When I left the Virgin Islands on Wednesday, March 11 for a short trip to Austin, Texas, things seemed mostly like business as usual. A brief COVID-19 scare in the …

END_OF_DOCUMENT_TOKEN_TO_BE_REPLACED 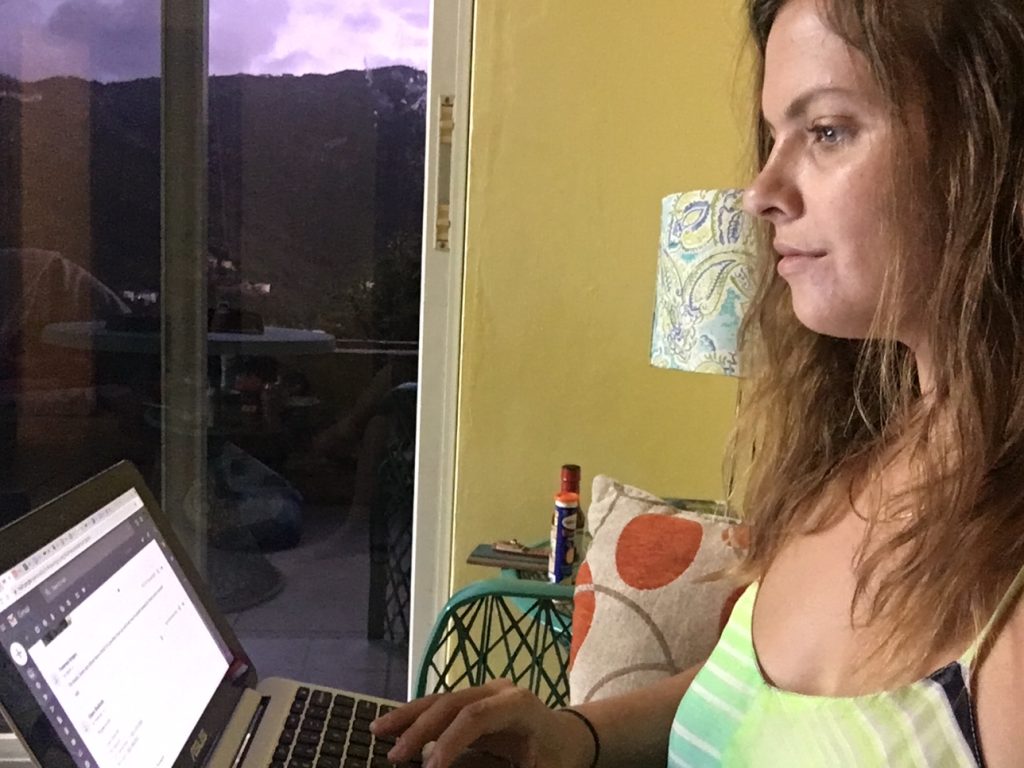 Beacon Business Editor Claire Shefchik worked from her home in Cane Garden Bay during the first full day of her 14-day self-isolation period on Tuesday, a task that included taking this photograph of herself. (Photo: CLAIRE SHEFCHIK)

When I left the Virgin Islands on Wednesday, March 11 for a short trip to Austin, Texas, things seemed mostly like business as usual. A brief COVID-19 scare in the VI had resulted in negative test results. Ferries and airports were running as normal; the Cyril B. Romney Tortola Pier Park was still accepting cruise ships packed with passengers from all over the world. I had noticed that hand sanitiser was becoming harder to find around the territory, but the stores were still well-stocked with necessities.

Although SXSW, the music festival I had hoped to attend in Austin, had been cancelled in light of the mounting cases in Texas, nothing else I’d read convinced me not to go. Bearing that out, the airport in St. Thomas was as crowded as I’d ever seen it, and both planes I took to get to Austin were nearly full. Despite warnings, people didn’t seem to be cancelling their plans.

What a difference a week makes. At first, I tried to concentrate on enjoying my trip, though I couldn’t help perusing social media. False rumours on social media boards abounded, and not being on the ground it was difficult to sort out truth from fiction. However, when Premier Andrew Fahie announced a ban on cruise ships, the closure of multiple air and seaports, and cancellation of major events, it was hard to ignore. What’s more, the VI announced a screening process for certain people entering the territory, which was later revised to cover arrivals from certain areas in the US. Texas was one of them.

My phone started to ping with worried messages from my VI friends and colleagues, warning me I might get quarantined. But the VI’s guidelines were vague about what enhanced screening measures I might encounter upon return, or what the exact criteria would be for warranting quarantine for 14 days — which, if it occurred, would mean I couldn’t leave the house and nobody could visit me.

“No, you’ll just have to fill out a form,” someone else speculated. But I was tired of theories. I wanted to know. And only the authorities could answer that.

On the day of my Monday return to the VI, I was able to make contact with epidemiologist Harmony Massiah-Brewley of the BVI Health Services Authority, who was very helpful. Over Facebook, she asked for my recent travel history, which I gave her. After a few tense moments of typing, she came back with an answer: I would be subject to monitoring and advised to self-isolate for 14 days.

“We do advise that returning residents self-quarantine, especially if you’re coming from or transiting through affected countries,” she wrote.

I breathed a sigh of relief for myself, though the social media frenzy among my VI friends had only just begun. Return trip The difference between my outward and homeward journeys was stark. On Monday, I took nearly empty planes to Charlotte and St. Thomas, with a row to myself each time. A flight attendant kept handing me cookies, since there were plenty to spare. The ferry was equally empty, with mostly residents onboard, though about 30 brave visitors from the US chose to make the trip to the territory along with us.

“Close the borders now!” someone proclaimed on Facebook, pointing to several other Caribbean islands that had done so, and warning travellers they were dangerous and inconsiderate to risk infecting the VI’s populace for the sake of preserving their holiday. ng their holiday.

“If you love the BVI, don’t come here,” one poster stated. But with my life and work in the VI, I didn’t have a choice. I hoped people would understand that when I returned.

It must have been my imagination, but I actually felt a bit feverish — or at least warm — as we queued up on the dock outside the immigration windows to have our temperatures taken electronically by an officer from the Environmental Health Division. Wearing rubber gloves, she handed me a pen to fill in my two-page form, on which I had added all my contact information, declared all states and countries to which I had travelled, said I hadn’t been exposed to anyone known to have the virus, and confirmed that I wasn’t currently showing any telltale symptoms. The officer hastily gathered passengers’ forms in a pile, and after a question to clarify that I had visited only Texas, I was free to go on my way through immigration and customs, which were business as usual.

Although Ms. Brewley-Massiah had advised me over Facebook to self-isolate as much as possible and to call 911 if I began feeling sick, no one told me this at the ferry terminal. I didn’t notice anybody pulled aside for further screening, and though the officers took my contact information, they hadn’t yet followed up for monitoring as of yesterday.

As of press time I still haven’t shown any symptoms, but for the next 14 days I will be self-isolating at home, only going out for necessities.

Although my journey is over for now, the nervous behaviour in the VI has only begun. And with the territory one of the last Caribbean countries with no confirmed cases, it’s likely to get worse before it gets better.

“Word on the street is that we’ll run out food soon,” one friend posted.

However, I knew the cargo ships were still sailing, and the only reason for food shortages, if there were any, seemed to me that some people were panicking and overbuying. As a small island territory, the VI is more vulnerable than most to shortages of supplies, as is all too fresh in the minds of many residents after the 2017 hurricanes. Still, I was glad I stocked up before I left, and when I returned, I was given more provisions from a friend who was dashing off to his family in another country before the borders closed indefinitely.

With that, I couldn’t be the only one flashing back to the times of Irma, when the whole world was in flux, and no one, not even the experts, were able to say what would happen.

“One thing is for sure: Someday, we’ll look back on this and laugh,” my friend said. “Well, some of us.”