COVID-19 > RDA contracts up to almost $15 million this year

RDA contracts up to almost $15 million this year

The Recovery and Development Agency signed three contracts totalling nearly $1.75 million on Monday for projects including repairs to the Road Town Police Station and roadwork at Great Mountain and …

END_OF_DOCUMENT_TOKEN_TO_BE_REPLACED 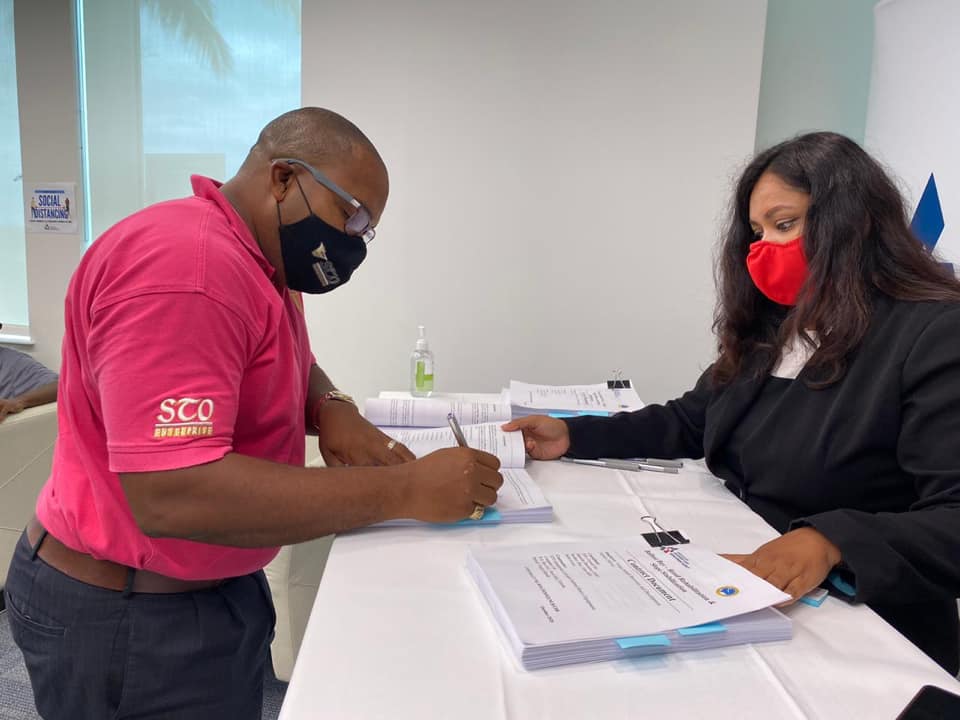 On Monday morning, three contracts totalling nearly $1.75 million were signed at the Recovery and Development Agency for repairs to the Road Town Police Station and the Ballast Bay and Great Mountain roads. So far, nearly $15 million in RDA contracts have been signed this year. (Photo: PROVIDED)

The Recovery and Development Agency signed three contracts totalling nearly $1.75 million on Monday for projects including repairs to the Road Town Police Station and roadwork at Great Mountain and Ballast Bay.

So far this year, the RDA has awarded nearly $15 million in contracts funded largely by the $65 million Caribbean Development Bank recovery loan, with a promise to spend at least $5 million more before 2021, according to RDA acting CEO Anthony McMaster.

He also announced that the RDA will establish an online link to connect contractors directly to future CDB loan opportunities and to make it easier for companies to submit tenders to the agency.

“We want to get our local contractors to the point where we are exporting contractors,” he said. “We want to make construction the third pillar of the economy.”

He added that the RDA plans to train five belongers to become project managers, providing training in project financing, record-keeping, and procurement monitoring and evaluation.

“We will have many, many locals who would have aspired, who would’ve trained, and who would’ve gotten the necessary knowledge and experience to take the country forward not just in the case of a disaster but to the point where we could export the services of the VI,” Mr. McMaster said.

He also thanked Premier Andrew Fahie for the “opportunity to be the implementer of projects,” and noted support from Governor Gus Jaspert.

Seven tenders were received by the submission deadline for the project to repair the Road Town Police Station, according to RDA Director of Procurement John Primo.

K and C Construction won the award, which is valued at about $245,000 and funded through the Ministry of Finance and the Deputy Governor’s Office.

Mr. Jaspert welcomed the police station project, explaining why it is important for security infrastructure.

“I believe … that those who serve and go out every day to keep us safe, we should make sure we’re doing everything to keep them safe,” he said.

The planned work includes improvements to the fencing outside of the police station and air conditioning inside of it, he added.

Deputy Governor David Archer said that the project is critical for visitors to feel safe in the territory.

Procurement for the Great Mountain and Ballast Bay projects was carried out in accordance with CDB loan procedures, according to Mr. Primo. Four bids were received for the first project, and seven for the second, he added.

Autland Heavy Equipment, Ltd. was recommended for both contracts, along with STO Enterprise Limited for the Ballast Bay works, Mr. Primo said. The recommendations were approved by the CDB.

Transportation, Works and Utilities Minister Kye Rymer said that with the projected increase of traffic on the road once borders reopen on Dec. 1, all roads and sidewalks need to be safe.

“If you know anything about Ballast Bay, it connects the entire [VI] to the western end,” he said. “The quicker that [the contractors] can get this road done will be good for everyone concerned.”

He also encouraged younger contractors to learn and partner with companies like Autland, STO, and K and C.

Autland, which is already at work on a section of Great Mountain road under a previous contract, also received a $447,461 contract to repair the road at Great Mountain “Site Two.”