In May, salvagers, marine surveyors and other contractors attended a workshop where they learned about a project that was slated to be the Recovery and Development Agency’s biggest yet: removing …

END_OF_DOCUMENT_TOKEN_TO_BE_REPLACED 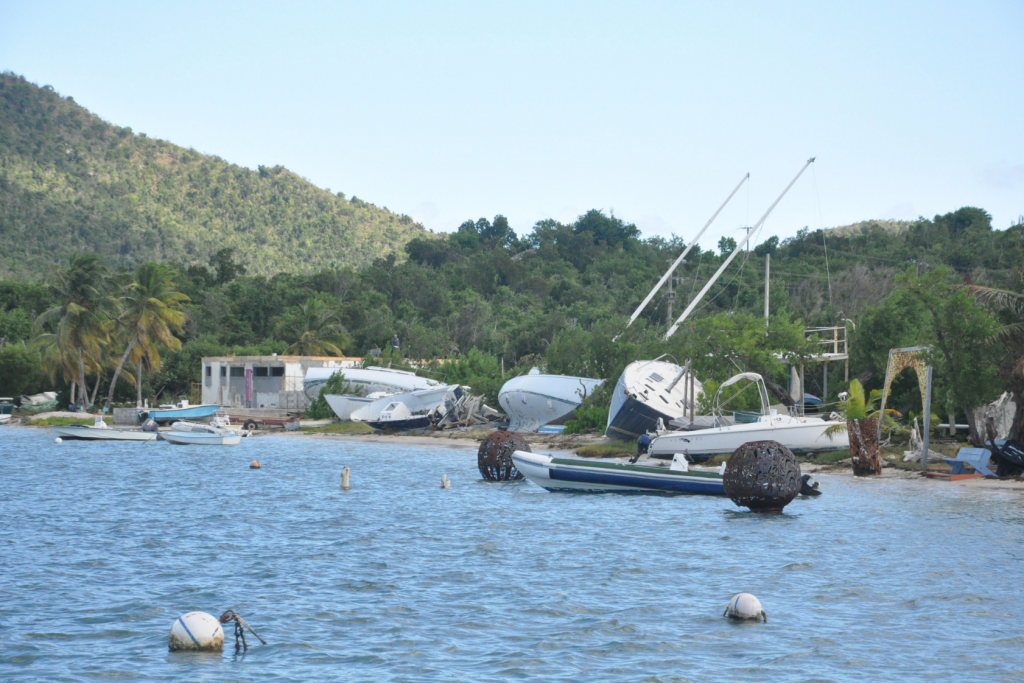 Derelict boats still line the shores of Trellis Bay more than two years after Hurricane Irma. A project to remove such vessels was cancelled for unexplained reasons. (Photo: JOEY WALDINGER)

In May, salvagers, marine surveyors and other contractors attended a workshop where they learned about a project that was slated to be the Recovery and Development Agency’s biggest yet: removing more than 200 derelict boats from the waters around the territory.

Starting in the summer, the selected contractor was expected to break down and discard boats stranded in seven areas.

But now, the tendering process for the project has been cancelled.

“After careful consideration of all factors, there are elements of the project that affect the ability to progress into the next stage of the procurement process. In the absence of specific timelines for the resolution of these matters, it has been decided not to seek an additional extension to the validity of the tenders” from Nov. 15, according to a Dec. 4 statement on the RDA’s website.

RDA Head of Communications Colene Penn declined to elaborate on why the tenders were cancelled or how much headway the RDA had made before scrapping the project.

“The statement is our communication on the matter, so all information relevant to the cancellation is included in the statement,” Ms. Penn said.

Though the RDA — which was established in April 2018 to lead the recovery effort for five years — reportedly has spent as much as $400,000 per month on operating costs, it has struggled to complete major projects, apparently because of a funding shortage amid tensions with the central government.

As of the second anniversary of Irma in September it had completed only four projects worth about $2.5 million and reported spending just $2.3 million more on contracts for eight others that were in the works.

The RDA has not fully explained its funding situation, however, and RDA CEO Paul Bayly has repeatedly declined interviews with the Beacon.

Captain Raman Bala, acting director of the Virgin Islands Shipping Registry, learned that the tenders had been cancelled recently while visiting the RDA’s offices to check on another project, he said.

An RDA official mentioned to him that the agency would not be proceeding with the boat removal, and when Mr. Bala asked why, the official “shrugged their shoulders, smiled and left,” Mr. Bala said.

He has yet to receive an explanation for why the RDA has sidelined this project, though he was surprised by this development given how much progress had already been made, he said.

According to Mr. Bala, boats had been identified and marked, and several meetings had been held with contractors who had submitted tenders.

“I don’t know the reason why this has [been cancelled], but I do know that there is a lot of work that has been done,” Mr. Bala added.

Chris Juredin of Commerical Dive Services, which had been asked by one of the tenderers to subcontract some of the work, said that the cancellation was “frustrating,” but he hopes that the RDA revisits the project at some point.

“It would be great for it to go ahead,” he said, adding, “For the territory as a whole it would be closure.”

The RDA’s statement also notes that the agency expects to issue a revised tender application after resolving the unnamed issues, something that Mr. Bala thinks is feasible given what has already been accomplished.

“If this project starts again, then I’m sure they’ll be able to get back to where they were,” he said.

This project was first announced in April, and in July 12 companies submitted tender applications, the most that the RDA had ever received.

RDA officials hoped to award a contract in August and begin clearing boats from the territory in September, according to a July 9 post on the agency’s Facebook page.

“This project will positively impact the territory’s tourism offering and play a major role in the beautification and cleanup of our environment,” the post stated.

While the submission of tender applications was announced via the RDA’s Facebook page, the agency announced both the invitation to tender and the cancellation of the project on its website.

There is no process the agency uses to decide whether the information is posted on social media or its website, Ms. Penn said.

“We use both channels to get our information out,” she explained.