New funding has been provided to facilitate repairs to the Road Town Police Station and the Magistrates’ Court from damage caused by the 2017 hurricanes, and three “deeds of contribution” …

END_OF_DOCUMENT_TOKEN_TO_BE_REPLACED 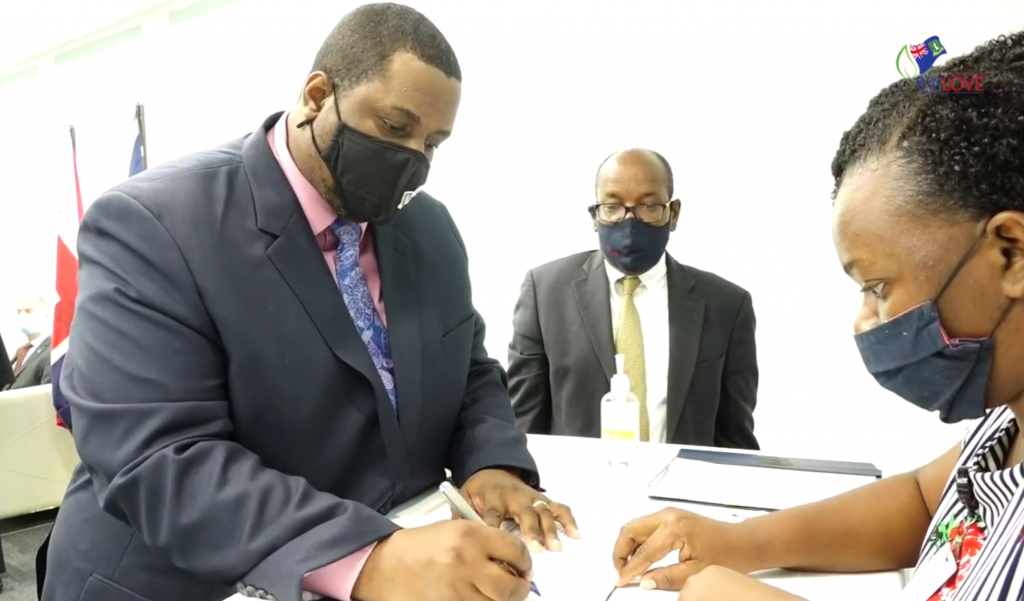 Leaders including Premier Andrew Fahie, above, signed three deeds of contribution on Monday to facilitate payments to the Recovery Trust to fund rebuilding of the Road Town Police Station and the Magistrates’ Court, facilities damaged by the 2017 hurricanes. (Screenshot: GIS)

New funding has been provided to facilitate repairs to the Road Town Police Station and the Magistrates’ Court from damage caused by the 2017 hurricanes, and three “deeds of contribution” signed Monday will help guide how the money is spent.

The funding will go into the Virgin Islands Recovery Trust, which was set up under the VI Recovery and Development Agency Act 2018 to accept contributions for rebuilding efforts, officials explained during a signing ceremony.

The trust is overseen by the VI Recovery and Development Board, which also oversees the RDA, and all funds that go into it are supposed to be used for recovery projects. RDA Director of Planning Neil Smith explained that Premier Andrew Fahie and Governor Gus Jaspert had made the contributions to the trust from the VI and United Kingdom governments to help facilitate the rebuilding projects, but they attached certain conditions as stipulated in the deeds of contribution. From the UK comes $70,000 for the police station rebuild, and $187,000 for the court, he said. The VI government matched the $70,000 contribution for the police station.

“This is an extremely, in my view, an extremely important concept that demonstrates a commitment to making sure that not only is the process transparent, but that the wishes of the individuals who are contributing to the recovery effort of the Virgin Islands … are carried out to the T,” Mr. Smith said of the deeds of contributions and other aspects of the trust spending process.

Mr. Jaspert said the signing day was an occasion for celebrating hard work and government partnerships.

Leaders prioritised repairs to the police and court facilities to reaffirm a commitment to promoting security and justice in the territory, he said.

“Nothing is more important in any place in the world … than that the people feel safe and that they feel that there is effective rule of law,” Mr. Jaspert said.

In funding the recovery process, he added, it is imperative to operate at the “highest levels of openness, transparency, accountability and good governance.”

The RDA, he said, has met those standards while working with global organisations.

To carry out the work of recovery, the governor said the territory must support its own capabilities to build infrastructure that will stand the test of time.

The UK’s newest financial contribution to the police station is in addition to the $1 million grant already dedicated to rebuilding police infrastructure in Road Town and West End, and the $650,000 for security on the sister islands.

Deputy Governor David Archer added, “Today, as we sign these critical documents, they represent hope for the Virgin Islands: hope for the police and their infrastructure to ensure the men and women who take care of us are well protected in their environment, and they can work and feel appreciated.”

Mr. Jaspert said replacing the temporary Magistrates’ Court — which cost $450,000 and still facilitates legal proceedings to this day — is only the first phase of constructing new halls of justice. This overhaul will include both infrastructure and technology upgrades to promote a more efficient judicial system, he said.

“These two further contributions today are a part of a continuum of a successful partnership to support this territory moving forward, and to support those core foundations to success,” Mr. Jaspert said.

He thanked the premier for his support in launching the halls of justice project.

Mr. Fahie said the project, formerly referred to as a “hall block” slated for renovation, has been discussed for a long time without much action.

He said improving facilities for the courts, schools and law enforcement has been a priority for government.

Mr. Fahie said after taking office he conferred with Caribbean Development Bank officials to review the $65 million CDB rehabilitation and reconstruction loan approved after Hurricane Irma and restructure the loan based on what projects could realistically be completed.

“They had so many projects given to them to do out of the $65 million, and it was impossible for it to be done,” Mr. Fahie said. “You would have started many projects and finished none because you do not have enough money.”

After renegotiations were complete, Mr. Fahie said the VI could proceed with other projects.

He added that Mr. Jaspert then proposed the $4.5 million halls of justice project, with $500,000 to be contributed by the UK and the remainder financed with a loan.

Regarding the police station, Mr. Fahie said the VI government matched 50 percent of the costs, and he was eager to see the rebuilding proceed.

He said the next project on the list is the West End ferry dock, for which he anticipated the RDA design contracts would be announced before the end of the year and the tendering process would commence at the beginning of 2021.

RDA acting CEO Anthony McMaster said that although plans for the halls of justice have been shelved for decades, “It is in the RDA’s hands, and you know it will be delivered.”

He said preliminary funds had already been earmarked for these projects by the Ministry of Finance, but the contributions allocated from the trust were needed to bridge a shortage and make rebuilding a reality.

He thanked Messrs. Fahie and Jaspert for propelling the developments forward.

“We are indeed a long way from recovery being complete, but it shows that when you remain hungry, you will get things done,” Mr. McMaster said.