Recovery and Development Agency CEO Paul Bayly is earning $350,000 per year in compensation, Premier Dr. Orlando Smith revealed during a House of Assembly sitting on Thursday in response to …

END_OF_DOCUMENT_TOKEN_TO_BE_REPLACED 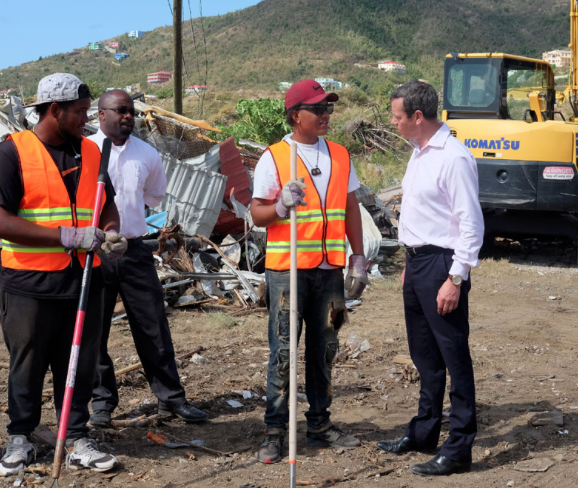 Paul Bayly, the CEO of the Recovery and Development Agency (right), speaks with a worker helping to collect hurricane debris in August. (FILE PHOTO: Amanda Ulrich)

Recovery and Development Agency CEO Paul Bayly is earning $350,000 per year in compensation, Premier Dr. Orlando Smith revealed during a House of Assembly sitting on Thursday in response to a question from Third District Representative Julian Fraser.

The disclosure comes after months of questions regarding the CEO’s remuneration, which Dr. Smith had previously sidestepped.

On Thursday, however, the premier said that Mr. Bayly, a New Zealand national who came to the territory in late July, receives an annual salary of $300,000 and an annual expense allowance of $50,000, in addition to one round-trip ticket per year for him and his family to return to New Zealand.

At Mr. Fraser’s request, Dr. Smith also provided a copy of Mr. Bayly’s contract, which takes the form of a June 19 offer letter signed by Mr. Bayly on June 25.

Under the terms of the offer, he was hired for an initial two-month consultancy and “then as a full-time employee” of the RDA for a period of five years, which can be extended two more years.

Dr. Smith (R-at large) has claimed repeatedly in recent months that government was still in negotiations with Mr. Bayly, despite the fact that the CEO was here working.

Earlier this month, Mr. Bayly also declined to disclose his salary, deferring to the RDA board of directors, and acting Chairman Clarence Faulkner declined to comment.

Mr. Bayly has held the position of permanent secretary of the Ministry of Infrastructure and Transport in Fiji, and he subsequently led the country’s recovery from a Category Five cyclone.

In response to another question from Mr. Fraser, Dr. Smith said the members of the RDA board receive an annual $9,600 stipend, with the exception of the deputy chairman, Clarence Faulkner, and chairman, Financial Services Commission Managing Director Robert Mathavious. The deputy chairman receives a $12,000 annual stipend, but no stipend was disclosed for the chairman, who the premier noted is a public officer.