Ask any Elmore Stoutt High School student about their number-one wish to improve their educational experience, and their answer is likely to be more space. “We have, like, 700 juniors?” …

END_OF_DOCUMENT_TOKEN_TO_BE_REPLACED 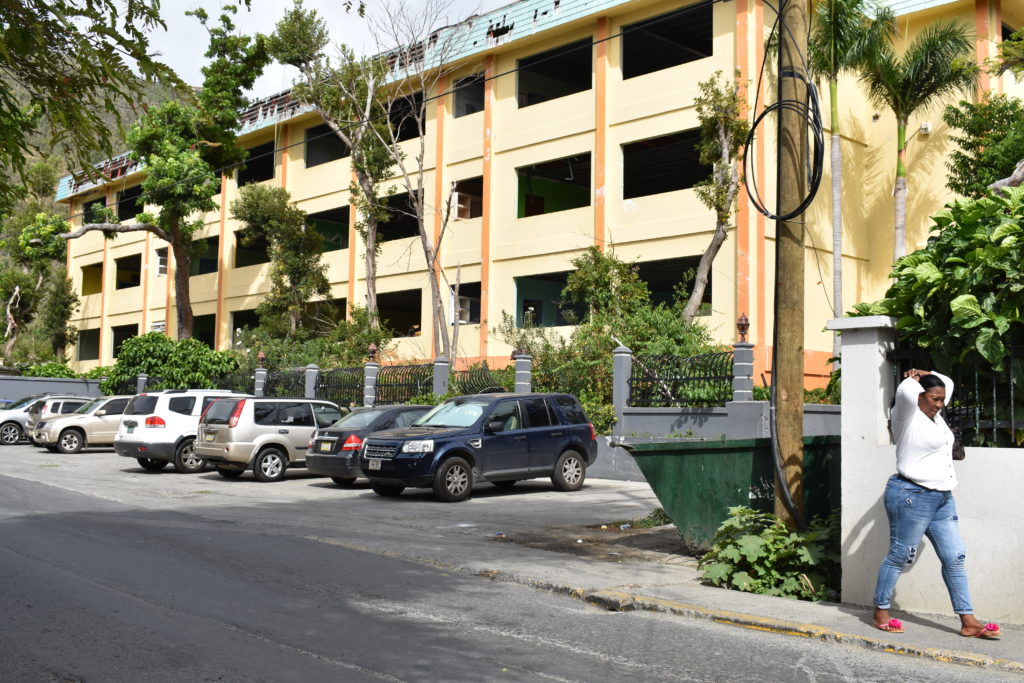 The L-shaped building pictured above ready for students before the end of 2018. (Photo: CLAIRE SHEFCHIK)

Ask any Elmore Stoutt High School student about their number-one wish to improve their educational experience, and their answer is likely to be more space.

“We have, like, 700 juniors?” said student Isabel Bahado, pointing across the road to her school, the former Clarence Thomas Limited building in Pasea, which was converted to serve the students after the main Road Town campus was gutted in Hurricane Irma.

She was waiting for a ride home at noon on Tuesday, watching her classmates rush out the doors into the busy commercial district surrounding the campus.

Meanwhile, a similar number of senior students were arriving to begin their shift.

“I think it’s a little bit of space, because even though after the hurricane some people went away…some parents decided to bring their children back,” she said.

“I’m not sure we have enough space for them to bring [them] back.”

However, with returnees, the school is now bursting at the seams.

“The noise would be the general problem,” said Malique Wattley. “We don’t have enough space, especially in the hallway.”

Xaria Victor agreed, saying, “You can’t hear anything. The teachers are so close up they can’t teach how they really want to teach. All the noise is crowded in one space. Upstairs it’s better, but downstairs you can’t hear yourself speak.”

Meanwhile, surrounding businesses have experienced issues such as vandalism and fighting that proprietors have blamed on students with nowhere to go.

The government has acknowledged such problems, but faces delays and challenges in responding to them.

Dr. Marcia Potter, permanent secretary in the Ministry of Education and Culture, told legislators during the recent deliberations of the Standing Finance Committee that enrolment has been increasing at ESHS, and registration for the 2018-19 school year has swelled.

She added that the school “cannot take on an increase in the number of children,” according to a report on the closed-door SFC meetings, which took place in March and April.

According to the ministry, the solution hinges on repairs to the L-shaped building at the school’s main campus in Road Town.

However, some students surveyed did not have high hopes of returning to the building soon.

“They haven’t even started yet,” said junior Daniel Lloyd. His friends nearby agreed.

They likely will have a while to wait.

On Monday morning, there was little activity on the Road Town campus besides some minor carpentry work in one of the smaller buildings. A few public employees were present, but declined to speak on the record.

In a statement released May 29, Education and Culture Minister Myron Walwyn said,“We continue to work assiduously to have the L-shaped building at the Elmore Stoutt High School repaired so that our students can return to a full day of school. It is our hope that this building will be ready in the first term of the new academic year.”

Originally, he added, the aim was to get the building open by September, but plans were delayed because of the “inordinate amount” of technical work that needed to be done.

Mr. Walwyn’s ministry has formally sought the assistance of the Ministry of Finance in requesting that the work at ESHS be added to the Caribbean Development Bank loan package, which he described as a “vigorous
and time-consuming process.”

“We understand that the current arrangement may not be the best, but despite the ministry’s commitment to the ESHS rehabilitation, there are several challenges and time-consuming procedures that have posed a threat to the September 2018 [opening date],” he explained.

Those procedures include selecting a consultant for the documentation of the rebuild; preparing detailed construction documents, including a bill of quantities in accordance with international standards; approving all product specifications, right down to finishes and doorknobs; and preparing tendering documents, which alone could take more than six weeks, according to the minister.

“We have made significant progress in the preparation of the bill of quantities, which included demolition works; electrical and plumbing works; purchase and installation of windows and doors; replacement of classroom partitions; painting works; and general cleanup of the campus area,” he said.

In addition, he added that the electrical system was destroyed by the hurricane, requiring a replacement of the main feed, panels, writing lights and fixtures.

Another challenge is that the CDB requires materials to be imported from a CDB member country other than the United States or Puerto Rico, where most of the territory’s goods come from.

After the work is complete, the minister said, only senior students will return immediately to the L-shaped building in Road Town, with junior students remaining at the former CTL building.

In the SFC report, the permanent secretary also said that officials were “struggling to find space” for 170 students to take overseas CSEC and CAPE exams.

The Multi-purpose Sports Complex was a possible solution, but the ministry is “trying to use the facility to house the junior students to help keep them off the street and to ensure that they do not get into any more trouble,” Dr. Potter stated, according to the SFC report.

The only private spaces identified for possible use cost some $18,000 and must be wired for Internet, due to the territory’s recent adoption of e-testing for the exams, which made it the only jurisdiction in the Caribbean to do so, according to the minister.

Meanwhile, near the temporary campus in Pasea, shop owners have reported vandalism, fighting, littering and other disturbances during school hours since the school was relocated. In April, an employee of Island Paints said he was assaulted after trying to videotape an incident involving students.

Chief Education Officer Connie George told legislators that the afternoon programme “was not as successful as they would have liked it to be,” partially also due to a lack of space, according to the SFC report.

She added that the only solution was to get the students into school full time, which will be dependent on the ministry finishing the L-shaped building in Road Town.

Meanwhile, she said, “Stringent measures are in place for those students who would violate and break the necessary rules in terms of fighting or disturbing the neighbourhood.”

Student Daniel Lloyd said he wishes there were more activity options after the morning shift.

“Last year, school got out at 3 o’clock, so I just did my homework and then I went to my bed,” he said. “But now we need more activities because we only have half a day.”

The first was transportation.

“Transportation between sister islands is important both for education officers, truancy officers and teachers to be moving back and forth for various reasons, as well as transportation in terms of paying bus drivers to move students,” she said, according to the SFC report.

She added that the government may not have enough funds for this type of transportation. In addition, money is also tight for scholarships.

“A number of other students who were seeking assistance to complete their education were unable to do so because the financing of the Scholarship Trust Fund has come to an end,” she explained, and suggested refinancing the CDB loan in order to address this issue.

Some students also complained about the amount of work that has to be crammed into the school day due to the limited hours.

“This school year was very stressful and hard for us,” Ms. Victor said. “Without a full day it became hard to get our work through to just catch upon school.”

Student Leanne Connor said teachers frequently say, “‘Turn it in quick, quick.’ You know how we have end-of-year exams? When we pass, we have another project due. We have five projects due in one day.”

Asked about her biggest wish for the next school year, student Tashia Edwards said, “We should have back our full day, so we can get our hours in class.”