Standing on a boat in the waters off Cane Garden Bay last summer, Atoya George, a government lab technician, peered into a screen displaying a video feed from a camera …

END_OF_DOCUMENT_TOKEN_TO_BE_REPLACED 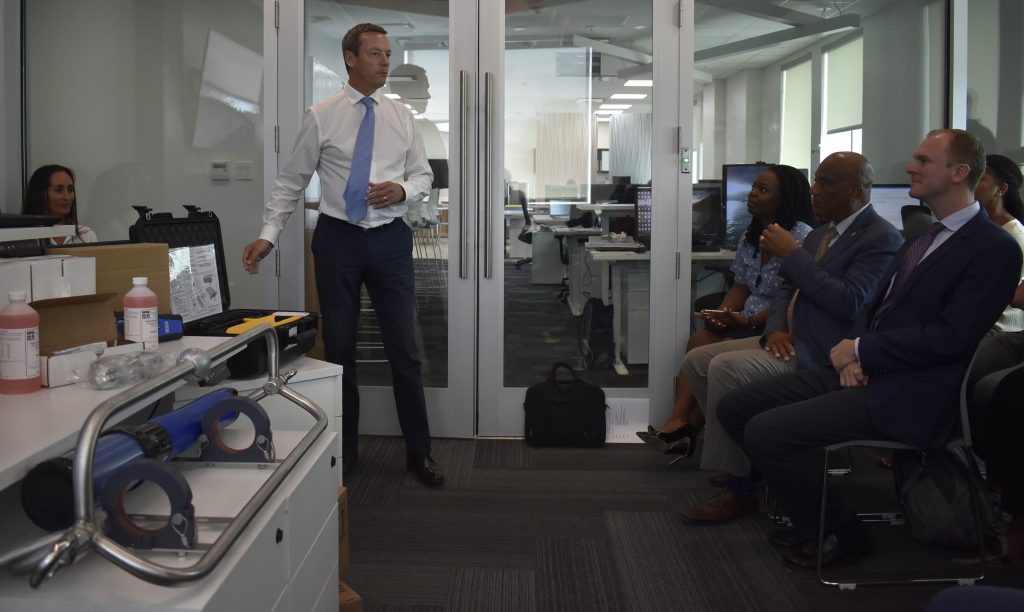 At a press conference last Friday at the Recovery and Development Agency, RDA CEO Paul Bayly explained the functions of some of the new equipment that will aid Virgin Islands officials in better understanding the territory’s ocean ecology. (Photo: JOEY WALDINGER)

Standing on a boat in the waters off Cane Garden Bay last summer, Atoya George, a government lab technician, peered into a screen displaying a video feed from a camera rigged atop a vehicle traversing the sea floor.

It was Ms. George’s first time using the technology, and navigating the vehicle proved difficult, but she enjoyed the challenge.

“It was really cool to see the things that were happening down there while we were sailing by,” said Ms. George, who works for the Ministry of Natural Resources, Labour and Immigration.

This underwater rover is part of a bevy of equipment recently procured by the Recovery and Development Agency to better explore the territory’s oceans, and Ms. George is one of several scientists and officials who have been learning how to use the new tools.

Speaking at a press conference at the RDA’s offices on Friday morning, NRLI Minister Vincent Wheatley said the new equipment and training, worth more than $42,000, will help leaders to gain a better understanding of what lies beneath the VI’s famous blue waters.

To gain a clearer picture, officials from the National Oceanography Centre, a science and research organisation based in the United Kingdom, visited the territory in July to teach VI scientists how to use the equipment, said RDA Programme Manager Saski Lang.

In the coming months, Ms. George and the other scientists will receive another round of training with the NOC to solidify their mastery of the new technology and also to learn how to conduct in-depth analysis of the acquired data, Ms. Lang explained.

“Marine spatial planning helps us organise our human activities within the marine environment,” Ms. Lang said before offering an example:

“Are there particular areas where we need to limit anchoring in order to ensure local biodiversity is protected in that area?”

Studying and protecting fish populations in the VI is one of the ways Argel Horton, a marine biologist in the NRLI Ministry, plans to use the trove of mapping equipment.

Ms. Horton, who is interested in the territory’s food security, thinks these tools afford powerful ways to examine the migratory paths and “hotspots” of fish species, which can benefit fishers, she said.

Much of Ms. George’s work, by contrast, centres on water quality in the territory, and she is excited by a new tool that can analyse the water in parts of the ocean currently inaccessible to such tests.

Rather than repeatedly returning to a certain spot — usually the shallow part of a popular bay— scientists will be able to attach the water quality reader to a buoy farther out in the ocean, where it can remain and amass data for up to three months before it needs to be cleaned and serviced, Ms. George said.

Additionally, it can test for some specifics that the VI’s current technology cannot measure, she added.

“This equipment will give us more information from farther out,” Ms. George said.

Because the water quality reader is a specialised piece of equipment, the RDA did not open a tender process to procure it but bought it directly from the Ohio-based company YSI Incorporated for $26,827.78, said John Primo, RDA director of procurement.

The rest of the equipment, however, was procured from two companies to which the RDA awarded contracts after a bidding process: the UK-based Ferritech Global Limited supplied a $9,529.95 package of equipment including the underwater camera, a sonar imaging device and other research tools, while Klass Electronics BVI sold the RDA computers and drones worth $5,822.

The total budget for the marine planning project is $230,000, with the Foreign and Commonwealth Office contributing $147,000, said RDA CEO Paul Bayly.

As the RDA, a UK science organisation and multiple government agencies worked together to secure the new technologies and teach VI officials to use them, the effort demonstrates why partnership is essential to executing the territory’s goals, Mr. Wheatley said.

He added that he hopes the new equipment will help preserve the VI environment and make the territory a “centre of excellence” for marine survey studies.