All that remained of about eight months of hard work were two piles of still-smouldering rubble yesterday afternoon. Green VI reported that a fire the evening of Feb. 23 spared …

END_OF_DOCUMENT_TOKEN_TO_BE_REPLACED 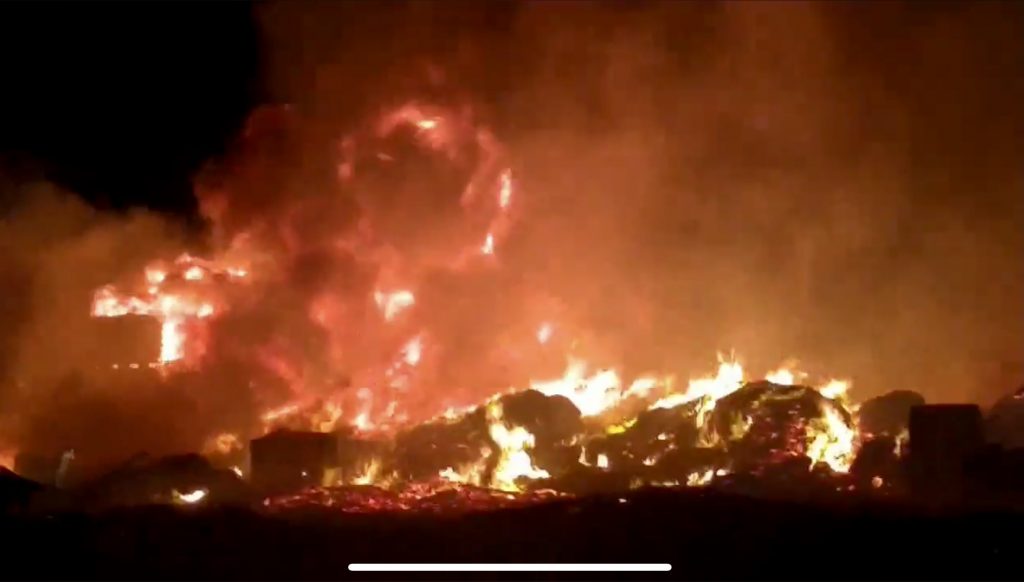 As shown in a video Henschel George shared on Facebook, a fire blazed near the Green VI recycling facility the evening of Feb. 23. Green VI said in a press release the fire didn’t damage the facility but did destroy more than 100 bales of plastic and aluminium. (Photo: HENSCHEL GEORGE)

All that remained of about eight months of hard work were two piles of still-smouldering rubble yesterday afternoon. Green VI reported that a fire the evening of Feb. 23 spared its recycling centre and equipment, but took out 98 bales of plastic recyclables and eight bales of aluminium that had been processed and were awaiting export.

“To the best of our knowledge, there has not been damage to any other areas of the Paraquita community,” the non-profit organisation stated in a press release. “The detrimental effect of the smoke from the burning is, of course, heartbreaking.”

Video of the fire sprung up in “The REAL BVI Community Board” at about 9 p.m. Tuesday evening. Henschel George posted the images, commenting that “the fire is huge… and water truck don’t have enough water at the moment.”

Green VI collects and processes recyclable material around the islands and processes it for either shipment out of the territory or for use by private businesses. At about 20,000 plastic bottles per bale, the damage was extensive.

“This represents many months of hard work, and we are saddened by the setback,” Green VI wrote.

Green VI team member Ivy Paris said she saw the red flames from over the hill that evening and hoped it wasn’t the facility. But when she arrived a short while later, she saw that the field was burning.

Ms. Paris said the team is grateful that even though the fire was widespread, first responders could contain it and prevent a neighbouring farm and the college campus from catching fire as well.

Canny Brathwaite added that by the time a third water truck came around 10 p.m., the fire was mostly under control. She said the best way community members can lend a hand at the moment is to reduce the amount of water bottles they use — which accounted for about 80 percent of what burned.

They said Green VI plans to take measures to better deter unauthorised dumping at its site and continue operations as best it can.

The nonprofit said the recycling centre and processing equipment were separate from the burned area, and it is grateful no one got hurt.

“We are extremely grateful to the Green VI team members that reported and responded immediately to this situation and to all the firefighters, police, water trucks and other first responders,” the release stated.

It also indicated that a neighbour and Green VI staff were the first to notice and report the fire, noting that it “mysteriously started in dry bush that was being stored for chipping into mulch for farmers.”

“We had recently installed a chain across the entrance to this area to stop random trucks from dumping appliances and other miscellaneous waste,” Green VI wrote.

Chief Fire Officer Zebalon McLean said on the afternoon of Feb. 24 that a few embers remained but the fire was under control and posed no danger. He confirmed that no structures were damaged.

Mr. McLean said fighting the blaze was a challenge given the swirling winds, heavy smoke and low water pressure from nearby hydrants.

“The layout made it relatively easy to get to the fire, but then we had the swirling winds,” he said. “The actual site itself was spread out over a wide area. There was only access to the east, not in any other directions. If you can only come from one direction, when you get the fire out on the front end, then you have to walk through the burned area to get to the other end. If you can imagine, the heated ground compromising the dexterity of the hoses posed a bit of a problem.”

But first responders had plenty of space to work in the area by the H. Lavity Stoutt Community College, he said, adding that firefighters were on the scene from around 8 p.m. to 4 a.m.

Besides the bales, he said some items that may have been dumped at the site were damaged by the fire. He said the investigation was ongoing and he couldn’t confirm if any dumped items were involved in igniting the fire.