Local News > Recycling in the time of Covid

Recycling in the time of Covid

END_OF_DOCUMENT_TOKEN_TO_BE_REPLACED 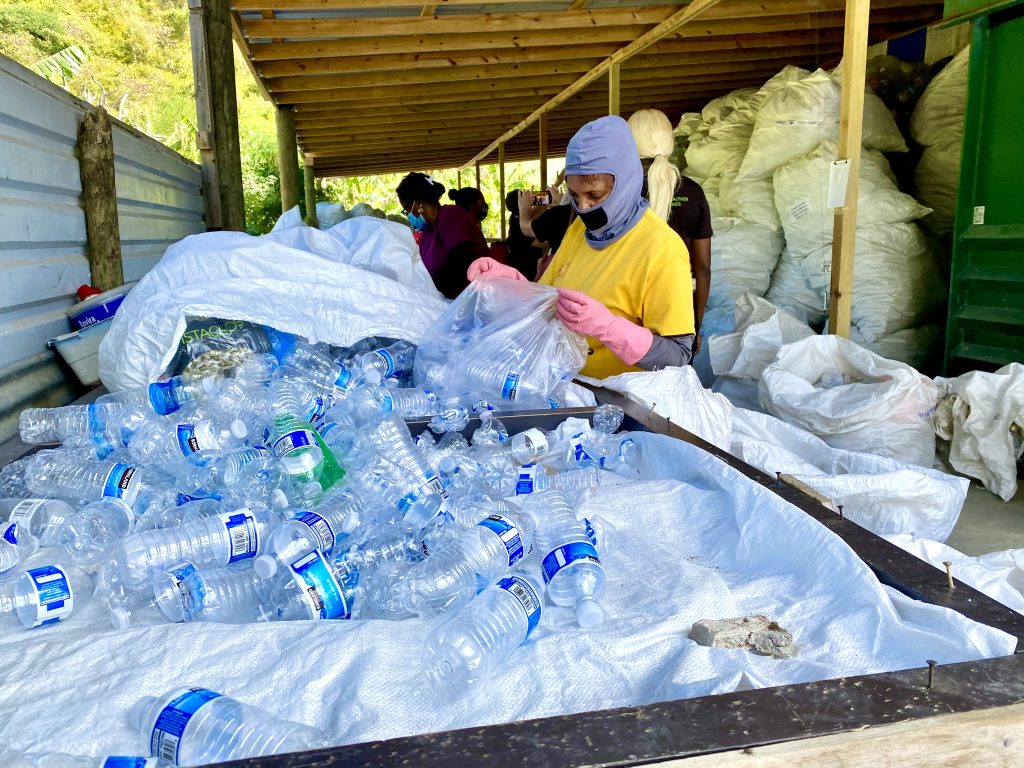 Single-use water bottles quickly became the bane of recycling efforts in the Virgin Islands in the aftermath of the 2017 hurricanes. However, Green VI is collaborating with private businesses and government to try reducing the territory’s dependence on them and recycle certain plastics — like those pictured above being sorted on Friday at the nonprofit’s processing site — through innovative projects, with an eye toward more sustainable waste management in the long term. (Photo: DANA KAMPA)

A walk to the Green VI recycling site in Paraquita Bay leads to stacks upon stacks of cubes made up of compressed plastic water bottles — a particular thorn in the side of waste management efforts since the 2017 hurricanes. According to experts leading a tour of the site on Friday, each cube holds approximately 20,000 bottles.

Green VI staff told the Beacon last week that their efforts to recycle plastic and other materials have kept more than 3,200 tonnes of waste out of the territory’s landfills since 2017. But in order to continue expanding on that mission, they said, the Virgin Islands community must work together to overcome long-standing challenges with waste management.

The need for efficient waste management services was thrown into sharp focus during the territory’s 24-hour daily lockdown at the beginning of the pandemic last spring.

Until door-to-door waste collection launched, residents had to hold on to their trash. Government encouraged community members to sort and clean recyclable materials in the meantime.

Behind the scenes, Green VI staff members pulled long hours to build and install recycling bins throughout the territory before the partial lift of the curfew. In a matter of weeks, they increased the number of drop-off sites from seven on Tortola and 10 on Virgin Gorda to 46 total locations.

“A team of five of us built all those bins that you see,” said Green VI Deputy Director Sarah Penney.

Since then, staff and volunteers have continued working to meet the increasing demands and educate residents about how recycling works in the territory.

One of Green VI’s current undertakings is replacing those original bins — which were made from repurposed pallet wood — with more durable “polywood” bins made from the very plastic that the nonprofit partners with the firm VI Plastics to recycle.

Last week’s tour started where the recyclables are sorted.

More than a dozen students were busy that morning, standing under the shade of a workshop located just northwest of the H. Lavity Stoutt Community College campus.

They stood at a lengthy row of tables, where staff members showed them how to identify each of the seven categories of plastic containers.

Some items — like foam egg cartons, plastic wrap and some plastic bottles — are the perfect makeup to turn into polywood; others need to be crushed and sent to other countries capable of recycling them.

On Friday morning, the bags of pre-sorted recyclables were piled up to the ceiling of the single-storey building and spanned much of the yard around it. One by one, they were carted by staff to the sorting tables.

From there, staff piled the materials into a compactor to make bales of aluminium and plastics in under a minute as the machinery whined and bottles popped.

In recent years, Green VI went from employing six people to its current staff of 25, though some of those workers were brought on primarily for the duration of a recent grant as the non-profit began focusing more on job creation since the arrival of Covid-19.

Ms. Penney said three carpentry teams, made up mainly of people who lost their jobs during the pandemic, are working to assemble the polywood recycling bins.

Once the materials are baled, Green VI has to devise a way to either process them here or ship them to a country that can assist for a reasonable cost.

Though other recycling plants will pay for the materials, often that income barely offsets the cost of shipping.

In the beginning of 2020, Ms. Penney said, a partnership with a family-run recycling company in Canada allowed Green VI to sell plastic from water bottles for about as much as it cost to ship, at about 13 cents per pound.

But worsening market prospects made it more difficult to break even as manufacturers reduced their operations during Covid-19 outbreaks.

The VI has also sent aluminium to Puerto Rico for consolidation.

Charlotte McDevitt, Green VI’s executive director, said the nonprofit recently sent a 40-foot container of grade one plastics to be converted into new plastic water bottles. But the value didn’t cover the shipping costs, much less the cost to collect and process, she explained.

“It’s just not a viable business for a private recycler,” she said. “That’s why it has to be subsidised by government, and you need that legislation and the long-term funding mechanisms to keep it going.”

Success, she added, also requires negotiating with other companies — and ideally reducing the amount of waste coming to the Green VI facility in the first place.

She said a big part of the organisation’s future goals involves educating businesses and individuals about all three prongs of the well-known phrase “reduce, reuse, recycle.”

For example, Green VI worked with the Dr. Orlando Smith Hospital on providing eco-friendly food containers in its kitchens, she explained.

So far, 41 VI businesses have participated in the programme.

Green VI helps by offering information like how to provide drinking water in an office setting while generating the least amount of plastic possible.

Ms. McDevitt said she hopes Green VI can eventually focus primarily on such work, rather than taking on more responsibility for the collection and operations side of recycling.

If government partners are able to take over collection, for instance, non-profits will be in a position to put their energy into pioneering new ways to protect environmental health, she explained.

“A lot of philanthropists would rather take a risk with a non-profit,” she added. “We are more mobile.

“Our reporting is good. We can test things and see what works, then put it in an academic format that can be shared.”

In April 2019, Green VI signed a memorandum of understanding with the Ministry of Health and Social Development to implement a recycling system across the VI.

However, Ms. McDevitt explained that maintaining funding for such a large operation has been challenging given the export costs.

Government, however, announced recently that a new waste management plan is in the works to more comprehensively address trash disposal, recycling and more.

Health and Social Development Minister Carvin Malone said in a Dec. 31 sitting of the House of Assembly that a team from his ministry and Agency Red, a Swiss consultancy firm re-examining the territory’s comprehensive waste management strategy, completed their consultation and would be gathering public input early this year.

He added that the ministry would then issue a request for proposals for waste collection and “other measures aimed in maintaining a clean and healthy environment.”

Ms. McDevitt said an important component of that plan should be waste reduction.

For example, she explained, other countries in the Caribbean operate bottle buy-back programmes that pay consumers for returning bottles that can be sanitised and reused rather than ending up in landfills.

Other countries have enacted legislation that mandates fees for single-use materials in order to help cover the cost of recycling.

Ms. McDevitt added that the VI needs to enact some combination of buybacks, fees or bans to reduce the amount of waste in the territory. Otherwise the recycling programme won’t be feasible to continue, she explained.

One way Green VI is recycling plastics within the territory’s borders is by partnering with private businesses like VI Plastics.

Friday’s tour led to its shop in Parham Town. The orange workshop contains a bustling suite of machinery in a steady cycle of shredding, mixing, heating and moulding.

A colourful confetti of shredded plastics and blue, black or green powdered dyes goes into a machine in the workshop. The mix is heated enough to combine but not fully melt, meaning it doesn’t give off potentially harmful byproducts like an incinerator would, according to Carrie Wright, the business’s Canadian originator.

The heated dough then goes into the long metal moulds, forming the pieces of polywood for projects like Green VI’s recycling bins or for made-to-order outdoor furniture.

Still, Ms. Penney said it’s a challenge to find the right balance in supporting local businesses that can utilise the recycled plastic without oversaturating the market.

Ms. Wright, who runs VI Plastics, said she first became interested in recycling while on vacation in the territory in 2014.

She saw the lack of recycling options available and started brainstorming ways to help. Inspired by the recycled glass art she observed at Green VI’s glassblowing studio in Cane Garden Bay a year later, she explored what to do with plastics.

The job seemed nearly overwhelming in the early days, when just a few people were tasked with collecting recyclables from the bins. But eventually the operation grew in partnership with Green VI.

The venture has been a learning process, especially when it comes to the ratios used to make polywood: She said if too many single water bottles are used (more than 10 percent of the batch), the mixture becomes overly sticky and rough textured. This is especially challenging when approximately 60 percent of the incoming recyclables are plastic bottles.

But the team is exploring new ways to make use of the material, like as a filling for canvas-covered beanbag chairs.

Ms. Wright also said keeping the business up and running during the pandemic has been a challenge, especially considering that it introduced its furniture line last March — the same month Covid-19 hit the territory. VI Plastics received one of the $6,000 small-business grants government provided in its initial economic relief plan, which she said was very helpful.

But companies that would typically have the capital to purchase her high-end furniture simply don’t have much budget flexibility now, she said.

However, she shared hope for a more sustainable future in the VI despite these challenges.

“We can really do a lot just out of intentional choices when we look at our individual purchases and waste that we’re producing,” she said. “There are lots of ways for us to reduce our waste.”