Hundreds of people celebrated Earth Day this weekend in Road Town at the Queen Elizabeth II Park. Adults and children alike helped design a non-toxic, washable mural along the shoreline …

END_OF_DOCUMENT_TOKEN_TO_BE_REPLACED 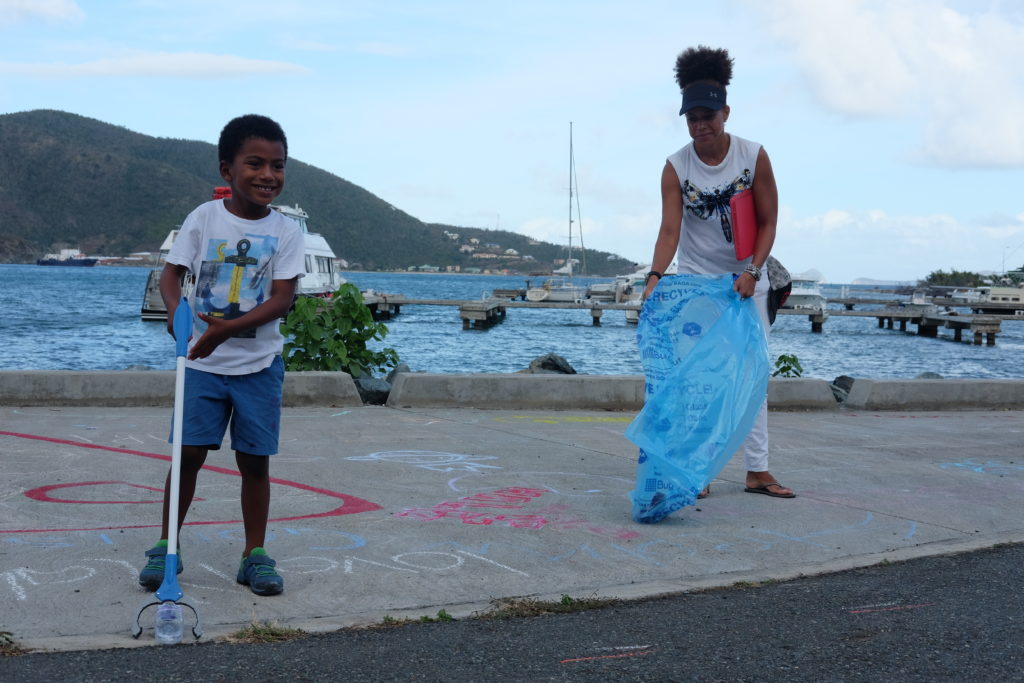 Adults and children alike helped design a non-toxic, washable mural along the shoreline walkway, collected litter around the area, turned trash into art, and learned about green initiatives on Sunday.

There was also one simple focal point of the event typically not seen on the island: recycling bins, including one made entirely out of old shipping pallets.

Local recyclers are in the midst of rolling out a recycling project across the Virgin Islands, starting in Virgin Gorda and Tortola.

In collaboration with private recycling companies, the Department of Waste Management and a recycling committee established last year, the nonprofit organisation Green VI is beginning to provide recycling bins to schools and public spaces.

Sarah Penney, deputy director of Green VI, pointed out some of the new models at the park on Sunday.

“Those are demonstrating to people what they’re going to be seeing,” she said. “The goal right now is to have bins at all the [Virgin Islands] schools, and we’re starting on Virgin Gorda and Tortola. You’re going to see the ones in Tortola in probably the next month.”

Before Irma, a recycling pilot programme had already been launched on Virgin Gorda. At the time, residents could drop off recyclables at several locations.

Local recyclers’ plan was to assess the pilot project before implementing a similar system on Tortola and the other sister islands.

But after the storm, they had to start from scratch.

“We’re basically redoing the infrastructure on Virgin Gorda, because all of the bins were lost,” Ms. Penney said.

VG resident Rashley Bob is the entrepreneur behind the new batch of bins made from wooden pallets, which will replace the DWM ones that were destroyed.

Ten bins will also be placed at schools on Tortola in the near future. Carrie Wright, founder of VI Plastics, is making those out of recycled plastic, a process that takes about eight hours to complete, Ms. Penney said.

“It’s taken a while to get to this point, mainly because of the back end of logistics, of how you get recyclables where they need to go,” she added.

Overall, plastic recyclables will go to Ms. Wright to be transformed into furniture and polywood (a “closed loop” of recycling, Ms. Penney explained) and glass will be taken to Julie Swartz of Green and Clean VI, who will turn it into aggregate for roads and other projects.

The next step is putting recycling bins in local businesses and, eventually, homes.

“Commercial businesses are responsible for their own waste management, technically. So if we just get everybody involved there are opportunities for small businesses in terms of movement of recyclables,” Ms. Penney said.

The Green VI deputy director said there are also plenty of opportunities for budding entrepreneurs who might be interested in starting a small business.

“If anyone wants to become a philanthropist in the green world, there’s an ample need. It’s not a profitable industry, and yet it’s something that affects all of our lives,” she said.

Green businesses, farmers, local authors and entertainers all contributed to the event on Sunday.

Near the water, dozens of children decorated the sidewalk with messages about Earth Day in washable paint and chalk, while the steel pan band Sounds of Steel played nearby.

The BVI Wombles — a group working to pick up litter and dispose of debris across the territory — came out in full force, leading a cleanup loop around the QEII Park, the Tortola Pier Park and then back through Main Street. The cleanup eventually ended in a trash relay race.

One of the organisers on Sunday, Melissa Kearns, said she was grateful the event had such a large turnout. Earth Day was the first event she attended on Tortola after she moved to the island last year, she said.

“Coming from Canada, we’ve been recycling and doing similar things for years, so I thought: ‘What can I do to help this?’ It pains me, you know, every time I throw away a plastic bottle. So I wanted to see how I could be a part of making things better, of working towards changing this,” she said.