With government facing a lawsuit seeking to legalise same-sex marriage in the Virgin Islands, Premier Dr. Natalio “Sowande” Wheatley announced on Monday that the public will get to air their …

END_OF_DOCUMENT_TOKEN_TO_BE_REPLACED 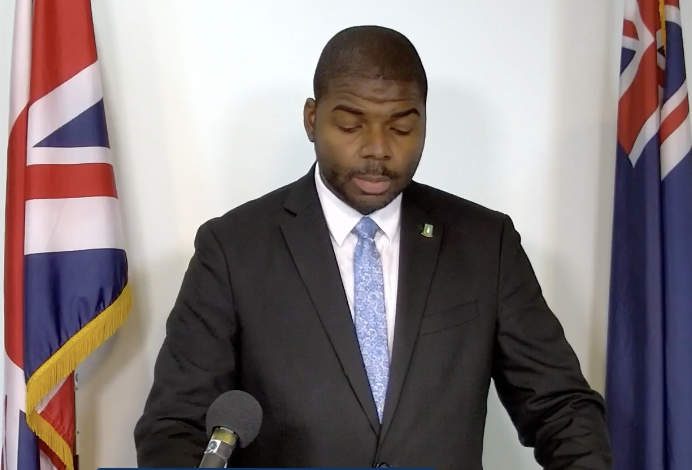 Premier Dr. Natalio “Sowande” Wheatley made an announcement on Monday stating that the government would host a referendum to discuss the issue of legalising same-sex marriage in territory. (Photo: SCREENSHOT)

With government facing a lawsuit seeking to legalise same-sex marriage in the Virgin Islands, Premier Dr. Natalio “Sowande” Wheatley announced on Monday that the public will get to air their views on the subject during the territory’s first-ever referendum.

Virgin Islanders Kinisha Forbes and Kirsten Lettsome sued the government last year, claiming that the registrar general denied them a marriage licence on Feb. 2, 2021 because they are of the same sex. The defendants — who have been legally married under United Kingdom law since 2019 — are asking the court to declare that their marriage is valid under VI law and that prohibiting same-sex marriage is unconstitutional.

They are also asking for the court to void and declare unconstitutional section 13(c) of the 1995 Matrimonial Proceedings and Property Act, which states that a marriage will be void if “the parties are not respectively male and female.”

In their filing, the claimants argued that the prohibition of same-sex marriage contravenes several sections of the Constitution, including section nine, which declares fundamental rights and freedoms of all individuals regardless of sexual orientation.

The government, however, is defending the status quo, the premier explained Monday while announcing the referendum.

“In response to this legal challenge, the Virgin Islands government, who is the respondent in this case through counsel in the Attorney General’s Chambers, is vigorously defending our laws, which clearly provide that marriage should be between a man and a woman,” Dr. Wheatley said in a Monday announcement broadcast on Facebook. “Importantly, also, we are defending the ability of the democratically elected legislature of the Virgin Islands to make legislation on this issue.”

He went on to say that “weighty matters of social and religious significance must not be decided in the courts or elsewhere.”

“It is our belief that the people of the Virgin Islands must speak clearly and loudly on their views on marriage, and that legislators should be obligated to comply with their wishes,” he said. “Therefore, in a special meeting of the Cabinet of the Virgin Islands held on Friday, Cabinet decided to refer the matter of same-sex marriage to a referendum, so that the electorate can consider and decide on the question of whether same-sex marriage should be legal.”

The referendum, he added, will be the first in the history of the Virgin Islands.

“This referendum will also consider the question of whether new legislation should be introduced to provide persons in a domestic partnership with certain legal rights, such as the ability to pass on one’s estate to their partner regardless of sex, in intestacy,” he said. “This approach takes into account our obligations under the European Convention on Human Rights while protecting the sanctity of marriage.”

The VI court case was scheduled to be heard at the end of September, but it was delayed after last-minute legal manoeuvring by the BVI Christian Council found favour with Appeals Court Justice Gerard Farara.

The claimants are represented by former VI Director of Public Prosecution Terrence Williams of the Jamaica-based firm Public Law Chambers, as well as Karlene Thomas-Lucien of the VI-based firm Chase Law.

Same-sex marriage has been a controversial topic in several of the UK’s 14 overseas territories in recent years.

In 2019, a report by the UK House of Commons’ Foreign Affairs Committee advised the UK government to force the OTs to legalise the practice.

But the UK government responded by saying it had no plans to do so, instead pledging to continue encouraging OTs to “recognise and protect same-sex relationships.”

In two other OTs, couples have sued to challenge bans on same-sex marriage, but they lost before the Judicial Committee of the Privy Council, the OTs’ highest court of appeal.

On March 14, the Privy Council ruled that the Cayman Islands Constitution does not provide a right for same-sex marriage, as it dismissed an appeal brought by a female couple seeking the right to marry in the territory, according to the Cayman Compass.

Instead, the Privy Council ruled that the right to marriage under the Cayman Bill of Rights is confined to opposite-sex couples.

The judges added that this interpretation of the Bill of Rights does not prevent Cayman’s parliament from introducing legislation recognising same-sex marriage. The parliament, however, has not done so.

Similar events played out in Bermuda. There, same-sex marriage was legalised in May 2017 after a male couple successfully sued the government. But the territory’s parliament responded later that year by passing a law to ban same-sex marriage and establish domestic partnerships instead.

The ban was challenged in two lawsuits, and same-sex marriage remained legal in Bermuda while the matter worked its way up to the Privy Council.

On March 14 — the same day as the Cayman ruling — the Privy Council ruled in favour of the Bermuda government, and same-sex marriage was banned once again.

The Bermuda legislature, however, later passed an amendment that validated same-sex marriages carried out during the five-year legal battle.