Remembering Irma in the Covid age

END_OF_DOCUMENT_TOKEN_TO_BE_REPLACED 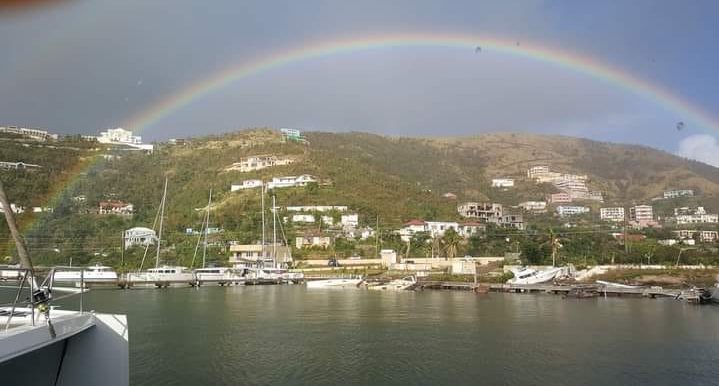 On the anniversary of Hurricane Irma, community member Vanessa Mathura-Audain joined a virtual photo contest, sharing this photo her coworker took while they surveyed Hodges Creek several months after the storm, when a rainbow stretched across the bay and gave them new hope. (Photo: JEINY VINZEN)

A recent uptick in cases of Covid-19 in the Virgin Islands meant that community members couldn’t host any sort of large gathering on Sunday to reflect on the past three years of recovering from hurricanes Irma and Maria.

But those who lived through the storms utilised social media to reconnect, share “then and now” photos, and reflect on what’s changed in their lives.

Maureen Peters, author of Irma Brings Love, said in a Facebook post reflecting on the past few years that it is important for people to be there for one another, especially at a time like this. “Looking back, there were so many blessings,” Ms. Peters wrote. “People opened their homes to neighbours and strangers, looked out for one another and shared what they had with a willing heart. Let us take a moment to give thanks for the privilege to be on the land of the living these many years later.”

Other community members got creative with photos. Via “The REAL BVI Community Board,” Riina Amalie Aab started a contest for people to share their best photos of the storm’s aftermath. She urged participants to let the photos speak for themselves.

Ms. Aab said she was inspired to launch the informal contest to bring a little positivity to the community in such tough times.

“I wanted to bring people together and concentrate on something else: … on art done by us dedicated to something we had in the past,” she told the Beacon. “Pictures could say much more than words.”

Commenters shared photos of patched car windows, catamarans perched on buildings, torn roofs, families walking among the wreckage, an emu on the loose and more. One photo taken several months after the storms showcased a rainbow stretching across a boat-filled bay.

“This was a few months after Irma so most of the wrecks were already removed but that beautiful rainbow was telling us everything will be all right,” wrote Vanessa Mathura-Audain.

John Campbell assembled a video of historic moments from the pandemic and hurricane, but also happier times, set to the tune of the territorial song and music by local artists. Mr. Campbell encouraged community members to stay strong and to again do their part by slowing the spread of Covid-19.

Some Facebook users shared photo albums from the past, including one that Ashley Bailey created days after the storm. In one side-by-side set of photos, rolling green hills turned brown where high winds had ripped away the leaves from the trees.

The album’s comment section functioned as a time capsule that included comments from the immediate aftermath, the one-year anniversary and this Sunday. Recent commenters talked about what it was like repairing the damage, and shared their hopes that the remainder of this year’s hurricane season is quiet.

‘How far we reach’

Jerome Edgar Morton sparked some thoughtful discussion with his post of a side-by-side view looking down on Road Town three years ago and today.

“We have something to give blessings for,” Mr. Morton wrote. “Look at our town. Look how far we reach. Look at the green. Look how many people build back stronger n better.”

Marva Smith replied, “These pictures speak a thousand words. That dark grey is no lie. Now it’s so heart warming to see the beautiful colours coming back.”

Ms. Smith also shared a bit of scripture, Isaiah 40:31, with the Facebook group and discussed the great strides the VI has made on the long road to recovery.

“If someone were to visit the Virgin Islands they might be enamoured by our beauty and not be aware of what we’d been through. I don’t blame them,” she wrote on the anniversary. “But below the surface we’ve struggled through a lot of dark nights (literally — months and months without electricity — and figuratively) and I believe we’ve come out stronger.”

Dozens of people also chimed in on a post from Dean Greenaway about their memories from the morning of Sept. 7.

“I walked out of my house numb from looking at the damage on my property,” Fayola Wilson-Creque replied. “It changed to shock, then tears as I walked towards the Ridge Road and looked down into Road Town and saw the utter destruction. Neighbours hugged and cried.”

VI residents also expressed gratitude for those who came to help the territory in desperate times. Claire Hunter, author of The Survivor’s Guide to Monster Storms, thanked the people who came from Puerto Rico to offer aid, who then had to deal with their own destruction two weeks later when Maria hit.

“As we now enter the peak of the 2020 hurricane season, remember that simple, consistent preparation and staying informed is possible and will make all the difference,” Ms. Hunter wrote.

Irma survivors still living abroad shared their memories as well. Diandra Jones, who is now a teacher in Hawaii, recalled hiding in a bathtub in her Tortola home while Irma was “shredding our home, our island, our reality” over the course of eight hours.

Three years later, as a new mother, Ms. Jones wrote, “Not that I would choose to go through a Cat-5 PLUS hurricane ever again, but I am grateful for how it all worked out.”

Three years after the storms, Premier Andrew Fahie reflected on the losses community members experienced, including homes, jobs, personal possessions and hope. In a statement shared Saturday on Facebook, he acknowledged the trauma many people experienced.

“Etched in our mind forever [are] the many long hot days and nights after spent in the pitch dark that tested our faith and our resolve to dream of a better day,” he said. “But in contrast, during this difficult moment in time, the same events that shook our faith strengthened our resolve.”

The pandemic dealt another blow to the community’s prosperity, he said.

“Like the rest of the world, we were forced to readjust our course,” Mr. Fahie said.

Also on Sunday, Governor Gus Jaspert commended the people of the Virgin Islands for their efforts to rebuild.

“Thank you to all the individuals, organisations and international partners who have helped BVI build back stronger,” he wrote.