Years ago, nurse Theresa Smith Blyden singlehandedly delivered babies for the entire West End community, including helping save the life of a mother of twins. And on Tuesday, she was …

END_OF_DOCUMENT_TOKEN_TO_BE_REPLACED 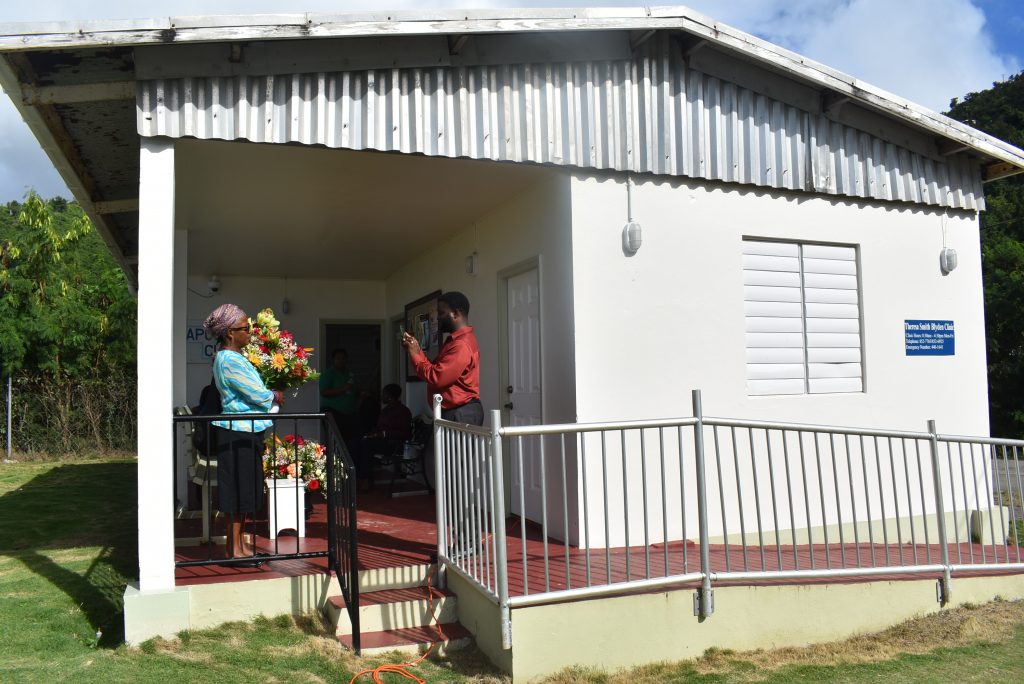 The reopened Cappoons Bay Clinic was renamed for nurse and midwife Theresa smith Blyden during a ceremony on Tuesday. (Photo: CLAIRE SHEFCHIK)

Years ago, nurse Theresa Smith Blyden singlehandedly delivered babies for the entire West End community, including helping save the life of a mother of twins.

And on Tuesday, she was honoured for her service as the Cappoons Bay Clinic — which reopened in July after sustaining damage during Hurricane Irma — was renamed for her.

“A big part of community health is going into the community to bond with members,” said Dr. Natasha Frett, head of primary health care services for the BVI Health Services Authority. “One of the important qualities of a commu- nity health provider is to know a community from the inside out. Theresa Smith Blyden was a noted champion of that, by going from home to home as a midwife and delivering infants.”

Other honourees
The ceremony also honoured two other nurses who made contributions to the community: Jennifer Bertie, who worked in emergency nursing at Peebles Hospital, and the late Trinita Donovan, also a Carrot Bay midwife.
Ms. Bertie said Ms. Blyden inspired her and many others to enter the nursing profession.

When she was growing up in West End, she recalled, “You knew when someone had a baby, [because] you would see her dressed in her uniform going up Zion Hill. … We knew what was happening in the community. This lady was very, very special. In her simple, calm way, she did her work.”

Opposition Leader Andrew Fahie (R-D1) said he worked with the Ministry of Health and Social Development to choose Ms. Blyden as the honouree in what he called a transparent process that honoured the voice of the people.
He added that Ms. Blyden was one of the local health professionals who could be called any time, day or night, to treat any malady.

“If you show people that you care, that’s 50 percent of the healing,” he said.

The clinic officially resumed services July 23, after the ministry replaced nearly all of its equipment and furniture.

Petrona Davies, permanent secretary in the ministry, said that although there wasn’t much exterior damage to the facility, electrical works were destroyed by storm surge.

“It took additional investment to get it up and running,” she said. The water-damaged cabinets also had to be stripped and replaced.

“There was a lot of internal work that needed to be done,” she said.
In the meantime, residents received health care from Peebles Hospital or from mobile clinics.

“We knew that because it served a wide area, and the whole northwestern area of the island was so badly impacted … it was high priority for us,” Ms. Davies said.

Although Mr. Fahie acknowledged that not having a clinic was difficult for the community, he credited the ministry for working through challenging circumstances to reopen it. Now, he’s looking ahead.

“Of course, Irma came and nothing was functioning, so I’m glad that the clinic is reopened,” he said.“But I’m still championing the cause that I was always championing: to have it remodelled into a modern structure.”

He added that plans for an expansion were drawn years ago, but that it’s up to the ministry to put them into action.

Ms. Davies said those plans are still in the works.

“Our long-term plan is to build a bigger clinic to serve this community better into the future,” she said.

Ms. Blyden was born in Apple Bay in 1911 and practised midwifery in the area in the 1940s to the 1960s, delivering hundreds of babies in that time.
Her niece, Brenda Smith, recalled a time when her advice likely saved a life. When a first-time mother gave birth to a girl, Ms. Blyden insisted there was another baby coming and that the mother needed to get to the hospital.
The mother disagreed, “saying, ‘no woman gets twins on her first delivery,’” according to Ms. Smith.

But the midwife insisted they walk the mother over Zion Hill and put her on a boat to the hospital. Sure enough, she soon delivered a second girl.

“Thank God they followed Auntie Theresa’s instructions,” said Ms. Smith, who called her aunt “a Florence Nightingale in her way” who carefully tended to every aspect of the birth process.

“Yes, she was responsible for that naval string,” she said. “Even the mother could not touch it. She was one serious midwife.”

New minister
Former Health and Social Development Minister Ronnie Skelton, who the premier fired this week, originally was scheduled to speak, but he was not present.

His replacement, former junior minister Marlon Penn, attended but did not speak.

Premier Dr. Orlando Smith said he caught on immediately to Ms. Blyden’s importance when he asked the community who the clinic should honour.

“You get a sense of what is important to the people in the villages and that tells you what names should be put there,” said the premier, who is himself a physician. “Her roots dig deep in this community.”

Ms. Smith, her niece, said renaming the clinic was just one way to honour her aunt.

The best way, she added, “is to continue her legacy of helping other people.”