Premier Andrew Fahie on Monday announced the official protocols for tourists to enter the Virgin Islands, which include four rounds of testing for Covid-19, four days of quarantine within approved …

END_OF_DOCUMENT_TOKEN_TO_BE_REPLACED 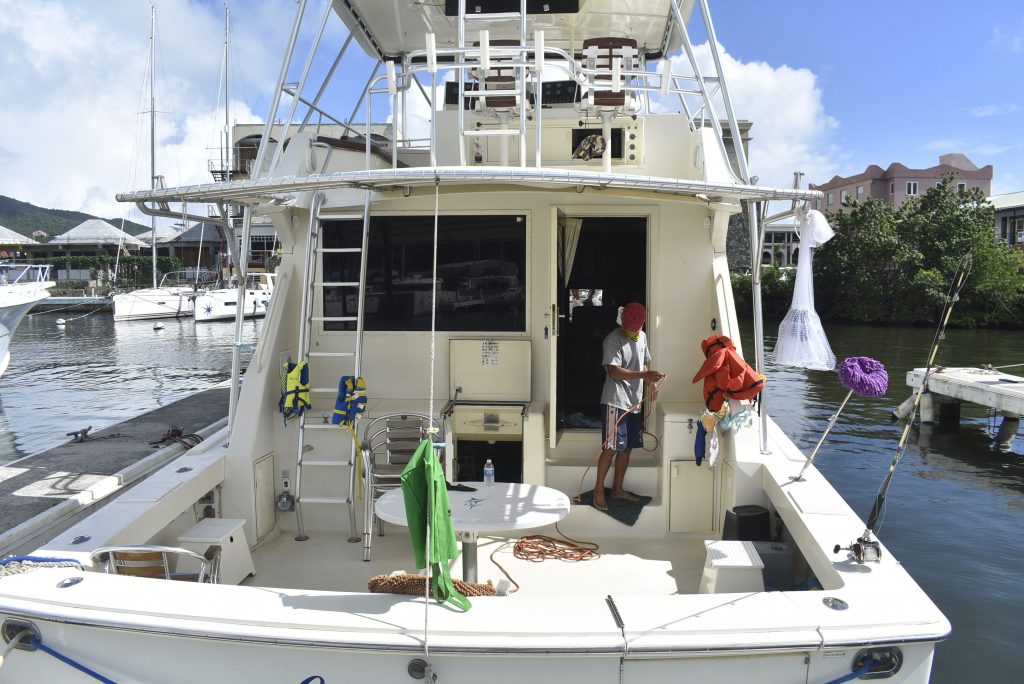 A man cleans a boat in Village Cay on Wednesday afternoon. After Premier Andrew Fahie announced the reopening protocols on Monday, many in the yachting sector said they felt left out of the government’s deliberations on how to restart the economy. Mr. Fahie, however, has promised more meeting with the marine industry. (Photo: JOEY WALDINGER)

Premier Andrew Fahie on Monday announced the official protocols for tourists to enter the Virgin Islands, which include four rounds of testing for Covid-19, four days of quarantine within approved accommodations, a further four days of limited movement within the territory, and GPS tracking through a phone app and possibly a bracelet to facilitate contact tracing.

Mr. Fahie explained that the system is designed to prioritise the safety of visitors and residents, but after the announcement hundreds of tourists quickly cancelled bookings, and many business leaders condemned the protocols as cost-prohibitive, unexpectedly restrictive, and damaging to the territory’s already struggling economy.

Critics of the reopening plan also condemned government for being late to provide key information, and they called on leaders to publish the protocols straightaway, provide a comprehensive economic recovery plan, and address many unanswered questions — particularly for the yachting sector.

Mr. Fahie went live to announce the entry process Monday evening, 35 days before the scheduled Dec. 1 reopening. Further details, he said, will be published online on Monday at www.bvigateway.bviaacloud.com.

While checking in to board a flight to the territory, visitors must first present a negative test for the virus antigen, called a PCR test, taken at least five days prior to travel. They must also give their “BVI Gateway Traveller Authorisation Certificate” to relevant authorities.

Upon landing at Terrance B. Lettsome International Airport — the only permitted point of entry on Dec. 1 — tourists will be screened for symptoms and administered another PCR test before being taken to their approved accommodations.

At their own expense, visitors also will be required to obtain medical travel insurance inclusive of Covid-19 coverage; quarantine at approved accommodations; take PCR tests on the first, fourth and eighth days of their stay; get a subscription to a contact tracing system set to go live early next month; and “in some cases” wear a GPS tracking bracelet, Mr. Fahie said.

A maximum 90 passengers on flights spaced at least 90 minutes apart will be permitted, according to the premier.

“This time lapse will also allow the team to sanitise the facility and to prepare for the next flight,” he said on Monday.

Mr. Fahie elaborated on the costs to tourists during a press conference Tuesday night with Health and Social Development Minister Carvin Malone.

The premier said the current price per test is $135, though he hoped that cost would be reduced to $100 with the help of undisclosed donors. The GPS tracker costs an additional $150.

The developer, Amber Group Limited, is a global technology company based in Jamaica that operates in 23 countries, according to the premier. Mr. Fahie said experts would provide more details about the system at a future press conference.

In spite of the costs, he said the system should represent an overall cost reduction, as it reduces the need for security officers to be stationed at quarantine locations — which Mr. Fahie said costs about $200 per night.

Travellers will be confined to their certified hotel for the first four days of their stay, though Mr. Fahie said they likely would be able to move freely inside the facility. He also announced the steps businesses will have to take to obtain a “gold seal” certification, allowing them to accommodate guests.

After obtaining a negative test result, Mr. Fahie said tourists would be permitted to move within the territory but must avoid crowded spaces. He explained that more details of those restrictions would be offered at a later date based on recommendations from Environmental Health Division and other government agencies.

After receiving a negative PCR test result administered on the eighth day, visitors will be allowed unlimited movement within the territory, according to the premier.

“At all times, the traveller would be required to have their mobile device with them, with the tracing software active,” Mr. Fahie said. “This is for their own protection, as well as the safety of others.”

He added that the system will also be able to notify authorities if a person ventures outside the permitted area.

Mr. Malone said on Tuesday that because the Dr. Orlando Smith Hospital on Tortola has a lab capable of certifying the test results, officials should be able to turn the tests around within 24 hours. Though government considered the use of “rapid tests” that can be processed in minutes, it had reservations about the accuracy of such tests, he explained. Rather, it would be looking to increase the lab’s capacity to process more PCR tests and secure more kits, he said.

To date, the territory has administered 5,919 tests, confirming a total of 72 cases. The VI currently has zero known active cases, and it has recorded one death related to Covid-19.

The premier said the scaled reopening, starting with just the one point of entry at the airport, will allow government to assess the protocols and adjust them as needed.

“We cannot afford when we reopen to have an outbreak and then be forced, as many other countries have been, to roll back or shut down,” Mr. Fahie said. “This will do more damage to the same economy, the same tourism industry, and the same people we have been working so hard to safeguard all these months.”

Mr. Malone said government is aware of the financial and mental health burdens many people are experiencing due to the hits the tourism industry has taken, but it is critical to reopen as safely as possible.

Mr. Fahie added that government will hold additional meetings with marine stakeholders to work out the details of the planned Dec. 8 opening of the seaports, particularly to answer questions about movement within the territory, and if tourists will be allowed to quarantine on yachts or solely on land. But he said the entry process will be similar to that at the airport.

“We have absolutely no intention of stopping persons from making business, but we have to find that balance,” he added.

Shortly after the Monday announcement, several business owners said they saw a slew of cancellations, with travellers baulking at the costs of meeting all the requirements and not wanting to spend the majority of what would be a one- or two-week vacation under restricted movement.

Many of those tourists, they said, had booked because the government’s Sept. 21 announcement of the Dec. 1 reopening appeared to promise a much simpler entry process.

Greg Aberle of Dolphin Water Taxi, which provided transportation between and among the VI and United States VI, said guest cancellations exceeded 450 for bookings between Dec. 18 and Jan. 3, and he expected this number to rise by another several hundred before the end of the week.

Mr. Aberle told the Beacon that many would-be visitors were angry to learn about the strict restrictions after waiting for the VI’s reopening (one of the last to occur among the Caribbean countries) and feeling misled by the Sept. 21 announcement.

He also noted customers’ frustration that although there are now restrictions in place that would make them want to cancel their plane tickets, the VI is technically open and some people would not be able to get refunds.

Mr. Aberle said considering current sentiments, he doubted visitors would earnestly pursue rebooking until as late as June next year, six weeks after the end of the high season. 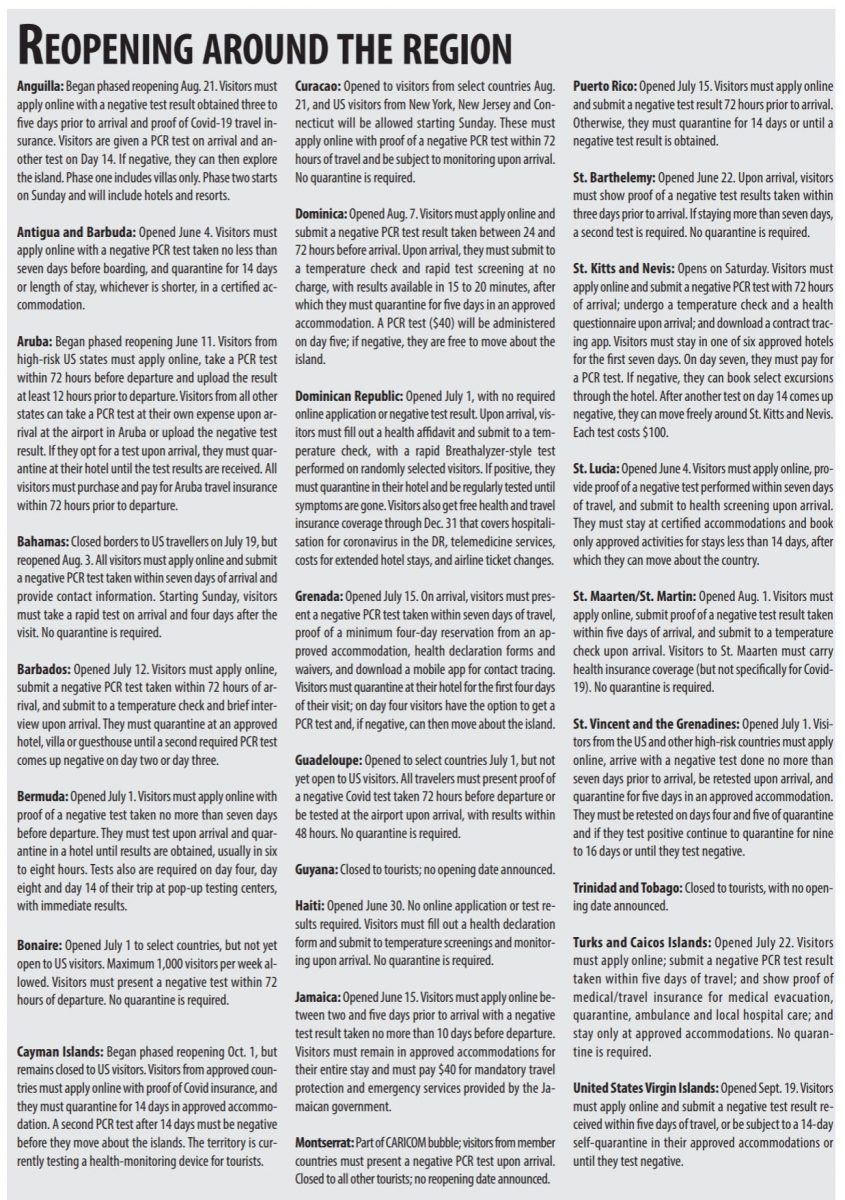 The premier pushed back on Tuesday about the cancellation complaints, saying visitors and businesses should have considered waiting for the protocols to be finalised before making the bookings.

“I am concerned about booking before you know the protocols, because then you would have been booking in anticipation that the protocols would be according to how you might be seeing them,” Mr. Fahie said.

However, he did say government was listening to feedback on the protocols and would consider making modifications to the testing requirements, but only after consulting with medical experts.

The same evening as the press conference, the BVI Chamber of Commerce and Hotel Association released a statement strongly criticising the protocols.

“The current economic condition is grim, and the anxiety and concerns of the majority of stakeholders in the Virgin Islands economy are well-founded,” the statement warned.

The chamber said the VI’s economy is in a “freefall” based on reports from some small businesses that they’ve lost up to 60 percent of revenue during the past six months, which they attributed to the late reopening to tourism relative to other areas in the Caribbean.

“It is important to note that the economy is intra-dependent, and if a sector is in distress there is a significant impact across all,” according to the statement published by BVICCHA Executive Director Keiyia Jackson-George. “The local economy is also interdependent to the global economy and cannot survive without the injection of international dollars through the tourism sector.”

The chamber noted that while revenue has remained low, businesses have had to invest extra dollars in personal protective equipment and other sanitisation measures.

“Many businesses, particularly in the tourism sector, are running on fumes and have exhausted retained earnings as well as personal savings trying to endure,” the statement notes.

Ms. Jackson-George added that businessowners would find it helpful for the Cabinet-approved policy to be made public so they could understand the details and offer better input for modifications. The BVICCHA also urged government to present an economic analysis of the pandemic on the territory’s economy this year to inform decision-making.

Ms. Jackson-George said hotels have resorted to pushing reservations to February 2021 with the hope of salvaging part of the upcoming tourist season. But the marine sector has been hard hit as well, with even fewer details offered about the possibility of a substantive reopening. Given Monday’s announcement, she said a “considerable” number of yachts will be looking to leave the territory.

“The industry reports that the effects of decisions made now will have ramifications long after Covid has passed,” according to the statement.

The premier promised during Tuesday’s press conference to work more closely with ocean-faring stakeholders to develop a plan moving forward.