Local News > Repairs to come to The Baths National Park

Repairs to come to The Baths National Park

The Baths National Park in the Virgin Gorda will be repaired within six and a half weeks with updates to the restrooms, an additional shaded area in front of Poor …

END_OF_DOCUMENT_TOKEN_TO_BE_REPLACED 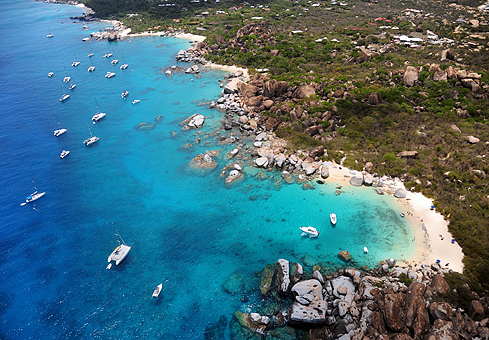 Parts of The Baths National Park in Virgin Gorda that were damaged during Hurricane Irma are to be rebuilt and renovated after a contract signing on Monday. Photo: TODD VANSICKLE

The Baths National Park in the Virgin Gorda will be repaired within six and a half weeks with updates to the restrooms, an additional shaded area in front of Poor Man’s Bar, and repairs to two Devils Bay rest stops, officials said this week.

On Monday morning, the Recovery Development Agency awarded Maynard Construction a $150,068 contract for the project, which is scheduled to begin immediately.

“We are extremely pleased to see this coming to pass finally,” said Lynda Varlack, acting director of the National Parks Trust. “When our staff was over there calling for help [after the hurricane], there were persons in the community who responded.”

Scott Maynard of Maynard Construction was present to sign the contract alongside his former teacher, Natural Resources, Labour and Immigration Minister Vincent Wheatley. Maynard Construction is a Virgin Gorda-based, family-owned company that has been in business for 33 years and has 19 employees.

“It makes me feel very good to have a young man involved in something like this,” said Junior Minister for Tourism Shereen Flax-Charles. “You are a shining example of what we want to see young people doing in the Virgin islands. This is a great day for the young people in the BVI for me.”

As the national park is being repaired during the tourism slow season, the NPT is also looking to re-open the Copper Mine. The structure itself survived the hurricanes of 2017, but the visitor centre was damaged. Located on the southeastern tip of the island, the 19th Century copper mine holds significant historical and cultural value, according to the NPT.

“The dispersement of visitors is essential. While The Baths are the premier tourist attraction, we do have a challenge with overcrowding. Opening up the Copper Mine is something I would like to see,” Ms. Flax-Charles said.

Hailed as one of the top attractions in the territory by Mr. Wheatley, The Baths currently charge visitors a $3 entrance fee, which is projected to rise in the future.

“I’m sure most everyone would realise that $3 is really minimal and cannot sustain the maintenance of the facilities,” Ms. Flax-Charles said.

She said it is no surprise that The Baths are called the breadbasket of Virgin Gorda since many businesses advertise the destination to their clients in their vacation packages. Though some of these businesses have expressed concerns about raising the admission price, Ms. Varlack said the NPT has a different view.

“We know the value of it. Those persons are going to have happier clients down the line,” she said, adding that attempts to come to a consensus have been unsuccessful. “It doesn’t make sense to pursue that line of discussion anymore. We just need to do it and let them see the benefits.”

Ms. Varlack is optimistic about the future of The Baths and other national parks, claiming that “the sky is the limit.”