Cabinet recently decided to spend $1,020,000 for the Virgin Islands Shipping Registry to launch a search-and-rescue centre that will use a boat named Vigilant II to help keep the territory’s …

END_OF_DOCUMENT_TOKEN_TO_BE_REPLACED 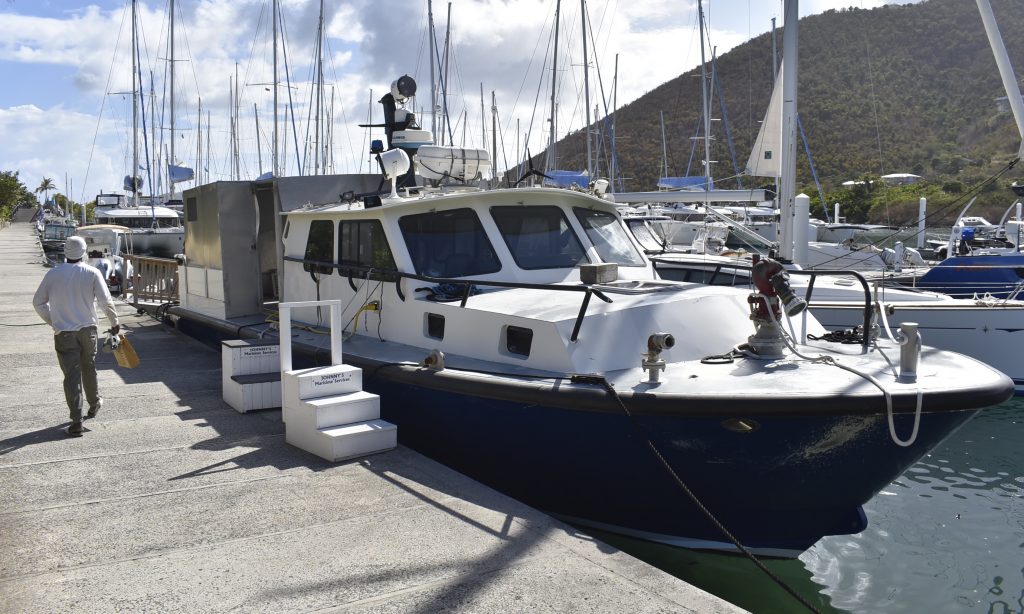 In January, Cabinet approved the allotment of more than $1 million to create a search-and-rescue centre in the Virgin Islands Shipping Registry, which is slated to use the vessel Vigilant II. But the boat has a long history of problems, once catching fire shortly after being delivered to the territory in 2004. Last month, it appeared to be undergoing repairs at Nanny Cay (above). (Photo: JOEY WALDINGER)

Cabinet recently decided to spend $1,020,000 for the Virgin Islands Shipping Registry to launch a search-and-rescue centre that will use a boat named Vigilant II to help keep the territory’s waters safe.

But that vessel, which has already cost taxpayers more than $1.2 million, has been plagued by problems since shortly after it was purchased in 2004, and it apparently has been out of commission for about a decade.

A summary of a Jan. 27 Cabinet meeting explained that under the registry’s planned Rescue Coordination Centre, crewmembers aboard the Vigilant II will lead search-and-rescue missions, respond to marine fires, and patrol the territory’s waters, among other responsibilities, many of which appear to overlap with services already provided by the non-profit organisation VI Search and Rescue.

To finance the effort, Cabinet approved a $595,000 increase to the Shipping Registry’s recurrent budget each year and decided to increase the Premier’s Office’s 2021 capital vote by $425,000 to “cover the establishment and outfitting works” for the centre, according to the Cabinet summary. Last month, Premier Andrew Fahie told the House of Assembly that the centre is essential to ensuring compliance with international maritime standards that the territory is currently not meeting.

“The rescue coordination centre will rectify this issue … [and] improve the safety standards of VI waters to the internationally required standards,” Mr. Fahie said on March 10.

The Vigilant II, however, does not seem ready for action.

On March 26, it was docked at Nanny Cay, where it appeared to be undergoing further repairs: No one was aboard, but there was a large scratch on the bow, and various materials, including hoses and a steering wheel, were scattered about the stern.

Acquired by government in December 2004 for nearly $1 million and put under possession of the Shipping Registry, the 51-foot boat originally served as a catch-all first responder for medical emergencies, search-and-rescue operations, patrol missions and fires, Dave Smith, who was the VISR director when the boat was acquired, told the Beacon in 2016.

The vessel also was used to perform maintenance on buoys and to do soundings for marine hurricane shelters, and it stood by in a safety capacity for seaplane landings and boat races, Mr. Smith said at the time.

The Vigilant II was crewed by VISR employees but utilised on an as-needed basis by the VI Fire and Rescue Service, police, customs, and the Department of Conservation and Fisheries.

“It proved to be a real positive asset for the government,” Mr. Smith, who is now the BVI Ports Authority security manager, said at the time.

But the boat also struggled with several issues from the start.

Its propeller was damaged during the 2004 delivery and needed replacement, which turned out to be the first of many problems over the next decade.

Four months later, it caught fire during a test run in Road Harbour.

The blaze was eventually extinguished, but not before it caused “considerable damage,” according to a first responder at the time.

Despite these setbacks, the boat remained largely operational until about 2010, Mr. Smith said in 2016.

In 2012, the Ministry of Health and Social Development took possession of the vessel from the VISR with the intention of converting it to a sea ambulance that would serve Virgin Gorda residents in need of transport.

The ministry undertook repairs that included an engine rebuild, replacement of drive-shaft seals, engine alignment, replacement of cutlass bearings, replacement of zincs and repairs, and painting of the hull, HSD permanent secretary Petrona Davies told the Beacon in 2015.

A 2013 Standing Finance Committee report noted that more than $147,000 was earmarked for the vessel’s operation that year, enough to employ three local captains on an on-call allowance. But Ms. Davies said the money was never budgeted.

According to a transcript of the SFC deliberations from the same year, Ms. Davies said the boat would be operational within two weeks.

“The vessel required more extensive repairs than we realised when it was first handed over to us, and the repair works took a lot longer than we anticipated,” Mr. Skelton said in March 2015. “The boat is now seaworthy, and we’re making final arrangements to hire a captain and crew to operate in partnership with the [VI Fire and Rescue Service] on Virgin Gorda.”

In the 2015 budget, one of the fire service’s key programme strategies was to submit a proposal to the then-Ministry of Communications and Works for three fire officers to become certified captains by December 2016.

“They would be able to not only operate the boat, but then they would be in a position to lend assistance to the patient in the event that assistance is needed,” Mr. McLean said of the proposal. “But that never manifested past a casual conversation, and I have not heard much of it after that.” Currently, no fire officers are certified captains, he said.

Mr. McLean added that he was not aware of the Shipping Registry’s plans to create a new search-and-rescue organisation, nor was he aware of whether the boat is currently in the possession of the HSD Ministry or the registry.

He added that the Vigilant II originally was “earmarked” as a vessel that could be utilised by up to four different departments, including police and customs, and could provide firefighting, reconnaissance, rescue and transportation services.

He also welcomed the arrival of another organisation to perform search-and-rescue missions in the territory.

“Even though [VISAR] may get some assistance from the government, it is the government’s responsibility to place any manner of protection they can within the marine sector,” he said, adding, “To depend on a private organisation to do that would be irresponsible.”

VISAR President Gerard Kraakman said Tuesday that VISAR staff have met with Shipping Registry Director John Samuel, and the non-profit organisation’s mandate and responsibilities will not change once the RCC launches.

“Once the RCC proposal is approved, various systems and processes will be updated for a variety of departments and emergency services, including VISAR,” he added.

It is unclear when the Vigilant II might be up and running.

At its Jan. 27 meeting, Cabinet decided that the Premier’s Office should instruct the Attorney General’s Chambers “to review any existing agreements and arrangements relating to search and rescue in the VI that could impact” the decision to launch the new centre.

Mr. Samuel, however, did not respond to messages.