From toys to titans, dogs of many shapes and sizes bounded into the ring at the Humane Society of the BVI’s annual dog show on May 14 at Captain Mulligan’s. …

END_OF_DOCUMENT_TOKEN_TO_BE_REPLACED 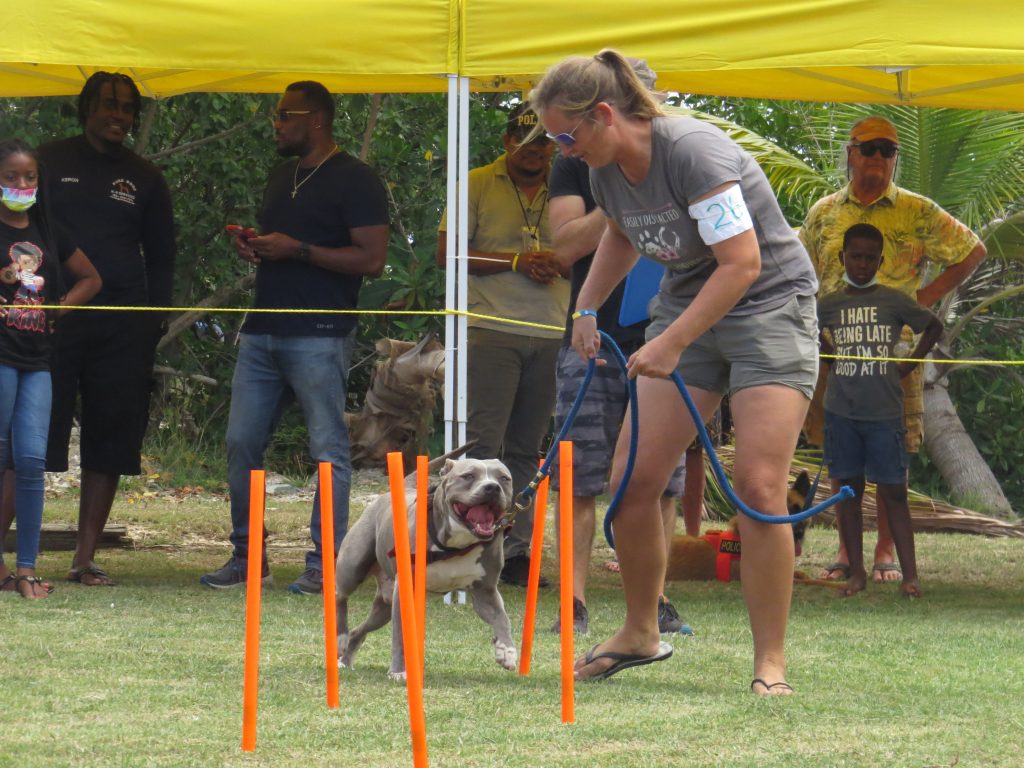 The Humane Society of the Virgin Islands raised $13,000 on May 14 at its annual dog show, which featured friendly competitions, raffles and demonstrations. (Photo: DANA KAMPA)

From toys to titans, dogs of many shapes and sizes bounded into the ring at the Humane Society of the BVI’s annual dog show on May 14 at Captain Mulligan’s.

The society said it raised $13,000 from the event to help with its animals’ vet bills, food costs and passage to new homes in North America. The organisation is also working toward breaking ground on a new shelter.

Some dogs donned costumes ranging from superhero outfits to a puffy teal tutu to compete in the “fanciest dress” category. Others focused on giving judges their best handshakes — with a possible bonus point for kisses.

Attendees had the chance to take in the wide variety of games, view a demonstration by the Royal Virgin Islands Police Force K9 Unit, and support the humane society.

Winning back the title

Claudia Delahoy and her dog Django won the accolade for the best performance on the agility course this year.

For that event, dogs faced the challenge of weaving through poles, over a fence, through two tunnels, and up a ramp to the stage, where they each could demonstrate a special skill. Some stood on two legs, others did a handshake, and some simply focused on looking cute for the crowd.

A few owners had to offer extra encouragement for their pets by crawling through tunnels themselves first, much to the delight of the children in the crowd.

Though Django has won the agility category in the past, he missed the title last year after he was hampered by a cone. Ms. Delahoy said it was rewarding to see him out again enjoying what he does best.

“He may be nearly 10 years old, but he’s getting stronger and looking fantastic,” she said.

The pair met after Django was found wandering the streets of Cane Garden Bay, gradually losing weight until a keen-eyed friend of Ms. Delahoy intervened.

Ms. Delahoy said his sweet disposition won her over, and the two have been inseparable ever since. Though adopting a dog is a serious commitment, she would tell anyone that it can be a life-changing experience

“He puts a smile on my face every day, which is the best thing in the world,” she said.

Django wasn’t the only winner who was a rescue.

In the “small island mix” category, Pippin and owner Rebecca Clark took first. Judges said they were looking for competitors to not only show off their looks, but also demonstrate a close connection between dog and handler.

Ms. Clark said she found now-5-year-old Pippin hiding under a car after a rainstorm, when she was covered in fleas and no bigger than her hand.

“She’s very bonded to me, and I’m very lucky with her,” she said.

Four-year-old Fred, who took “big island mix,” is also a rescue. Owner Zach Pascoe said Fred was found on Beef Island, and when the humane society posted his picture on Facebook, it was an instant match.

“Rescues make the best dogs, because they just know you saved them, and they become a companion for life,” he said.

Winning “best in show” was particularly surprising for Chelsi Flax-Solomon and her dog Chloe considering they hadn’t planned on entering at all. But she said someone stopped the pair on the sidelines and encouraged them to enter.

With her curly black coat shining in the sun, the young springer spaniel won her category of “best small pedigree” and later won the grand title.

Ms. Flax-Solomon said her mother brought Chloe home a year and a half ago for her birthday, and she has been a great companion ever since.

Besides being a fun competition, the dog show provided an excellent opportunity for Chloe to socialise with other dogs and for them both to meet other animal lovers in the territory, she said. Ms. Flax-Solomon congratulated her peers and said she hopes everyone returns for an even bigger show next year.