Applicants seeking to regularise their status in the Virgin Islands through the government’s new “fast-track programme” — whether via permanent-resident status, belongership or both — will have less time to …

END_OF_DOCUMENT_TOKEN_TO_BE_REPLACED 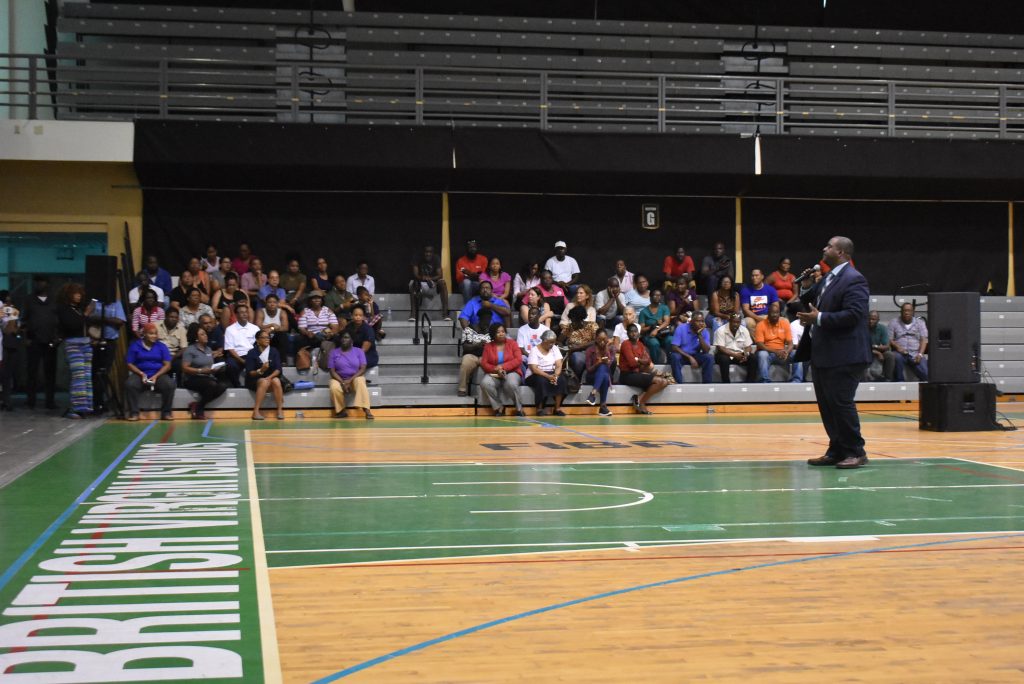 Applicants seeking to regularise their status in the Virgin Islands through the government’s new “fast-track programme” — whether via permanent-resident status, belongership or both — will have less time to submit their applications than originally announced, officials said during an informational meeting held on Monday.

Instead of Monday, May 13, applications will now be accepted starting Monday, May 27, giving applicants five days to submit. After that, the doors will close, at least for the time being.

“After that the regular process will go back into place,” said Marsha-Ann Gumbs, private secretary to Premier Andrew Fahie, though the premier explained in his remarks that new legislation may result in new permanent policies.

Mr. Fahie said last week that he expects the 15-year-residency requirement for permanent-resident status, eased from the previous 20-year requirement, to stay in place.

Ms. Gumbs spent more than an hour answering questions from around 300 potential applicants who braved the malfunctioning air conditioner at the Multi-purpose Sports Complex to find out how those who have lived in the VI for 15 years and have “contributed to the community,” as Mr. Fahie put it, could become residents and belongers under the new plan.

The programme announced last week is designed to help address the large backlog of applications and process new ones. Applicants will still have to present the same documents required previously, which include reference letters, a birth certificate, police records, a bank statement, and others.

But those who have already submitted applications, paid their fees, and are still waiting — several years, in some cases — will not need to resubmit their documents.

The fees to apply have increased significantly. Those who already have permanent residency will pay $810 to start the process to become a belonger, while those seeking both residency and belonger status will pay $1,500 when they submit their application.

The official opening date is Monday, May 27, but officials said the applications could be accepted as early as next Wednesday. At least 13 additional immigration staff will be hired to accept the required paperwork in the Multi- purpose Sports Complex from 8:30 a.m. to 4:30 pm on those dates. Additional informational meetings were held this week on each of the sister islands.
Opening the complex on Saturday to accept applications is also possibility, added Chief Immigration Officer Ian Penn.

For those who may be short of the required 15-year residency period, Ms. Gumbs said they would have to wait to apply after the normal process goes back into effect after May 31, but that all applications would get responses.

“Don’t feel you are left out entirely after this time,” she said. “All applications will be considered [eventually].”

In response to another question, she added that for the first time, residency and belongership will be given simultaneously, in a departure from the previous policy that required a 12-month wait between the two, calling the two-for-one programme an “extreme special grace” that will exist only as long as the “fast-track” programme is in place.

Ms. Gumbs urged anyone who needs further clarification to call 368-9100 and visit the Premier’s Special Projects Facebook page, where officials promised that all questions would be answered.

Not ‘out of the blue’

In his remarks, Mr. Fahie addressed criticisms that had arisen since his original announcement, denying claims that he never mentioned the residency plan on the campaign trail.

“This wasn’t something that I just sprung out of the blue,” he said. “All the checks and balances that are done through the regular process [are] being done.”

In fact, in a February interview with the Beacon, Mr. Fahie said he
disagreed with the incumbent National Democratic Party government setting the requirement for permanent residency at 20 years.

“They’re campaigning, telling the people of the Caribbean that they love them, but they have not shown the love,”he said.“To have someone in your country 20 years or more, you can’t tell them to leave.”

He announced government’s intention on Friday to quickly push “a few amendments” to the Immigration and Passport Act through the House of Assembly. He did not say what the changes would entail, though last week he said that they may involve new policies for residency going forward. The bill had not appeared in the Gazette as of press time.

“Normally when you introduce a new piece of legislation it does the first reading alone, but because of this initiative … we are going to attempt to do the first, second and third reading,” the premier explained.

Already, eager residents pushed through the doors of the Road Town Police Station early Friday morning in hopes of applying for the required police reports, which normally take two weeks to process. On Monday, officials said the police had cut the wait time down to three days.

On Monday, Police Commissioner Michael Matthews pleaded with the public to bear with them.

“We are seeing a significant increase in the number of police checks required, which is understandable, and we have put on additional staff to process the applications,” he said. “Indeed in one day alone we processed over 100 police checks in support of applications.”

On Friday at around 10:30 a.m., a senior who declined to be identified emerged from the station with his police report, saying he’d been allowed to the front of the line because of his age.

“Of course I wish I weren’t as old as I am, but if I were younger I’d probably still be in there,” he said.

He added that he arrived at 8:30 a.m., when the station opened, and found applicants already waiting.

“They’re bringing in five or six back at a time, but they only have one person working in there processing the reports,” he said, adding that he thought the police hadn’t been fully prepared for the influx. “If they continue at that pace, it’s going to take a very long time.”

On Friday, the race had already begun at the Immigration Department to pick up and fill out the required forms.

Nia Joseph, a Grenada native who has lived in the territory for 20 years, said she was surprised to be told that the opening date had been changed to May 27, but she didn’t mind because it gave her more time to assemble the proper documents.

“I already have all the documents for residency, but you have to turn in your residency and belongership all at once,” she said. “Now I just need passport photos and one other reference letter.”

She does expect to have to fight crowds when the immigration office opens on May 27, although she noted that those who already have residency are being allowed to submit belongership applications early and pay later, which may cut down on wait times. This was confirmed by Ms. Gumbs on Monday.

“You have a whole week, so we just need to do this in an orderly fashion,” said Mr. Penn, also speaking on Monday.

Shawn Persaud, a native of Guyana, just came to the department to pick up an application form, saying he hadn’t yet assembled any of his documents and hadn’t had time to look at them to see what was required. He would be the first person he knew among his friends and family to get a chance at residency, he said, adding, “I’m just happy to have the chance to apply.”