Local News > ‘We’ve got to do better than this:’ Residents speak out about trash fires

‘We’ve got to do better than this:’ Residents speak out about trash fires

More than 40 residents showed up to a community meeting hosted by government on Tuesday night to voice their worry and anger about a string of recent dumpsite fires. The …

END_OF_DOCUMENT_TOKEN_TO_BE_REPLACED 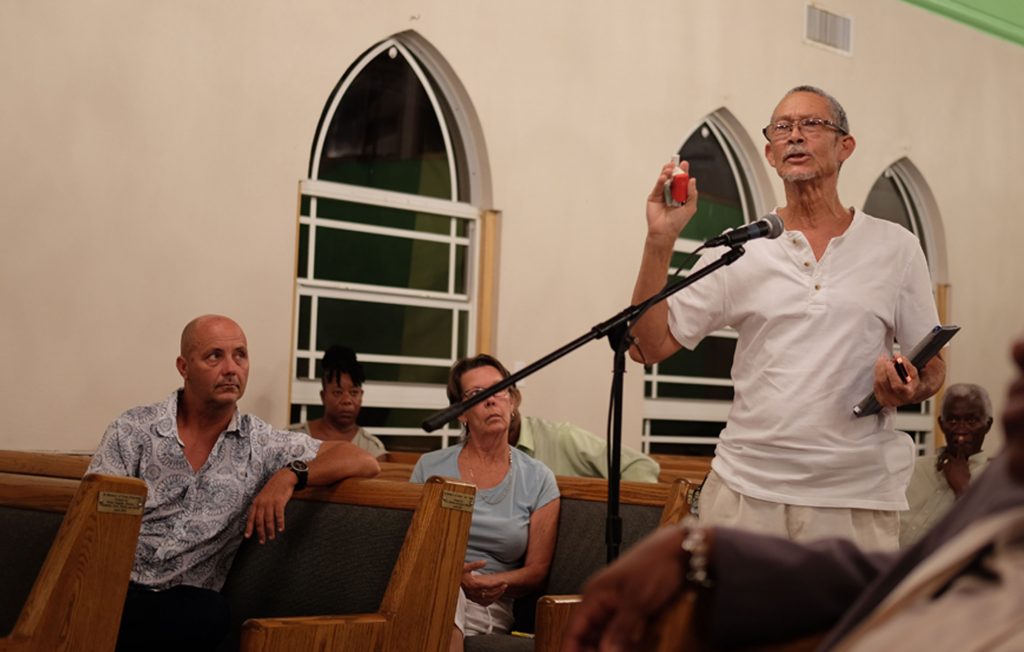 More than 40 residents showed up to a community meeting hosted by government on Tuesday night to voice their worry and anger about a string of recent dumpsite fires.

The dumpsite at Pockwood Pond went up in flames two weeks ago, sending thick, toxic smoke into the neighbourhoods and homes of West End. And the Coxheath dumpsite, only a short distance from where the Tuesday meeting was held at Zion Hill Methodist Church, has continued to smolder for four months since it originally caught fire in May.

“I walk with two different types of inhalers,” one man said, holding up one of the inhalers. “I don’t have the luxury of moving elsewhere. … My health is my greatest asset and I’m losing it.”

The recent garbage fires at government-managed dumpsites aren’t a rare occurrence. There have been at least five around the territory since Hurricane Irma.

“It begs the question: Are we really concerned about our human capital? Or is it just pen and paper and then whatever happens?” a woman asked this week. “At some point we need to actually get personal. This is a personal issue.”

“We’ve got to do better than this,” a second woman said. “These are people’s lives you’re dealing with.”

Mr. Massicote started with an apology.

“On behalf of the Department of Waste Management, we’d like to express our most sincere apologies for all of the inconveniences that have been caused as a result of the fires,” he said.

Over the past year, the DWM has been inundated with several times the amount of garbage it normally receives. On Tortola alone, just over half a million cubic yards of debris and almost 100,000 tonnes of residential waste have been collected, Mr. Massicote said.

“To put that into perspective, in an ordinary year we would collect maybe about 40 to 45,000 tonnes of mixed garbage, and out of that about 30,000 tonnes would be residential waste,” he said.

“So our systems have been exhausted. The Department of Waste Management will continue to press forward to work with whatever we have to try to keep the system going.”

Many residents also asked specific questions about the fact that the Pockwood Pond incinerator still does not have a pollution-control scrubber after a decade of unfulfilled promises from government officials including Mr. Skelton.

Without a scrubber, exhaust from the incinerator likely contains elevated levels of chemicals including dioxins, a type of highly toxic pollutant that can cause reproductive and developmental problems.

Government signed a roughly $1 million contract with the Virginia-based company Consutech Systems LLC in 2015 to manufacture the device, and has already sent some $500,000 to Consutech in the form of a deposit and other payments.

Despite that hefty payment, on Tuesday officials still could not say exactly when the scrubber will be completed or brought to the territory.

“It’s taken a lot longer than any of us expected,” Ms. Davies admitted, citing issues that Consutech has had in the manufacturing process. “It’s frustrating and it’s embarrassing.”

Mr. Massicote also assured residents that the scrubber would be a priority, but he could not provide concrete information about its arrival date.

“The designs are completed. The process [of constructing it] started,” he said. “I can’t tell you whether it’s 50 percent, 75 percent, or 100 percent [finished]. But it’s time to revisit it again.”

At the end of the meeting, Opposition Leader Andrew Fahie, who had spoken briefly at the beginning of the event, suggested that a task force be formed, especially to follow progress on the scrubber.

“Your voices have resonated, and we understand and we’re happy that we’ve had this opportunity to hear from you first-hand that this is important to you on an individual level — for your children, for your relatives, for your neighbours and friends,” she said.