Some of the children at the Fifth District Resource Centre were yawning during its re-opening ceremony on Monday. “What’s wrong? Why are you so tired? What were you doing last …

END_OF_DOCUMENT_TOKEN_TO_BE_REPLACED 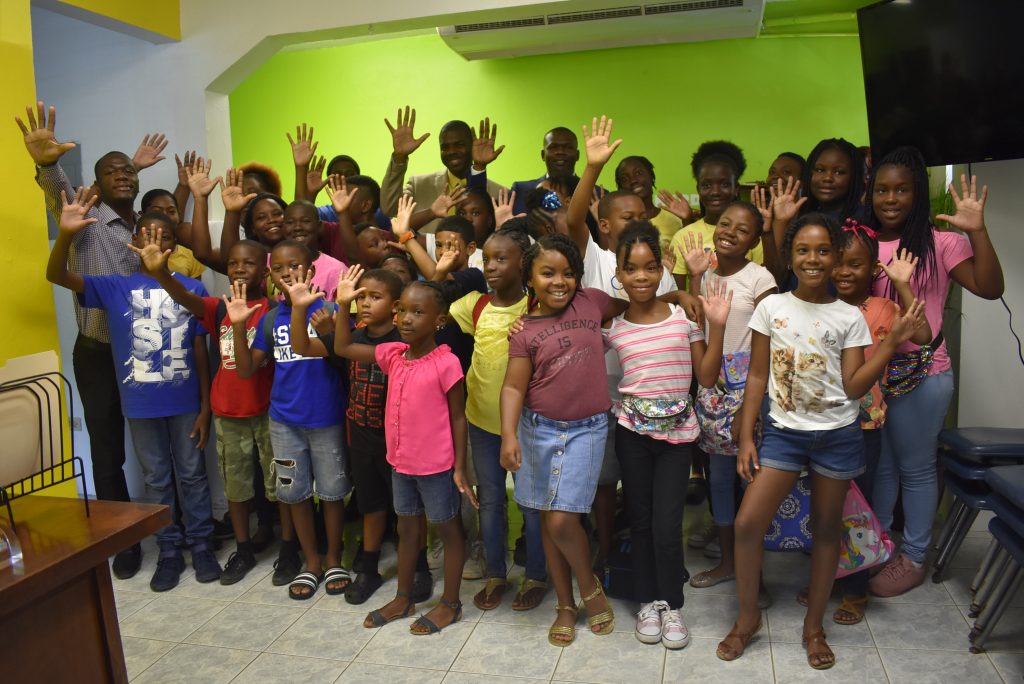 Students show their support for the Fifth District Resource Centre by holding up fives during the facility’s re-opening on Monday. (Photo: ZARRIN TASNIM AHMED)

Some of the children at the Fifth District Resource Centre were yawning during its re-opening ceremony on Monday.

“What’s wrong? Why are you so tired? What were you doing last night?” asked Transportation, Works and Utilities Minister Kye Rymer, who represents the district.

“I was playing a lot of video games and watching TV,” said one of the students.

Between graduation and the start of the new school year, children in the district now have a new space to learn and play at the Resource Centre, which re-opened its doors following damage caused by Hurricane Irma.

Located in upper Huntums Ghut, the centre has a room for older students that will hold computers; an adjacent room for younger children; a kitchen; two bathrooms; and a reception area.

“The government is renting this space through the ministry,” Mr. Rymer said. “We’re trying to build life into this facility. We intended to have 30 students, but we’ve exceeded it.”

The minister added that he was grateful for the opportunity to contribute to the cause, and said that he will use the space as his office and intends to hold district meetings there during the school year.

The centre, which spans the ground floor of a building owned by Carl Todman, was initially an apartment like the rest of the building.

But when the late Delores Christopher, who previously represented the Fifth District in the House of Assembly, approached Mr. Todman with the idea to start a resource centre for youths in the territory, he offered it.

“Since Mr. Rymer won the election, I told him about it and brought him here,” Mr. Todman said. “When the children had it [before Irma] they’d come after school and go down to the basketball court.”

After the hurricane, he added, residents were concerned about the centre and interested in re-opening it.

For $50 a month, children can stay there between 8 a.m. and 3:30 p.m. Monday through Friday, and they’re able to partake in activities like basketball while utilising learning resources throughout the summer.