Beneath a cloudless sky and bright sun on Monday, government ministers, energy professionals and non-profit leaders cut the ribbon on the territory’s first solar-powered “tree,” which they hope will be …

END_OF_DOCUMENT_TOKEN_TO_BE_REPLACED 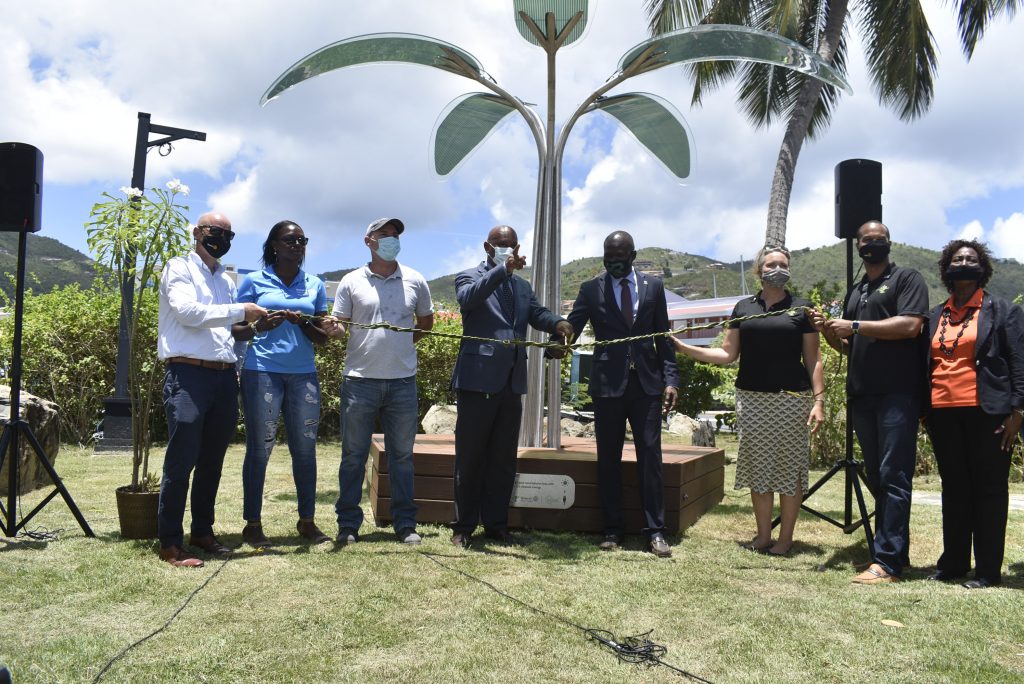 Government ministers and sponsors of the new solar “tree” before cutting the ribbon on the Virgin Islands’ newest solar project. (Photo: JOEY WALDINGER)

Beneath a cloudless sky and bright sun on Monday, government ministers, energy professionals and non-profit leaders cut the ribbon on the territory’s first solar-powered “tree,” which they hope will be one of many continuing innovations in the renewable energy sector.

“Today I feel very, very happy, because this is one more win for the environment, which has taken a significant beating since the hurricanes of 2017,” said Natural Resources, Labour and Immigration Minister Vincent Wheatley.

Currently stationed in the Noel Lloyd Positive Action Movement Park, the tree, a gift from Brazilian solar firm Sunew, will soon be dismantled and stored in a warehouse in preparation for hurricane season, said Green VI Deputy Director Sarah Penney.

In November, the tree will be returned to the park for a one-year period, though going forward officials hope to station it in a new location every year so that residents across the territory can see the advantages of clean energy technology, Ms. Penney said.

“This technology … is really where solar is going,” she said, adding, “What we’re really excited to see be demonstrated is that this has got a lot more storm resilience.”

Powered exclusively from the energy that the metallic limbs soak up from the sun, the tree has several USB ports and lights that will stay on even if the power grid cuts out, Ms. Penney said. She believes that the tree would be especially helpful in places like the territory’s ports, where people tend to spend a lot of time on their phone, she said.

Beyond providing an added convenience for residents, Ms. Penney hopes that the tree sparks some conversations about how to adapt to a world with a rapidly changing climate, she said. “How do we reduce the emissions that are causing climate change, but then how can we have technology that is also relevant and resilient?” Ms. Penney asked.

Although the tree was officially christened on Monday, its journey to the VI began long before then.

After Green VI was able to secure the donation from Sunew thanks to the help of David Norris, a British environmentalist with ties to the VI and to Sunew, the tree was shipped out from South America late last year and landed in the VI in January, Ms. Penney said.

To the surprise of Ms. Penney and others involved in the project, the tree arrived without its battery, which is considered a hazardous material and has to be shipped separately, she said.

“Of course the battery arrived, I think, two days before the nation got locked down from Covid,”she recalled.

Obtaining the battery from the port took time and effort, and when it was finally installed in the park in July, it was unclear whether the territory would soon be hit by the tropical storm that became Hurricane Isaias, Ms. Penney said.

With all the drama of obtaining the solar device behind her, Ms. Penney was not the only one thankful for all the help in installing it.

“Congratulations, and thanks, for the various roles that each and every one of you has played in bringing this project to fruition,” said Henry Creque, the owner of Creque’s Engineering Services and a Green VI board member.

GreenVI, the Rotary Club of Tortola, and aTec, a local solar firm, split the costs for shipping the tree, while various trucking companies helped transport it across the territory, Ms. Penney said, adding that aTec also donated storage space.