On Friday evening, H. Lavity Stoutt Community College President Dr. Richard Georges was appointed the Virgin Islands’ first poet laureate. But when accepting the three-year position during a ceremony at …

END_OF_DOCUMENT_TOKEN_TO_BE_REPLACED 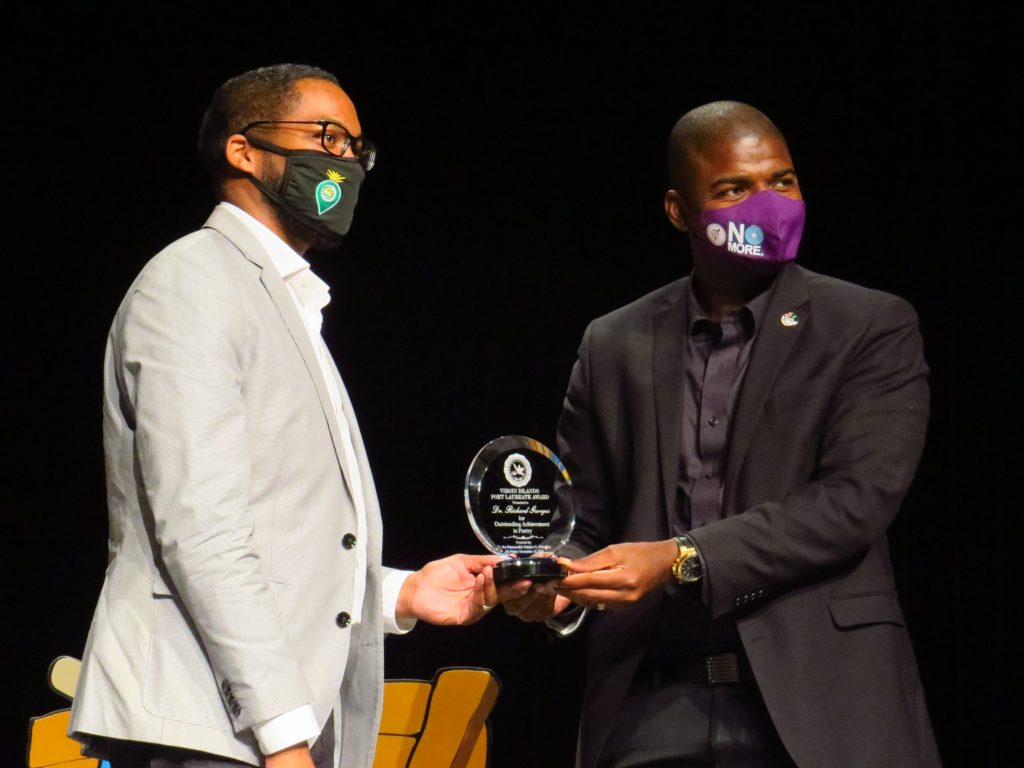 Dr. Richard Georges, left, accepts an award as the Virgin Islands’ first poet laureate from Deputy Premier Dr. Natalio “Sowande” Wheatley on Friday at H. Lavity Stoutt Community College. In the role, he will represent the territory for the next three years as a cultural ambassador. (Photo: DANA KAMPA)

But when accepting the three-year position during a ceremony at HLSCC, he was quick to say that he didn’t get there alone.

“There are many writers and poets over the past century for whom this honour may have been justly conferred, and I myself have much I wish to accomplish in the area of literature after tonight,” Dr. Georges said, adding, “My steps have been ordered and my hands have been guided by a chain of ancestors, teachers and mentors.”

He also outlined his goals to use the position to promote the talent of artists in the Caribbean and support the territory’s literary community.

Dr. Georges is an award-winning poet and essayist, a founding editor of the Moko journal, and a fellow of the Stellenbosch Institute of Advanced Study.

The ceremony also included a short film, “On Becoming a Poet,” during which he described how he reached this point in his career. He thanked his teachers and family, especially his maternal grandfather, for instilling an appreciation for books in him from childhood.

“He encouraged me to imagine different realities than the ones I was accustomed to” through a steady diet of abridged illustrated classics, comic books, and all manner of eclectic literature, Dr. Georges said.

In the video message, the poet also offered practical advice to budding writers, encouraging them to exercise discipline in practising their craft.

“Early on in experimentation, I think a lot of people tend to think you can write by inspiration, you know, when the feeling hits you,” he said. “But I think if you want to be serious about writing that you have to delegate the time and the energy and the resources required for you to become better at it. … You have to invest in yourself.”

He also disclosed that it took him five years to write his first book. But that work, he said, paid off.

Also during the ceremony, Dr. Georges read a selection of his works, from “Griot,” the first poem in his first collection, Make Us All Islands, to poems from his most recent book, Epiphaneia. He said he was glad for the opportunity to pay tribute to his ancestors through reading his poems at a historic event.

The new poet laureate smiled on stage as he accepted the distinction from Deputy Premier Dr. Natalio “Sowande” Wheatley, who is also the education, culture, youth affairs, fisheries and agriculture minister, to resounding applause.

The deputy premier commended Dr. Georges for having his work published by international presses and garnering worldwide acclaim.

Literary Arts Officer Anika Christopher from the Department of Culture, which initiated the effort to appoint a VI poet laureate, explained that in the position Dr. Georges will be an official ambassador for the territory for the next three years.

His responsibilities will include promoting appreciation for reading and writing poetry; presenting an annual lecture about his works; representing the VI at regional and international literary events; developing poetry-based projects and programmes; acting as a mentor to emerging poets; making suggestions to improve existing literary programmes; and closing out his term with a reading.

Ms. Christopher also explained that Dr. Georges was selected based on the subject matter of his creative works, which speaks to the unique experiences of the VI.

The department also considered the quantity and quality of his work, as evidenced through awards and other literary achievements, she added.

Dr. Georges won the OCM Bocas Prize for Caribbean Literature earlier this year for his collection Epiphaneia, making history as the first Virgin Islander to do so.

Ms. Christopher said designating a poet laureate was a way for the department to express its “love and appreciation for the art of poetry.”

“The establishment of the Virgin Islands poet laureate programme signifies a significant step in the maturation of this art form in Virgin Islands society,” she said.

Dr. Smith lauded the power of poetry in reflecting the voice of a community and in confronting hard truths.

“Poetry is a vehicle of learning and can transmit socio-cultural values, as well as foster a people’s collective memory,” she said.

Dr. Georges’ poetry does all that and more, Dr. Smith said, and she shared her excitement for how he will continue to convey the stories of VI residents through his appointment.

“When I first read the works and the poems of Dr. Richard Georges, I realised that he was able to put into words that which I could never hope to: the feeling of being connected to heritage, place and time as we go through modern society,” she said.