A legion of police officers carrying shields and dressed in black body armour advanced across a softball field towards an invisible crowd on Tuesday morning. If a march, protest or …

END_OF_DOCUMENT_TOKEN_TO_BE_REPLACED 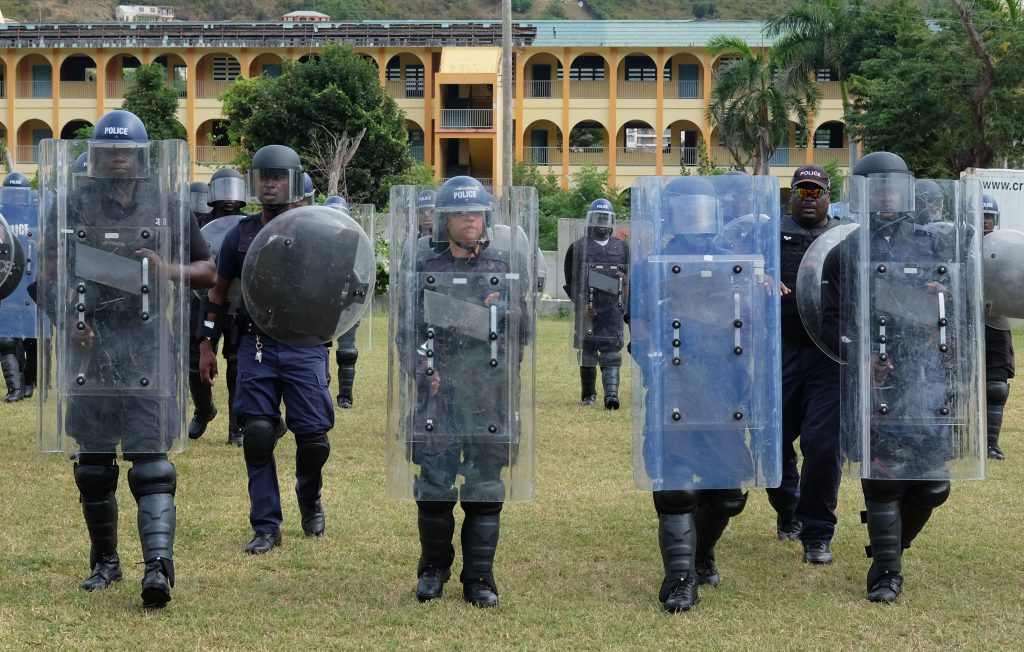 A legion of police officers carrying shields and dressed in black body armour advanced across a softball field towards an invisible crowd on Tuesday morning.

If a march, protest or riot forms in the territory, this group of officers will now be equipped to safely handle the situation.

“It seems to be working really well. They seem to be really, really switching on to this training,” said Rick Poulton, lead trainer from the London-based company Red Snapper Learning, which is conducting the exercises.

And while the Royal Virgin Islands Police Force doesn’t expect to be dealing with many riots, such tactics could be useful in the aftermath of another major storm like Hurricane Irma. During that time, police officers were tasked with taking on large groups of people who were breaking into stores and other businesses, Mr. Matthews said.

“Yes, most certainly this type of kit and this kind of training could contain a situation like that and allow us to be more effective in making arrests in the future,” he said.

Mr. Poulton, along with three other trainers from Red Snapper, led a group of more than 20 officers through various formations on Tuesday.

Last week, the unit was trained in “level three public order” techniques, which typically deal with minor disorder and the closing of certain roads and junctions, Mr. Poulton explained.

“[It’s] making sure that if we don’t want [a crowd] going down a certain area — maybe the police station, maybe the governor’s office — then we can make sure that we put our riot police officers down,” he said.

This week, the unit has moved up to level two training. At this stage, officers use equipment like shields, batons and protective equipment.

While some Virgin Islands officers have had riot training in the past, Mr. Matthews said, the current exercises are more about crowd control and maintaining public safety.

“The truth is this is standard training that every police force internationally would go through,” he said, adding, “It’s pretty unlikely that we’re ever going to be dealing with riots. I’d like to think that the good folks of the Virgin Islands are pretty well-behaved when it comes to that.”

Mr. Matthews did, however, point to events like the “Decision March” protest last May, when more than 1,000 people marched through Road Town and down Waterfront Drive.

“I felt I had a duty to the public as well as my officers to make sure that they’re trained properly for any event,” he said. “And that’s something as low-key as just walking alongside a large march, to something perhaps more hostile where people are misbehaving and then [officers] have to put on protective equipment as you see here today.”

Mr. Poulton also suggested that with the upcoming general election, officers could potentially use the level three training to move a politician in their car through a dense crowd.

“Fingers crossed, this stuff is never gonna be used,” Mr. Poulton said. “But it’s better to have it and not use it than if something happened.”

In the future, the police commissioner hopes that all officers in the force can be properly trained to use such tactics.

“That’s also about a local funding issue for police training, which I want to impress on any new government,” he said. “If I can get the adequate training that we need, then it won’t just be this group of officers. We’ll look to expand it across the force.”