Road Town cleanup gets 200-plus volunteers

Several bins full of trash removed from the streets were just the tangible benefits of the Road Town cleanup Saturday that included more than 200 volunteers working with Green VI, …

END_OF_DOCUMENT_TOKEN_TO_BE_REPLACED 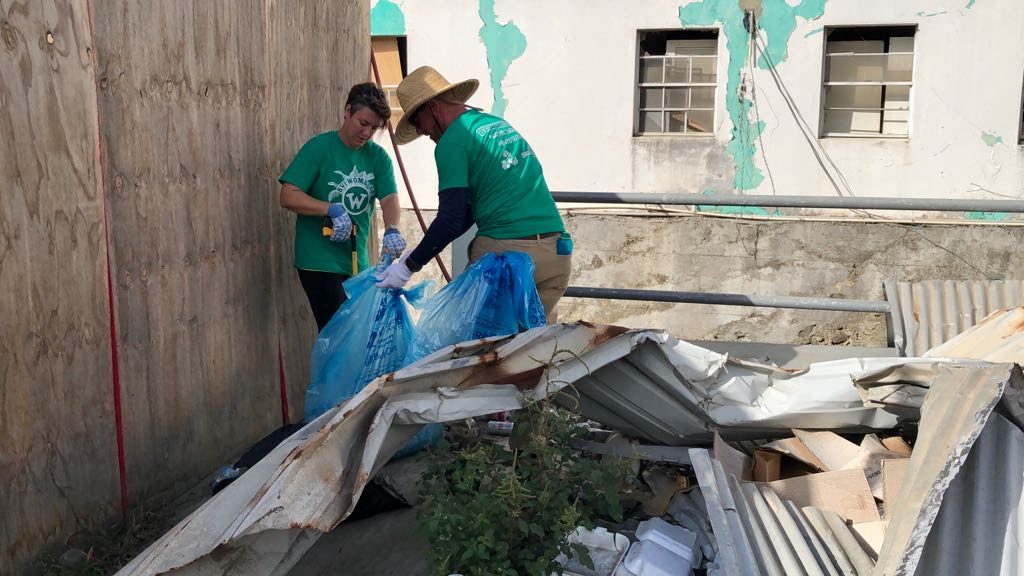 Volunteers from the BVI Wombles clear galvanised roofing from the streets of Road Town during a cleanup Saturday. (Photo: PROVIDED)

Several bins full of trash removed from the streets were just the tangible benefits of the Road Town cleanup Saturday that included more than 200 volunteers working with Green VI, the Wombles, Unite BVI and the Virgin Islands government.

However, she said another goal was to send the message to helpers that they’re not alone.

“We talked to one resident and he said that his neighbours clean and go out all the time,” she said. “But they’re not sure that anybody really does care. It’s hopeful.”

The cleanup focused on the area between the J.R. O’Neal Botanic Gardens and the Queen Elizabeth II Park.

“Obviously, choosing Road Town is the best way to demonstrate that commitment, in an area that most people in the BVI go to,” Ms. Penney said. “[It’s] he heart of the city.”

In order to get all age groups involved, there were a variety of different cleanup focuses, from small children helping with litter to older boys moving larger pieces of debris.

“All the athletic folk wanted to do the heavy lifting,” she said. “Everybody did tremendously well with the collaboration.” Ms. Penney praised the help she received from the government, saying City Manager Janis Brathwaite-Edwards was particularly “wonderful.”

“She believes in what Road Town can be,” Ms. Penney said. But the government can’t do it alone, she explained, adding that the desire to keep the VI clean has to come from within the community.

“Our values have to come from the people,” she said. “You can’t just have someone saying, ‘Hey, you need to look after this.’”

The BVI Tourist Board provided water for the volunteers and helped direct them through town.

“They said yes immediately,” she said. “It’s relevant to tourism and our product not to be covered in litter. I know that they get the fact that we really need to be doing this for ourselves. It helps our economy too.”

Ms. Penney said more volunteers joined in as the day progressed, including a family that had been cleaning up their Road Town house.

“They stopped and helped [the volunteers], so it became this beautiful organic opportunity to work together,” she said.

The day was also an opportunity to educate the community about the new recycling programme launched on Earth Day by Green VI and the Department of Waste Management, since recyclables were separated from the waste collected.

“A lot of people don’t know that all of our plastic here can be recycled,” Ms. Penney said.

VI Plastics, a plastic-recycling plant recently begun by Carrie Wright, collected all the plastic to turn it into recycling bins that will be placed in schools throughout the territory in time for next school year.

Although Road Town was the focus this time, there is a cleanup planned for June 23 in Sea Cows Bay, and another one slated for Road Town after the
August Emancipation Festival.

“We need that right now,” Ms. Penney said. “When life is a
little harder … people are trying to be part of the solution.”