Repair work on the Road Town Fire Station, which was gutted during Hurricane Irma, is under way after government signed a contract worth nearly $800,000 with Quality Construction Limited, Communications …

END_OF_DOCUMENT_TOKEN_TO_BE_REPLACED 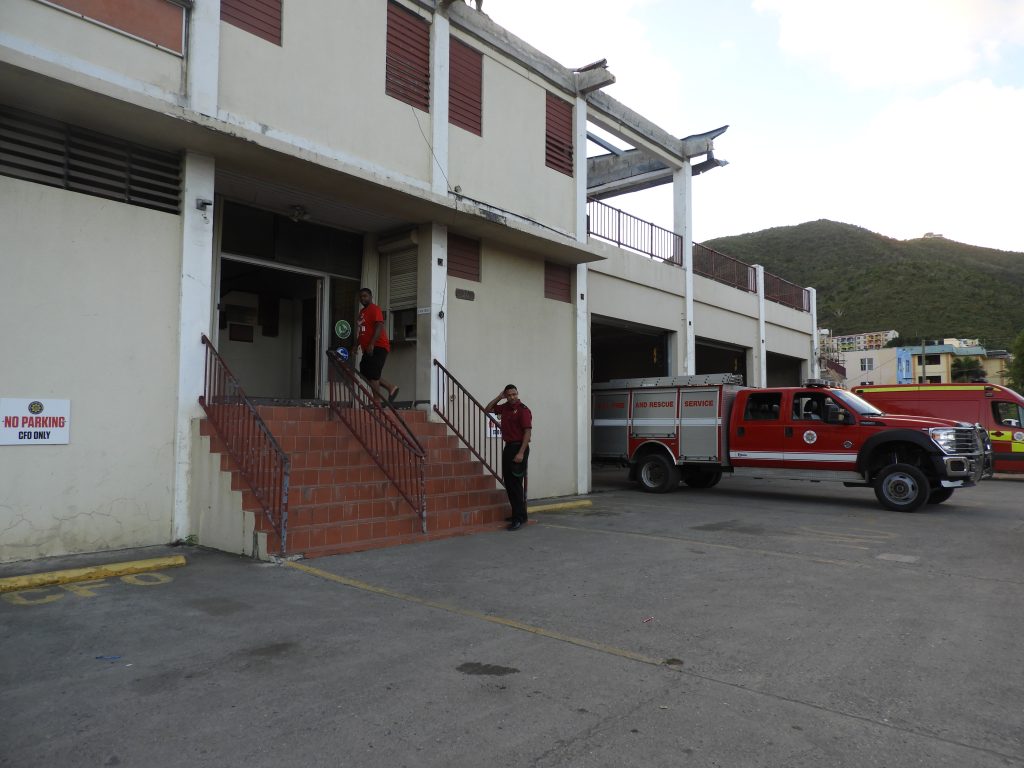 Repair work on the Road Town Fire Station, which was gutted during Hurricane Irma, is under way after government signed a contract worth nearly $800,000 with Quality Construction Limited, Communications and Works Minister Mark Vanterpool said in a Friday press conference.

Mr. Vanterpool decided to make the announcement earlier than originally planned in response to an article that appeared last Thursday on the website BVI News, which indicated that as many as 32 fire officers had been sickened by chronic leakage and mould in the building.

“We are pleased when information is out there, but we want to make sure that the information is balanced on both sides,” Mr. Vanterpool said. “The report said fairly that they were trying to get to the permanent secretary for comments, but were unable to, so I am here so that the comments can come from the minister instead.”

He also expressed a wish that “we could have gotten to it much sooner, but it took some time to get things in the right order.” “This is because we want to bring it back much stronger and better,” he said.

In an audio recording released last Thursday by GIS, Chief Fire Officer McLean, who was the source for the BVI News article, thanked Mr. Vanterpool for joining him on a recent tour of the facilities and said the minister was “extremely concerned” about the safety and well-being of the officers.

Although the chief acknowledged that the mould issue needed to addressed and had sickened officers from time to time, he disputed what he believed to be the article’s implication that more than 30 officers had been affected at once.

“That is not exactly correct,” Mr. McLean said. “We did have some officers that were ill, but we didn’t have 30 officers out sick. If we did, we wouldn’t be able to function.”

Although the chief described conditions as “a bit uncomfortable right now,” he said Mr. Vanterpool has listened to his concerns.

“Yes, I agree it’s been a long time coming and I’m glad we are seeing something being done,” he said. The minister toured the barracks and administration areas, where he observed mould and spaces that lacked tiling, taking note of the effect of such issues on the morale of the officers, according to Mr. McLean. “He was asking whether something could be done today,” he said.

Mr. McLean added that Rotary clubs, Lions clubs and other organisations and individuals should be acknowledged for donating time, money and materials to the cause.

“You can’t just come to a government agency and give them money,” he said. “The process is not as simple as you think.”

He added that while he acknowledges the pressure and challenges the ministry has been under, he is still not satisfied with the conditions and would not be “until we have new appliances and until we have a brand new building. … But everything comes in steps.”

According to the minister, 11 contractors were invited to bid, five returned bids and one was selected after evaluation.

On Nov. 28, the Cabinet selected Quality Construction Limited for a contract of $795,541.61. Mr. McLean confirmed this week that the project began Saturday, with workers arriving to clear the area. The minister called it “regrettable” that the project took this long to start, adding that the Public Works Department first assessed the station in November 2017, with a final proposal submitted to the ministry in August. At the press conference, he showed the plans to reporters and acknowledged the patience of the fire officers.

“The contract is to be completed within five to six months, and hopefully the team at Virgin Islands Fire and Rescue Services will have a better headquarters soon,” he said.

He noted that the restoration process for the police headquarters Sir Olva Georges Plaza has also begun, overseen by the Deputy Governor’s Office alongside the ministry.

New vehicles
Mr. Vanterpool also announced on Friday that the ministry has signed a purchase agreement for five HMA F350 Rapid Response trucks, which include a Hydrus 20 Gallons Per Mile Skid Unit and a 200-gallon water tank from HMA Fire LLC.

The cost amounts to around $447,000. The VIFRS will also receive one 350 GPM Vision Attack Pumper on a 2019 Ford F550 chassis with a Bronze JME Rear Pump, for $341,000. Mr. Vanterpool said he is confident that the new equipment will boost the efforts of the team to save and protect lives and prevent and extinguish fires.