Two masked men were captured on a security camera apparently attempting to break in to a gas station in Pasea Estate in the early hours of Tuesday morning. The bungled …

END_OF_DOCUMENT_TOKEN_TO_BE_REPLACED 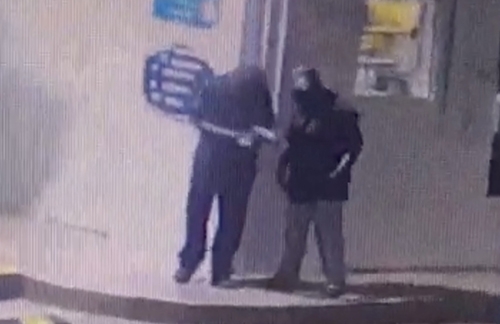 The men seem to struggle with the weapon and spend a few moments passing it between them. Photo: VIDEO STILL

Two masked men were captured on a security camera apparently attempting to break in to a gas station in Pasea Estate in the early hours of Tuesday morning.

The bungled robbery was one of three firearm incidents that have taken place across the territory this week, according to police.

A video obtained by The BVI Beacon appears to show that the event unfolded shortly after 2 a.m. at Delta Petroleum Gas Station in Pasea Estate.

Two men appear to be talking to someone inside the building before attempting to fire a gun at the glass panel in the front door.

They seem to struggle with the weapon for a few moments before running away from the scene.

According to a Police Information Office press release, on Sunday morning just after midnight two masked men also held a businessman at gunpoint on Virgin Gorda.

They were described to police as 5 feet 6 inches and 5 feet 9 inches tall and wearing dark clothing.

And last Thursday evening at about 9 p.m. a lone masked man held a businessman at gunpoint in Port Purcell.

Cash was stolen from the victims in both cases.

“No injuries were reported in any of the incidents,” the press release stated.

In response to the incidents, Police Commissioner Michael Matthews made an appeal to the public.

He asked residents to provide names of people suspected of having illegal firearms or importing them into the territory.

“The ease with which persons are able to secure firearms in this territory is no doubt because security of our borders is difficult to police 24 hours a day,” he said.

The commissioner stressed that this is not a problem that is unique to the Virgin Islands, as other Caribbean territories face a similar “dilemma.”

“We just need to put fear in those who dare to have a firearm or to make it very difficult for someone to keep it or carry it around,” he said.

He added that this happens in a society where there is an “absolute intolerance” to those with illegal firearms.

“Therefore, report anyone who is seen or who is believed to have a firearm, and we will do the rest,” he said.

Mr. Matthews explained that he is carrying out a “territory-wide crackdown” on firearms.

He said stop-and-search operations are no longer as effective as they used to be and people instead need to provide direct information — even if they have to do so anonymously.

“Just tell us directly who has firearms and where they are,” he said. “We don’t need to know anything else. … This will add value and productivity to the time we are out there.”

Anyone with information on any of the recent crimes can contact the police Intelligence Unit on 368-9339 or Crime Stoppers anonymously on 800-8477.