On Saturday morning, a group of 7-to-11-year-olds donned yellow plastic hardhats to learn about the territory’s electrical grid right from the source: BVI Electricity Corporation employees. “Suppose there’s a wire …

END_OF_DOCUMENT_TOKEN_TO_BE_REPLACED 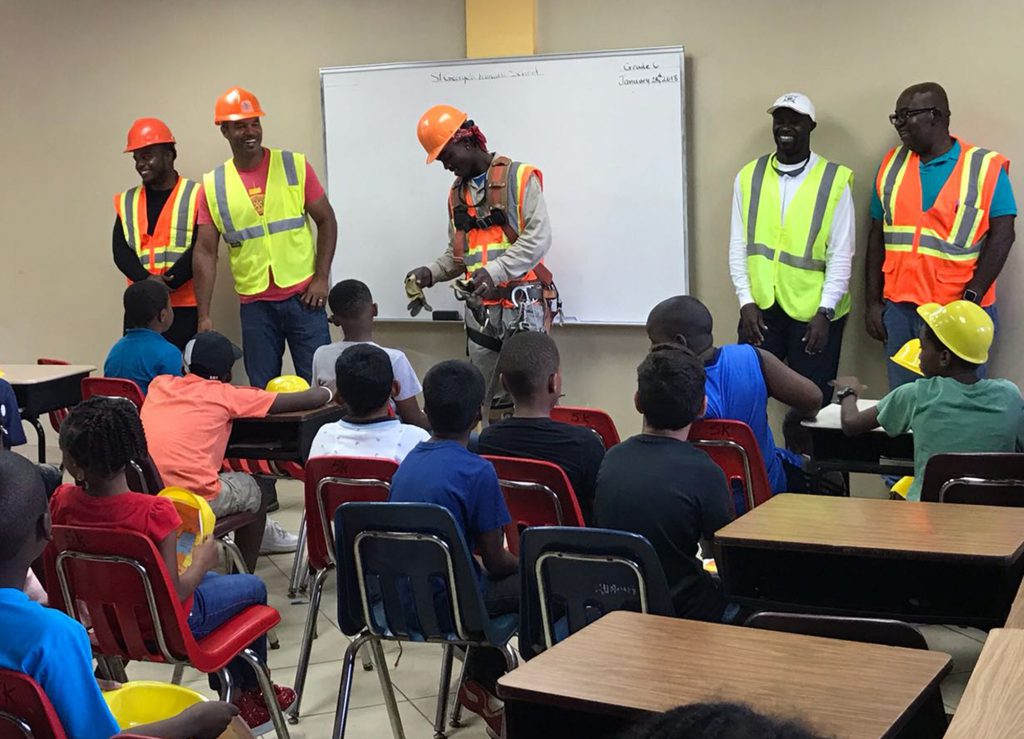 Primary schoolers attended a career fair on Saturday morning, where professionals like linesmen explained the challenges — and interesting stories — that come along with their job. Photo: AMANDA ULRICH

On Saturday morning, a group of 7-to-11-year-olds donned yellow plastic hardhats to learn about the territory’s electrical grid right from the source: BVI Electricity Corporation employees.

“Suppose there’s a wire in a puddle of water, and you step in the puddle but you don’t touch the wire: Will you still get shocked?” one linesman asked the group.

The answer was a resounding “yes.”

“If it’s a live wire in a puddle of water and you touch the water, yes, you will get shocked,” he confirmed. “Every time you see a wire on the ground you have to think: That could be a live wire.’ Don’t touch it.”

The career expo at St. George’s Primary School, an annual event hosted by Rotaract Club of Tortola, was structured a little differently this year.

For one, the typical location for the fair — theNoel Lloyd Positive Action Movement Park — was deemed unusable after sustaining hurricane damage. The types of careers represented were also intentionally altered.

“Before we’ve had a customs officer, a firefighter, police officer,” explained Rotaract President Tuneisha Johnson. “But this year because Hurricane Irma came, the focus is on rebuild — the idea is we are building. So we have an electrician, we have a contractor, different persons who assist in the rebuilding effort.”

All told, electricians, construction workers, land appraisers, architects and contractors spoke to the students and shared their expertise and how they have applied it in the post-Irma landscape. The event was themed “We All Build.”

“I think in general kids only know about lawyers, doctors, so we wanted to reach out to other professions that they might not have known about,” Ms. Johnson said. “So far they’re excited about hearing different things.”

January is vocational service month for Rotaract, and the organisation also urged potential new members between the ages of 18 and 30 to get involved with the group and with future events. Club meetings are held every first, third and fifth Friday at 5:30 p.m. at the Department of Youth Affairs and Sports Conference Room.