One by one, members of the Rotary Club of Tortola hopped on the bathroom scale set up in the middle of The Moorings and looked down nervously. “I drank as …

END_OF_DOCUMENT_TOKEN_TO_BE_REPLACED 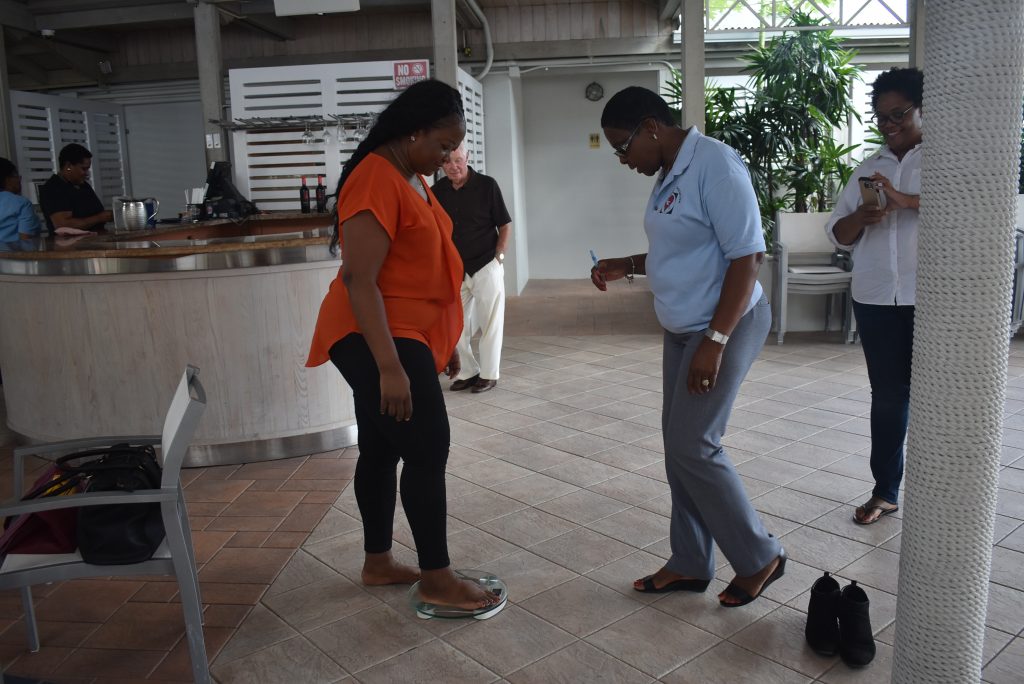 Rotarians get on the scale at the first weigh-in of the Lose to Win Challenge last Thursday at The Moorings. (Photo: CLAIRE SHEFCHIK)

One by one, members of the Rotary Club of Tortola hopped on the bathroom scale set up in the middle of The Moorings and looked down nervously.

Normally, the last thing most people want to see on the scale is a big number. But since this was the first official weigh-in of Lose to Win Challenge, a Rotary Club of Tortola initiative in which participants raise money from sponsors for every pound they lose, it helped to be hefty.

Now in its 14th year, Lose to Win was the brainchild of Rotary Past President Elton Georges, the territory’s former deputy governor, who died earlier this year.

“He realised the prevalence of diabetes in the BVI and the need for healthy living,” said Merrick Watson, director of membership and a Lose to Win committee member.

Traditionally, each member of the club would propose to lose a specific amount of weight, seeking sponsors pound for pound, with Rotary matching all contributions to benefit the Diabetes Association. Those who don’t mean their goal pay a fine.

“Whether or not someone loses weight, although that’s what we want them to do, they’ll still be able to make a monetary contribution,” Mr. Watson said.

Another weigh-in will take place today, with the final one set for Dec. 20.

He added that the programme is especially vital in the VI, which has one of the highest rates of diabetes in the region. According to the International Diabetes Federation, the prevalence of the disease in the VI is at 14 percent, compared to an overall regional percentage of nine.

“It’s a very small country, so any elevation in the rates of diabetes will show up in the statistics,” Mr. Watson said. “[Still], it’s very alarming. Health and wellness is a major focus of Rotary International and something we want to use the podium to reach out and address.”

As waistlines contract, the challenge itself will expand, since Rotary is making a concerted effort this year to reach out to the community.

This year, 11 entities, including law firms and trust companies, are participating.

“We didn’t want it to be just a Rotary thing,” he explained. “We wanted to make it a BVI thing; it affects everybody.”

According to Rotary 7020 District Governor-elect Delma Maduro, the club is encouraging human resources managers to sign up employees in groups in hopes they can provide moral support for each other’s weight-loss efforts.

“The idea is that this will lead to an overall better lifestyle … so we can be happier and healthier,” she said.

Mr. Watson pointed out that the programme’s legacy is already evident around the territory, including in the growth of the Saturday Morning Walkers, another passion project of Mr. Georges.

Thanks in part to Lose to Win, the group’s ranks have expanded, with participants choosing to incorporate walking into their lifestyles. Additionally, Mr. Watson said, the programme has prompted some members to continue to set ambitious goals for themselves.

“Last year our secretary, Bernadette [Brathwaite], led the charge, losing 30 pounds last year from this programme and kept off the bulk of it for a very long time,” he said.

Ms. Maduro has even bigger plans for the challenge. As district governor-elect for the 10 countries making up Rotary District 7020, she hopes that the VI will serve as an example for others looking to implement a management programme for a disease that is still prevalent throughout the Caribbean.

Mr. Watson added that he believes Mr. Georges would have been pleased to see the programme continue to expand, though he likely would have shunned the limelight, choosing to pass the baton to younger Rotarians.

“We thought that this year having lost him from both the Rotary family and the BVI family, that we needed to do something to commemorate his memory,” he said. “He was a very gentle, brilliant man with a very pronounced presence, and I absolutely miss him.”