Rowe, commissioner face off during COI

A lawyer representing seven House of Assembly members in the Commission of Inquiry lobbed several written complaints last week about the commission and its conduct, tackling topics ranging from the …

END_OF_DOCUMENT_TOKEN_TO_BE_REPLACED 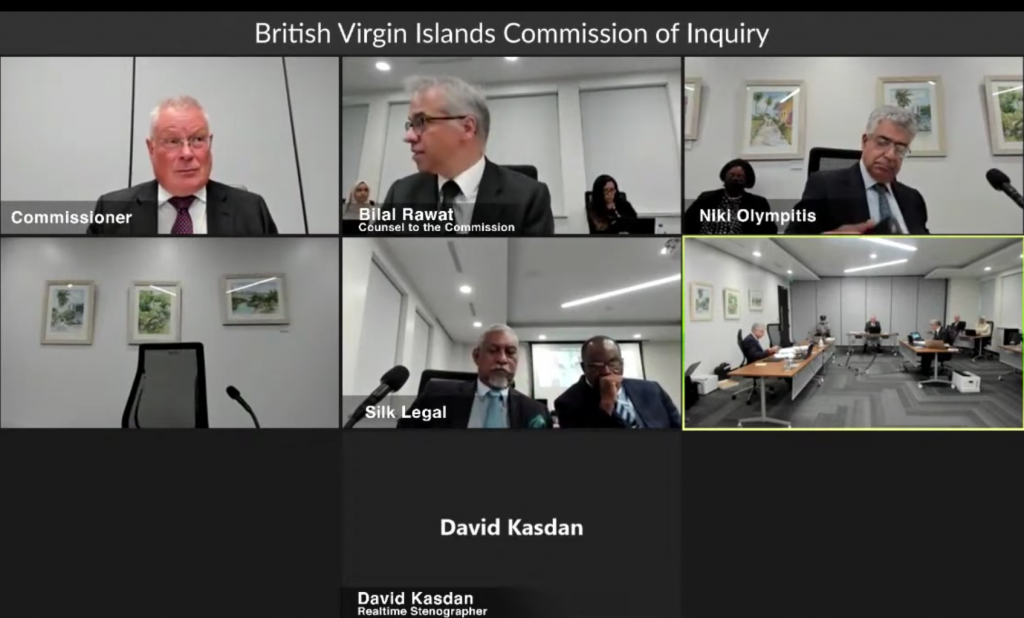 Lawyer Richard Rowe of Silk Legal (bottom), who represents seven House of Assembly members in the Commission of Inquiry, faced off with Commissioner Sir Gary Hickinbottom and his team during a live hearing on Monday morning.

A lawyer representing seven House of Assembly members in the Commission of Inquiry lobbed several written complaints last week about the commission and its conduct, tackling topics ranging from the COI team’s qualifications to the tone of their correspondence.

According to Mr. Rawat, upon receipt of the firm’s initial letter on Tuesday, June 8, Commissioner Sir Gary Hickinbottom wrote back and asked Mr. Rowe and his team to provide written submissions on the matters and any supporting documents by Friday.

They did not, Mr. Rawat said.

“On Thursday, June 10, Silk Legal sent an email explaining that because Friday was a public holiday, it was ‘impossible’ to provide any
submissions, in reliance on the Interpretation Act,” Mr. Rawat said.

He added that Silk gave the same argument as to why one of its clients, Opposition Leader Marlon Penn, was unable to provide a position statement the COI had requested.

Mr. Rowe claimed in the email that Section 16 of the Interpretation Act means that, due to the public holiday on Friday, the submissions from
Mr. Rowe’s clients were not due on Friday as requested, but on Monday, according to Sir Gary, who added that Mr. Rowe was using “muddled
thinking” to reach that conclusion.

In fact, Sir Gary explained, the act says no such thing. Mr. Rowe did not deny this claim.

“It’s [the] understanding of the Interpretation Act, and its application in the Virgin Islands, that we apply,” Mr. Rowe said.

Sir Gary countered, “My interpretation and my understanding is that you accept that that’s not what the act says, but you say that that’s the
practice in the Virgin Islands.”

Mr. Rowe also brought up a practical issue during the hearing.

“On the public holiday, having run out of paper, there is no way we could have produced and served to you [the documents] because no place
was open to purchase paper for the six bundles,” he said.

But Sir Gary said Mr. Rowe had been invited to apply for extra time, but he did not do so.

“Had you done so, then we may have been able to deal with the matter,” he said. “You made no application.”

One of the complaints Mr. Rowe raised in his letter, and reiterated on Monday, was that not all members of the COI legal team have been admitted to practise law in the VI. Singling out Mr. Rawat, he suggested that they might be in violation of Section 18 of the Legal Profession Act 2015.

However, Sir Gary said that in his opinion, the act didn’t apply in this case.

“I’ve considered this, and I don’t consider that the work being undertaken in support of the Commission of Inquiry, as opposed to participants, to be the practise of BVI law,” he said.

Nevertheless, Sir Gary said that it was “appropriate for those assisting the commission of inquiry who are eligible for admission as BVI legal practitioners to be admitted and to obtain practising certificates,” and that he would “see that the appropriate applications are filed.”

He added that Mr. Rawat was appointed to his role by Attorney General Dawn Smith.

Another of Mr. Rowe’s written complaints asserted that the COI violated six socalled “Salmon principles,” which were set out in the report of the Royal Commission chaired by Lord Justice Cyril Salmon in 1966 and approved in a case from Antigua and Barbuda in 2003.

The second of those principles states that “before  any person who is involved in an inquiry is called as a witness, they should be informed of any allegations made against them and the substance of the evidence in
support of them.”

“I’ve been at pains to emphasise from the outset of the Commission of Inquiry that I am not conducting a trial,” Sir Gary said. “I’m conducting an
inquiry, an investigation. And we are still in the investigative stage of that process.”

In his letter, Mr. Rowe also repeated previously discussed concerns about the Foreign, Commonwealth and Development Office acting as data processor for the COI, as well as potential conflicts of interest of the attorney general in representing the HOA.

The commissioner declined to discuss those issues, however, noting that he addressed them previously.

“I have dealt with that in the past: It’s dealt with in the press notice,” he said. “The data are secure.”

Mr. Rowe did not press those issues.

Next, the commissioner addressed Mr. Rowe’s written complaint over the tone of the COI’s correspondence.

“The tone is formal; it is not intended to be discourteous,” Sir Gary explained, adding that neither the premier, deputy premier, ministers, governor or deputy governor had complained about the tone.

Mr. Rowe also raised written objections to the bundles used in the hearings, ranging from the safety and privacy of the data they contain, to the fact they weren’t provided far enough in advance.

However, Mr. Rawat explained, many of the documents requested by the COI are arriving late or incomplete, making it difficult to assemble the bundles in advance.

Additionally, he said, receiving the bundles in advance “isn’t perhaps as pivotal because, ultimately, we are asking questions and seeking information from them about matters that are within their own knowledge.”

He added that the bundles are confidential, and any potential disclosure of sensitive information could be addressed by the three-minute delay in
the live feed through which the hearings are broadcast.

“The documents are coming in very late,” he said. “And, for example, for next week we can’t put the bundles together for next week because we haven’t had full disclosure yet from you.”