Colin Campbell was mixing a “Mount Gay XO Old-Fashioned” cocktail on Sunday afternoon at the Cooper Island Rum Festival. “We’re gonna have a two-ounce pour in a glass, a splash …

END_OF_DOCUMENT_TOKEN_TO_BE_REPLACED 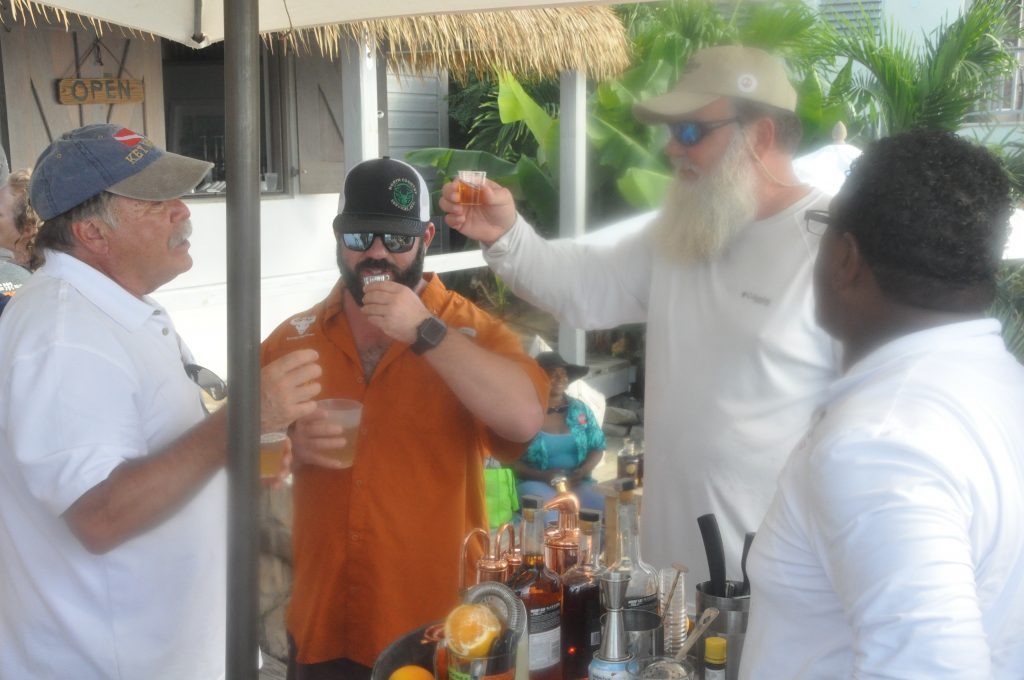 “We’re gonna have a two-ounce pour in a glass, a splash of bitters and a cube of ice,” explained Mr. Campbell, the senior brand manager for Road Town Wholesale, as a group of yachters watched him work. “We’re gonna use a little bit of simple syrup over some ice, and we’re gonna stir that slightly just to chill it down for a second, and then we’re gonna add some zest to give it a little bit of floral — orange zest that is.”

His rapt audience was among some 400 people who attended the second Cooper Island Rum Festival, which was organised by the resort to coincide with the ongoing BVI Food Fete this month.

As guitarist Orin Hodge performed on an outdoor patio, residents and tourists milled around sampling rums from across the Caribbean provided by six vendors, including the Virgin Islands’ own Callwood distillery in Cane Garden Bay.

“We got in last night and sailed immediately over here for the Rum Festival,” he said, adding that his group didn’t learn about the Food Fete until they arrived but they were planning to take full advantage of the ongoing activities.

At the moment, he was hanging around hoping for a taste of Mount Gay 1703, a specialty rum that Mr. Campbell had promised to serve promptly at 4:30 p.m.

Such high-end rums are becoming increasingly popular, and the festival was designed in part to showcase the different varieties available in the VI.

Cooper Island’s rum bar now offers around 260 varieties — more than any other in the Caribbean, according to bar manager Glen Rooney, who was serving mixed drinks in front of a wall lined with dozens of varieties of the liquor.

“The aim of this season is to get the Guinness world record for commercially available rum,” he said. “It’s like 340 or something.”

The bar started about five years ago as a collection of some 40 bottles in the resort’s coffee shop.

“I came here maybe three and a half years ago, and now it’s my job to grow the collection and expand it,” explained the manager, an Irishman who said his knowledge of whiskey has helped him learn about the different rum varieties. “Coming over here, it translates to rum. It’s kind of the same techniques, so it was easy. And now I love it.”

To grow the collection, he travels to festivals and conferences abroad. But sometimes that’s not necessary, he said, holding up a bottle of five-year-old Alto Grande he received from a Puerto Rican visitor on Sunday.

“This isn’t available on the market yet and he brought this rum down for us to try,” Mr. Rooney said, adding, “So a lot of the time we don’t have to go looking: People come to us. I love when that happens.”

Back outside, Mr. Campbell explained his philosophy of marketing rums like the Barbados-based Mount Gay.

For Mount Gay, the oldest commercial rum distillery in the world, that history goes back at least to a deed dated 1703.

But before that, the liquor was invented by accident, Mr. Campbell explained.

“The Europeans come and they all take the sugar and stuff and they leave with the molasses, which they called black gold,” he said. “And then the journey back they took some, and to their surprise when they reached back home it wasn’t molasses anymore: It’s become something really fine.”

Visitors on Sunday were eager to learn, he said.

“I’ve been through the story more than 50 times for the day,” he said. “It’s really good, because that’s what Mount Gay is all about: It’s all about the history.”

The Cooper Island Rum Festival was first held during the 2016 BVI Food Fete.

“It was kind of an experiment, really, just to see if it would be something people were interested in,” said Meron Napier, operations manager at the resort. “When we opened the rum bar a few years ago, it really took off, and we said we can’t believe the BVI doesn’t have a rum festival. So we set it up and thought it was going to be small — and that one got kind of out of hand.”

After sustaining damage in Hurricane Irma, the resort skipped the festival last year, but Sunday’s event was “absolutely amazing,” the manager said.

“We got such a good response from locals and boaters,” she said, adding, “It’s the biggest show that we’ve seen.”

Next year, organisers plan to make it bigger, in part by working with the BVI Tourist Board to operate a ferry from Tortola.

“We’re going to try and get the farms involved,” Ms. Napier added. “We use a lot of the farms to source the ingredients for the restaurant but also for the bars.”

Such plans are music to the ears of BVITB Events Coordinator Cindy Rosan-Jones.

“It’s good because we encourage our partners to come on board during November,” Ms. Rosan-Jones said, adding, “We don’t want to do it all; we want them to actually buy in and be a part. This is actually their event — we work with them to push it — and it’s a great idea.”