When government officials broke ground on the Market Square revitalisation in October 2020, they said the project would be completed in about nine months. That didn’t happen, but completion is …

END_OF_DOCUMENT_TOKEN_TO_BE_REPLACED 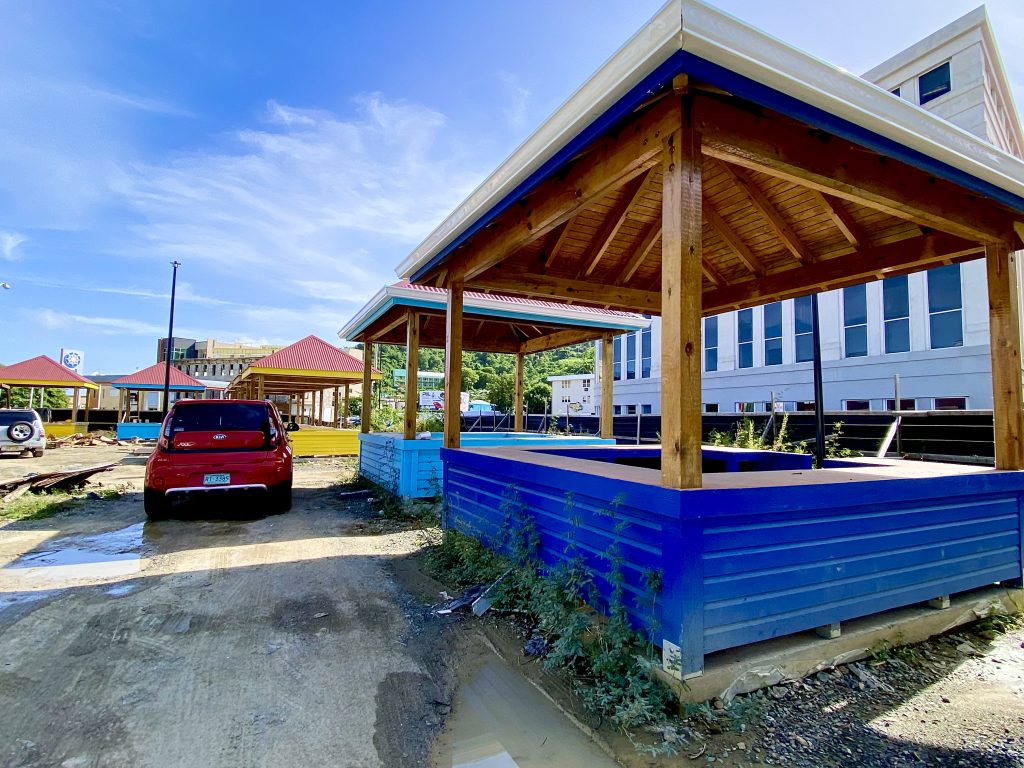 The Market Square project is set for completion in the first quarter of 2023, according to Deputy Premier Kye Rymer. (Photo: DANA KAMPA)

When government officials broke ground on the Market Square revitalisation in October 2020, they said the project would be completed in about nine months.

That didn’t happen, but completion is now set for the first quarter of 2023, Deputy Premier Kye Rymer said last week.

So far, the Ministry for Communications and Works has invited more than 30 contractors from the Ministry of Finance’s contractor database to submit bids for six petty-contract works at the square, Mr. Rymer told the House of Assembly on Oct. 25.

“The advent of the new Procurement Act requires that a competitive bid process be undertaken, even for petty contracts or works less than $100,000,” Mr. Rymer explained.

“The Ministry of Communications and Works had been using restricted tenders to engage contractors for works at the Market Square project even prior to the act coming into force.”

Mr. Rymer also detailed the progress on the square, which he said will eventually feature 16 kiosks, a gazebo, green spaces, restrooms, a bus depot and displays of Virgin Islands artefacts.

So far, he explained, contractors have installed more than 1,000 linear feet of water lines, a drainage system, 15 solar lights, and electrical lines to power the 16 expected kiosks in the square, 12 of which are “near to being completed,” he said.

The remaining four are set to be complete next month, and upon completion there will be six 10-by-10-foot kiosks and ten 12-by-12-foot kiosks for vendors, he added.

In the meantime, the ministry has been working with Junior Minister for Trade and Economic Development Shereen Flax-Charles and personnel from the Department of Trade, Investment Promotion and Consumer Affairs to develop a “comprehensive application and evaluation process” for the kiosks, according to the minister.

Mr. Rymer said to expect more information about applications by the end of the year.

“Shortly, we will be soliciting bids from landscape contractors for the landscaping works at the Market Square,” he said. “Also, bids will be solicited for the supply and installation of shutters for the 16 kiosks.”

The bandstand building has also been completed “and will serve as a central gathering point for any events to be conducted at the Market Square,” Mr. Rymer said.

The bathroom building, also set for completion next month, will provide a total of eight combined male and female toilet stalls and be fully handicapped accessible, according to the minister.

At the October 2020 ground-breaking ceremony, Chief Planner Greg Adams said the project marks a significant step toward refreshing the Road Town area through projects that could be quickly implemented and that would have long-term positive effects for the community.

Most schematics of the Market Square plans were developed in-house at the Town and Country Planning Department in partnership with the ministry, Mr. Adams said at the time. The firm 3DE Limited created the final architectural drawings.