Debrah Hill hasn’t lived with her children for 14 years, she said. She hasn’t seen them in five. She became homeless after losing her job in 2003, often staying with …

END_OF_DOCUMENT_TOKEN_TO_BE_REPLACED 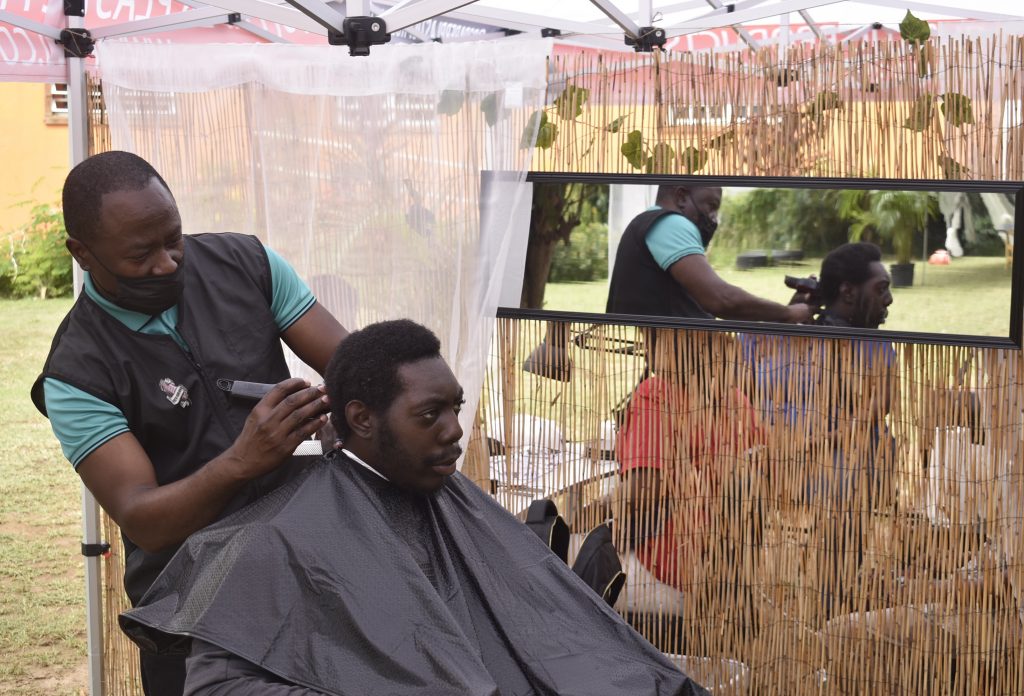 At “See Me: Not my Limitations,” an outreach event at the Safe Haven Transitional Centre on Nov. 18, Deandre Johnson received a haircut free of charge. (Photo: JOEY WALDINGER)

Debrah Hill hasn’t lived with her children for 14 years, she said. She hasn’t seen them in five. She became homeless after losing her job in 2003, often staying with family in St.Thomas, though stigma in Tortola around her mental health prevented her from getting back on her feet, she said.

Ms. Hill is now one of 14 people living at the Safe Haven Transitional Centre, a Johnsons Ghut institution that helps homeless people rehabilitate and regain independence.

But according to Loren Smith, a social worker at the centre, clients like Ms. Hill often face an uphill battle.

In 2021, for the first time in Mr. Smith’s career at the centre, “ We haven’t been able to transition anyone out,” he said.

The confluence of Hurricane Irma and the Covid-19 pandemic has exacerbated the difficulties that homeless people face in the VI, and Safe Haven staff are now trying to find new ways to support the territory’s vulnerable population.

The centre’s “See Me: Not My Limitations” outreach on Nov. 18 was one such effort to expand their support network.

Across the grassy yard from where Ms. Hill and more than a dozen others sat and ate soup prepared by Jamaica Kitchen and Pirates Bight, barbers, massage therapists and manicurists set up their stations beneath pop-up tents, offering free cuts, massages and nail treatments free of charge.

The Red Cross set up a booth giving away clothing and advertising other services.

Safe Haven staff also delivered soup to residents in East End and other communities who weren’t able to make the trek to Road Town.

Andrae White, who is trying to start a hair salon of his own, was one of the barbers who donated his time.

“I love giving,” he said when asked what drew him to the outreach event, adding, “I think giving is more important than receiving.”

Safe Haven Launched in 2015 as a drug treatment facility under a different name, the Safe Haven Transitional Centre uses an individualised programme to help its clients work through emotional or mental problems, find work and a place to live, and eventually transition out of the centre’s care, Mr. Smith said.

Clients are referred to the centre from different government and medical agencies, though they must meet a certain criteria of mental fitness before moving into the centre, as they are expected to engage in group activities, care for their daily hygiene, and complete chores around the centre, he explained.

Sometimes, this means that a client must take prescribed medications or complete a drug rehabilitation programme before moving in, Mr. Smith said.

Once admitted, each client is given a treatment plan, and Safe Haven staff monitor their progress as they work towards meeting different targets, Mr. Smith said.

Clients’ days are regimented, as they all eat, exercise, attend therapy, and take their medications at predetermined times, though staff members ensure that they also have free time for leisure and completing chores, Mr. Smith said.

As financial pressure mounted over the last few years for struggling VI residents, the centre has filled to capacity and clients are having a more difficult time making it on their own, Mr. Smith said.

Although there are about four people living at the centre who are fit enough to hold down an entry-level job, such work would not pay enough to cover the cost of rent, he added.

And the centre is facing burdens of its own, Mr. Smith said.

There are only six staff members there — four aides and two social workers — and while Mr. Smith recognises that government is doing what it can to fund the centre, it still is under-resourced, he said.

In the face of these challenges, finding novel ways to reach needy people, such as the Nov. 18 outreach event, is ever more important, Mr. Smith said.

“We have to let them know we see you and we care,” he added.

Ms. Hill loved her old job at the government’sGazette, where she worked from 1998 until 2003, she said.

“It was fun,” she said of having so much interaction with customers.

But after losing that job, she was not able to find steady employment again, she said.

Even when she would set up interviews, the potential employers would pass on her because of her mental health problems, she added.

For a while, Ms. Hill said she was able to get by on direct payments from government ministers and a Social Security stipend, but she claims the ministers have told her they no longer have money in the budget for the payments, and the funds she receives from Social Security are just enough to cover the costs of food.

She also spent a lot of time with her family in St. Thomas, and was once given money from her aunt, but that too has runout, she said.

Two years ago, she arrived in the Safe Haven Transitional Centre, a place that she says has been beneficial for her.

Still, she says she is growing bored of the repetitiveness that defines life in the centre, and she yearns for her old job, and to reunite with her children.

“If you’re just starting out, it’s good,” Ms. Hill said. “At some point, you still need to get out.”