In a video that was circulated to Royal BVI Yacht Club youth sailors and members, sailing instructor Rob Lind sat on his Long Bay balcony demonstrating how to sail in …

END_OF_DOCUMENT_TOKEN_TO_BE_REPLACED 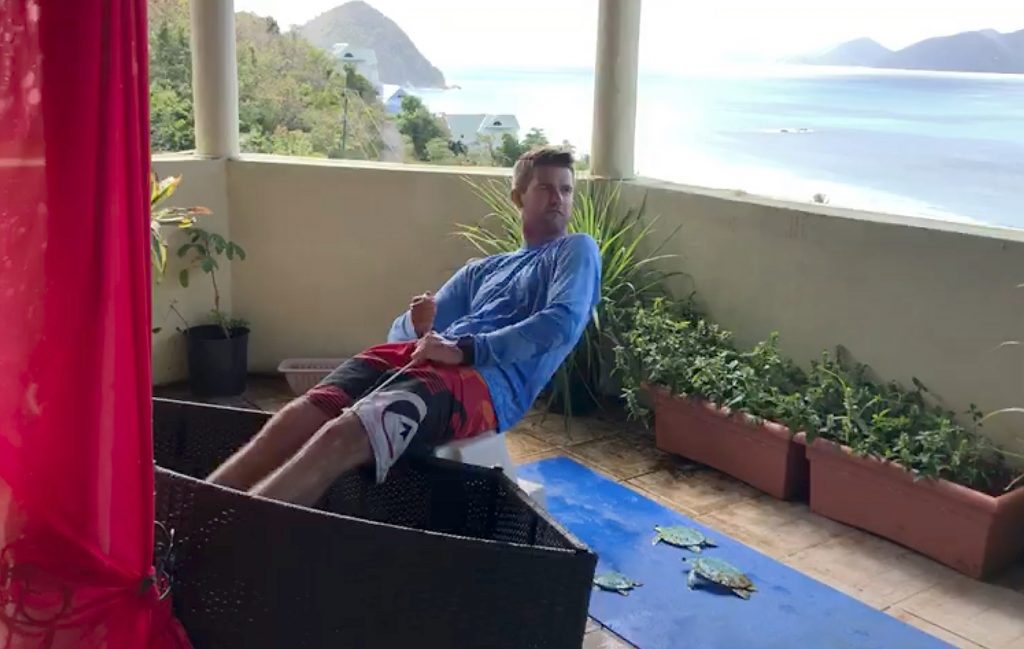 In a video that was circulated to Royal BVI Yacht Club youth sailors and members, sailing instructor Rob Lind sat on his Long Bay balcony demonstrating how to sail in windy and wet conditions.

His makeshift sailboat was constructed from patio furniture, with a red curtain as a sail. To replicate the ocean, a blue yoga mat spread below him was donned with metal turtle sculptures.

“Today, we are going to be talking about body movement and positioning your boat through waves,” Mr. Lind said at the opening of the video, as he tugged on a small rope as if he were getting the boat in position.

The video continues for a little more than four minutes, with Mr. Lind giving tips and instructions while an off-camera person sporadically throws water on him to create the effect of splashing waves.

“Don’t worry: You are sailing; you are supposed to get wet,” Mr. Lind said to the camera, as he tried to hold back from laughing after being doused with water.

The RBVIYC, like many other sports associations in the Virgin Islands, has turned to the internet to engage members and athletes stuck at home during the pandemic.

“For all the kids that we have in our programme, it is a huge part of their week to come to their sailing classes,” RBVIYC Manager Tamsin Rand said. “We’ve been trying to keep sailing present for them and give that sense that we haven’t forgotten them. Sailing is still here and we are ready to start again.”

Throughout the year, the RBVIYC works with about 100 youth sailors, according to the yacht club manager.

During the lockdown, the non-profit organisation has sent out several videos via email and WhatsApp of instructors giving tips to sailors. The videos include topics like sailing techniques, tying knots and terminology.

“One of our coaches is from Iceland and he did a really fun video on sailing terms and how they’ve come from Icelandic words,” Ms. Rand said.

The videos are supposed to be fun and are not required, according to the yacht club manager.

“We are mindful that parents have got so much coming from schools, clubs and are kind of being bombarded,” Ms. Rand said. “We want to be able to contribute to give people a little bit of something to keep them entertained in this really, really peculiar time.”

The videos, for the most part, are not public, and are only available to members and sailors who participate in RBVIYC sailing programmes.

“I’ve been trying not to go too much everything public or on Facebook,” Ms. Rand said. “I’m not sure why I decided that, but I did.”

However, there have been some initiatives and events open to the public, including Wednesday Quiz Night and a miniature Optimist boat-making competition.

“It was really fun actually: Even my dad got a bit carried away,” Ms. Rand said. “We had some that involved Legos, corks — and others with little wooden blocks. We asked if they floated: Not all of them did.”

The videos and initiatives have been well received, but some parents are asking for more. The RBVIYC has been asked for recommendations of good sailing books and movies while everyone is cooped up at home.

The next step is getting sailors back on the water, but organisers are waiting for permission before they can start sailing again. However, Ms. Rand feels the sport will be able to make the necessary changes to insure safety.

“I think there can be a good recovery for sailing, because first of all the kids are on their own in a boat,” she said. “You got some very nice, easy social distancing right there. I feel like as a sport, we’re probably one of the lucky ones. A lot of the activity is solo.”

Prior to the lockdown, the club had already started implementing various sanitisation measures, including social distancing and cleaning the boats after sailing.

“People are just going to be so delighted to get back to doing what they love to do,” Ms. Rand said. “But it’s all about being sensible and taking as many precautions as we can. And I think that for any sport, there is a psychological benefit for kids and for parents. We really felt it after Irma to be able to get people out sailing again. It was such a relief, and I feel we’re going to feel a similar way with this.”