Live-aboard sailor Mark Lavezzi misses the old Trellis Bay. And on Sunday, with the help of a truck, a few wheelbarrows and lots of friends, he began the process of …

END_OF_DOCUMENT_TOKEN_TO_BE_REPLACED 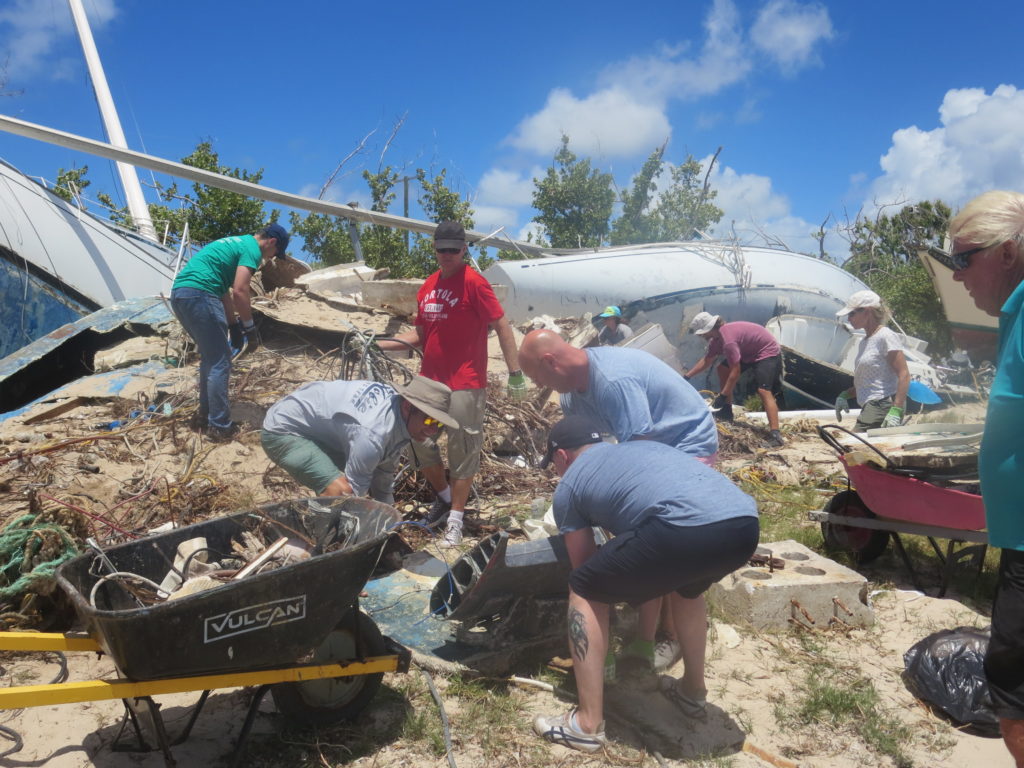 Volunteers move a discarded boat motor from atop a pile of hurricane debris in Trellis Bay. (Photo: CLAIRE SHEFCHIK)

Live-aboard sailor Mark Lavezzi misses the old Trellis Bay. And on Sunday, with the help of a truck, a few wheelbarrows and lots of friends, he began the process of taking it back.

“Last year when I came in here it was absolutely fantastic: You had Jeremy’s Kitchen, Trellis Bay Market, Marina Cay, and then Irma — boom! — gone,” said the native of Yorkshire, England, as he stood on the beach taking in a 360-degree view of the bay.

More than eight months after Hurricane Irma, it was still littered with debris and wrecked boats.

‘That somebody is me’

In the fall, Mr. Lavezzi and his wife Tracey sailed their boat to Dominica, Antigua and finally to Virgin Gorda, just in time for Christmas.

“I was dressed as Santa and we gave out presents,” he said. “But we always based ourselves here [in Trellis].”

He knew that without an influx of cash, some of the wrecked boats would remain indefinitely.

“These live-aboards aren’t insured,” he said. “So they just sail away and leave the mess. Somebody should do something about it, and I realised that somebody is me.”

Mr. Lavezzi said the three boats nearest to Aragorn’s Studio are scheduled to be moved “allegedly next week.”

In January, Smiths Gore, the real estate agency that represents the owners of the land on Beef Island, filed paperwork with the Virgin Islands Shipping Registry to claim that the three boats were obstructing commerce, and the government issued a Report of Wreck for each of them. In March, the government invited sealed bids for the vessels.

“I’m not about politics: Just move it, simple as that,” Mr. Lavezzi said.
However, even if the boats are moved, that would leave mountains of junk covering the beach.

“It isn’t really about money anyway,” he said. “It’s just about getting people out here to help.”

Mr. Lavezzi’s first act was to set up a GoFundMe page. He raised $500, which went to buy tools and wheelbarrows.

“Two were stolen yesterday,” he said, but he’s continued on.

Initially, it was all his own effort.

“The skip down here is massive,” he said of the harbour’s trash bin. “I moved tons and tons of stuff.”

He knew he needed more help. One of the roughly three dozen volunteers Sunday was Dinelle Henley of Events United, who already has organised several cleanups in Cane Garden Bay, Crabbe Lot and Long Bush. She said she welcomed the chance to team up with Mr. Lavezzi.

“He’s been cleaning up since Christmas on his own,” Ms. Henley said, “and I like, ‘What? You’re doing this alone? Let me see if I can get some people together and help.’”

She reached out to her friends and relatives, some of whom were looking for community service projects.

Adding to the day’s manpower were workers from the Scottish Prison Service, temporarily based at Balsam Ghut, who helped tackle a massive pile of boat parts, cement blocks and splintered wood that lay next to Aragorn’s Studio.

Working with other volunteers, they loaded the garbage into the back of a pickup truck to be hauled away. Aragorn Dick-Read, owner of the studio, said that this was the first major group cleanup effort he’s seen in the area.

“One guy came in with a machine, but he only got halfway through,” he said. “This is full-on. We’re making a start of it.”

Although one day’s cleanup only made a dent, the effort should make for a cleaner beach ahead of this month’s Full Moon Party on Tuesday.

In fact, volunteers broke up much of the scrapwood and formed an assembly line to refill the metal “fireballs.” Nearby, parents, teens and children from the BVI Womblies roamed the beach with sharp sticks, poking holes in plastic bottles and cans.

Millie Jaspert, the wife of Governor Gus Jaspert, was on hand with her two children, picking nails out of the fire pit. She held up a bowl containing hundreds of nails they’d already found.

“There are still a lot left to go, as you can see,” she said.

Ms. Lavezzi, who cooked a barbecue meal for the volunteers, said she isn’t judging anyone for the mess.

“It’s sad, but I could understand it, because obviously people have got homes to look after. [But] it would be nice to see the bay full again,” she said. “It was a pretty special place before this.”