Sailors undaunted by lack of wind at Spring Regatta

Some sailors may have lamented the lack of wind on Saturday that led to the cancellation of a whole day of racing in the BVI Spring Regatta, but the Escaped …

END_OF_DOCUMENT_TOKEN_TO_BE_REPLACED 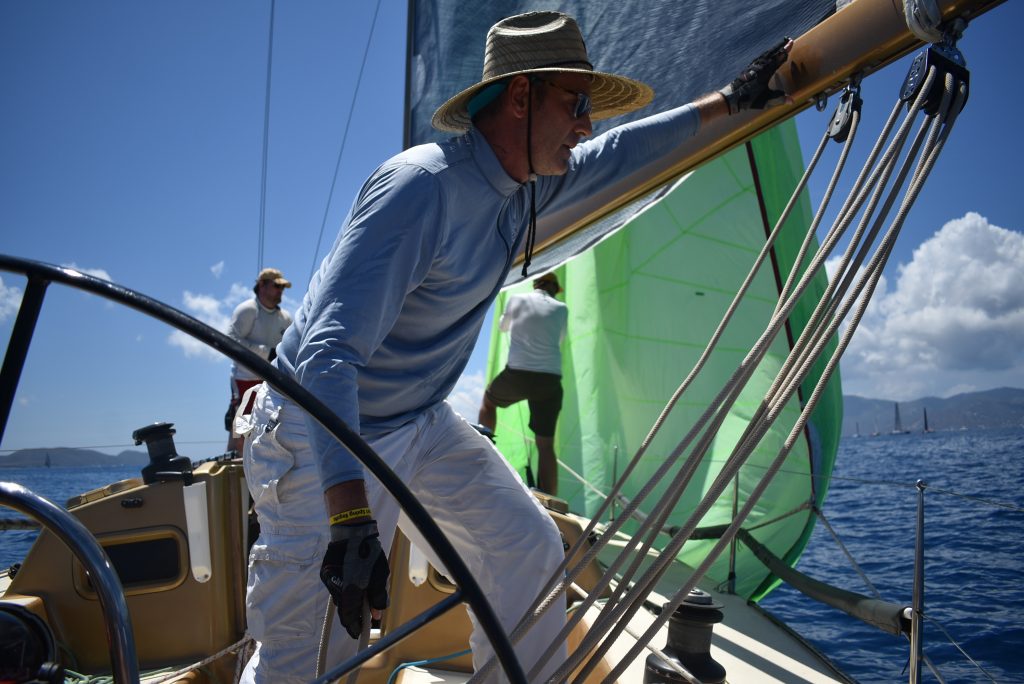 The Escaped Aussies struggle to catch wind in their spinnaker on the final racing day of the 48th Annual BVI Spring Regatta.

Some sailors may have lamented the lack of wind on Saturday that led to the cancellation of a whole day of racing in the BVI Spring Regatta, but the Escaped Aussies team took the opportunity to enjoy the pool at their villa over-looking Smugglers Cove.

“This is actually our only day off,” said Brett Bonthron, one of the crew members.

He and his teammates relaxed, grilled and headed back toward the Regatta Village dressed in white for the Absolut party that night before gearing up for a day of racing on Sunday.

But the winds were quiet on the final racing day as well, barely reaching up to five knots all day. The crew struggled to catch wind in their sails as they returned to the finish line.

The week of sailing, however, had started off with a bang: The Round Tortola Race on March 26 saw winds up to 21 knots. The first boat came back to the Regatta Village in just under two hours.

The next day, the Scrub Island Invitational saw a 42-strong fleet race from Nanny Cay.

But over the week, winds died down to a whisper. The first ever Mount Gay Race Day on Friday saw six to seven knots. By 10 a.m. on Saturday, it was announced that races were cancelled for the day since there was no wind.

“We play with the wind, and sometimes the wind plays with us,” said Cali Sanmartin, manager of gunboat My Cat, on Saturday. “We’ll just keep more ice for the drinks.”

Mr. Sanmartin and his crew took the day off on Saturday to check the boat and have it ready for Sunday. Mr. Sanmartin has sailed all over the world, even participating in the Barcelona World Race, during which he traversed the globe in 132 days with just one other crew member. It was his first time in the BVI Spring Regatta, which he said was “an amazing regatta” with a “nice fleet.”

His was one of 91 boats that registered for the regatta — a record-breaking number for the annual race that began in 1972.

“It was thrilling to see this place buzzing again,” Miles Sutherland-Pilch, general manager of Nanny Cay Marina, said after the event. “It’s been incredible to be part of the BVI rebuild.”

Regatta Director Judy Petz said the entire regatta went “extremely well” in spite of the lack of wind on some days.

“It was a good call by the race committee and I’m glad they called it early because some people got to enjoy the BVI,” Ms. Petz said of the Saturday cancellation.

Ninety-one boats with more than 800 sailors, their friends and families still enjoyed their time off. Some went surfing at Josiahs Bay, some went to Cooper Island and other sister islands, and some just hung around Nanny Cay.
Cancelling a full day of racing has happened before, but not very often. As far as Ms. Petz remembers, there may have been one other day in the last decade.

“You can plan everything but it’s up to God how the wind blows,” she said. What’s interesting, she added, is that many people can sail well in higher wind speed, but it’s the light wind where experienced sailors often shine most.

On the land, events throughout the week were a hit, according to the director. Attendance Friday, Saturday and Sunday nights was noteworthy, Ms. Petz recalled. She attributed the success to the Nanny Cay venue, and to the new stage built there this year.

“I think the new stage adds another dimension to the whole village,” she said. The stage is expected to be there for years to come, and Ms. Petz and other organisers are already working on the Spring Regattas of 2020 and 2021.

“It takes a lot to bring people here,” Ms. Petz explained. “They plan years in advance to come sometimes.”

This is why the committee is already marketing the event worldwide in hopes of a bigger and better turnout next year.

For the Escaped Aussies, participating in the regatta was less about winning the races and more about strengthening their bond and giving back to the Virgin Islands.

The team formed in 2000, and it consisted of a group of friends who lived and worked in Australia for four years together. When trying to figure out a way to keep in touch and remain close friends, they decided to sail together in regattas all over the world. Nineteen of them, to be exact.

The Escaped Aussies organised a charity named SailStrong, giving back to various causes wherever they sail.

“It really changed after Mexico,” said Keiran Duck, a crew member who attended the BVI Spring Regatta. He described the Mexorc Regatta out of Puerto Vallarta that the crew sailed while raising money for an orphanage.

When they asked the nuns who ran the orphanage what was needed,the nuns gave them a list of items that many people may take for granted, such as shampoo and soap. They crew raised $3,000 and they returned to the orphanage with goods for the children.

“I remember giving a watermelon to a child and just seeing the look on his face,” said Mr. Duck.

The Escaped Aussies have seen first-hand the juxtaposition of the wealth in sailing communities versus the poverty in many sailing destinations.

Here, the Escaped Aussies reached out to the regatta committee and asked which charities in the territory need the most help. They chose the Family Support Network and VI Search and Rescue.