Flames roared into the sky on Saturday night as traditional hymns filled the atmosphere with messages of faith and Christianity. As part of a month-long celebration of culture and traditions, …

END_OF_DOCUMENT_TOKEN_TO_BE_REPLACED 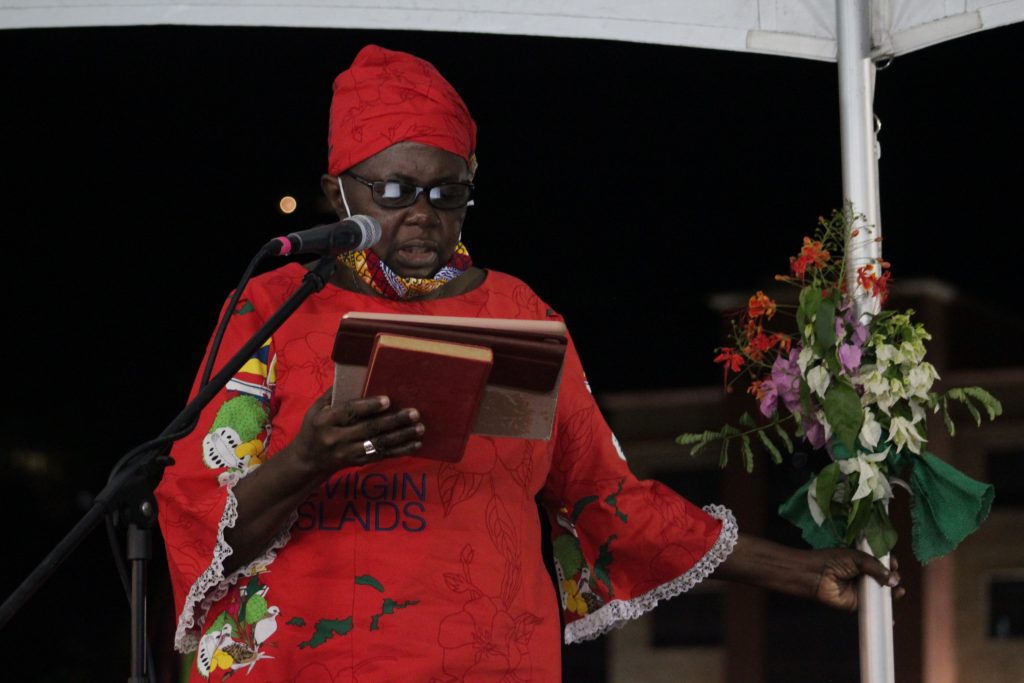 Flames roared into the sky on Saturday night as traditional hymns filled the atmosphere with messages of faith and Christianity.

As part of a month-long celebration of culture and traditions, the Virgin Islands Communal Association hosted a bonfire at the Festival Village Grounds, where hundreds gathered to join the festivities, many carrying a red book of hymns.

“This is what we’re talking about, this red book,” Ethlyn Rhymer said when she took the stage during the beginning of the ceremony. “The same red book here, it contains 1,200 hymns. It is a collection of hymns by Ira David Sankey and Dwight Moody. Together these men compiled Christian songs and they travelled throughout the United States.”

Mr. Sankey was an American singer and spiritual leader who conducted evangelistic tours in the US and United Kingdom along with Mr. Moody starting in 1873, according to the online Moody Bible Institute archives.

“[Mr. Sankey] set the poetry of others to simple music, often drawing heavily on popular tunes and rhythms,” the website explains. “Occasionally Sankey did write his own lyrics, but more often he popularised the works of others. His gospel songs were always easy to learn and sing, and he used them effectively to enhance Moody’s messages.”

The songs became popular throughout the US and UK, eventually making their way to the Caribbean, including the Virgin Islands.

During the cultural celebration on Saturday, Ms. Rhymer said she learned Sankey songs while growing up in Cane Garden Bay and attending the Methodist Church. She recalled attending week-long meetings in the 1960s and 1970s and witnessing people “thrash about as they sang.” Back then, she didn’t know what the Holy Spirit was, she said, but now she understands that “it is real.”

She added that the red book of Sankey hymns is “a part of our culture” and “should be used” in church services.

During the Saturday event at the Festival Village Grounds — where people began arriving at around 5 p.m. — a large white tent was set up with a stage and chairs with seats reserved for musicians.

On the outskirts of the tent were pieces of artwork created by local artist Jehiah Maduro; traditional VI household items brought by Moviene Fahie; roasted corn and other refreshments; and a stack of wooden pallets for the purpose of lighting a bonfire later in the evening.

“We had to find a lot of historical facts … and this is what we came up with,” she said before performing.

The verses included allusions to well-known VI songs and references to culinary staples like fungi and fish. Though Ms. Smith began singing a cappella, she eventually was joined by band members and the audience for the chorus.

Shortly after the song, Janice Stoutt, who the VICA has dubbed a “cultural icon,” shared stories and sang a song as she encouraged people to get up and move about.

“As Africans, we cannot take the music out of us. When our ancestors assembled in cottage meetings, they had a lot of shinding going on,” she said, using local dialect to explain that dancing came naturally to the territory’s ancestors. “The people in the cottage meeting, that was a chance for them to express themselves.”

Around this time, organisers lit a large bonfire a few yards away from the congregation.

Storytelling, standup comedy, poetry, and pole plaiting were also on the programme during the evening, followed by performances by the Heritage Dancers, moko jumbies, and more.

The prior day, a cultural food fair and school arts festival took place at the Noel Lloyd Positive Action Movement Park. Students from several schools shared poetry, dances, and showcases celebrating culture and tradition while traditional foods were on sale.