Supporters of the BVI Humane Society came out to Nanny Cay on Friday night for the annual Minced Pies and Mulled Wine fundraising event. With donated minced pies and mulled …

END_OF_DOCUMENT_TOKEN_TO_BE_REPLACED 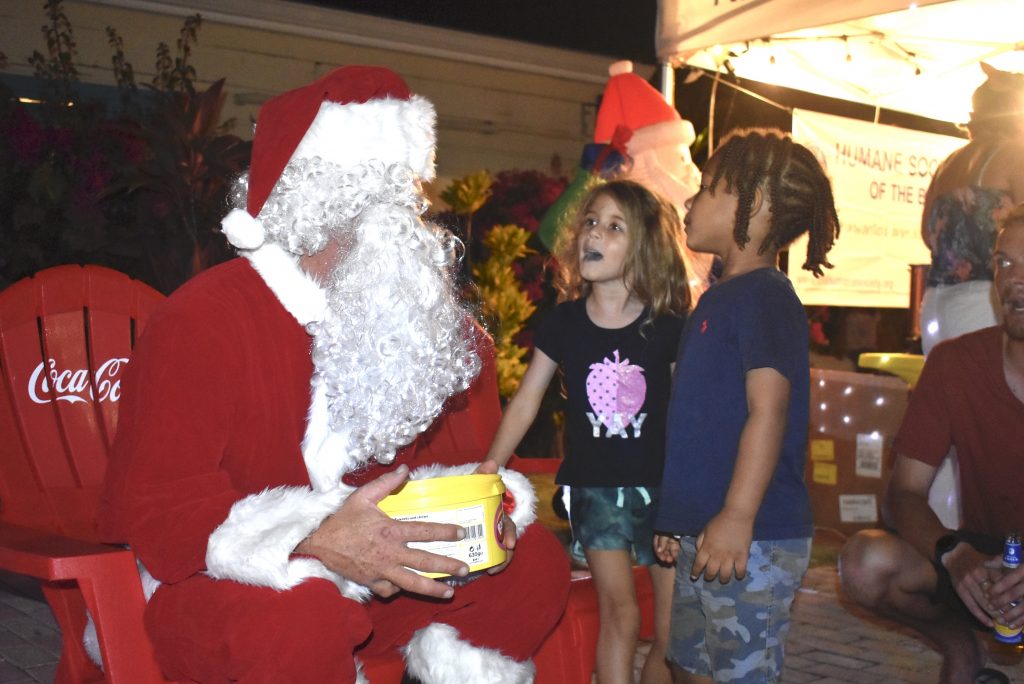 Supporters of the BVI Humane Society came out to Nanny Cay on Friday night for the annual Minced Pies and Mulled Wine fundraising event.

With donated minced pies and mulled wine for purchase, and donations from attendees, the Humane Society raised a little over $4,000 that night.

“Everything will go toward running the shelter for the rest of the year and the years to come,” said shelter manager Vijay Bissoondutt.

This year, Santa showed up around 7 p.m. and children lined up to ask him for presents. They also filled out letters to Santa that were dropped in a mailbox.

In a white tent set up near Peg Leg’s restaurant, the Humane Society sold shirts and other merchandise to ramp up fundraising efforts.

A musical performance by students at Carol’s Music School kicked off the night with renditions of “Twinkle, Twinkle, Little Star” and other favourites. The event was sponsored by Nanny Cay, Mr. Bissoondutt said.

The fundraiser is one of the few that the Humane Society was able to put on this year.

Usually the shelter — which runs solely on donations — looks to Gaming Night to raise a significant amount to support its operations. In 2019, it raised $55,000 in a single night.

But since Covid-19 hit, fundraising has been difficult.

“We’ve been trying to do small fundraising just to get income coming in,” Mr. Bissoondutt said. “We lost a lot of income because we didn’t do our gaming night. That’s one of our biggest events. We bring in enough money [from that] to keep the shelter functioning throughout the year.”

As the pandemic has affected the community over the past two years, the shelter has noticed that people haven’t been as generous with donations.

The shelter is still in a leased facility that spans a third of an acre and is currently overcapacity.

“We always overtake what our capacity could actually hold,” Mr. Bissoondutt said. “There has been an influx of animals coming to the shelter during [the pandemic].”

With people leaving the territory at faster rates and others downsizing their homes due to financial constraints, animals are left at the shelter to find their next home.

While puppies are often able to find new homes through the Humane Society’s partnership with Paw BVI, larger adult dogs are often left behind. Paw BVI, however, sends the smaller dogs to homes overseas through its Animals with Wings programme.

The Humane Society purchased an acre of land in Josiahs Bay in 2015 and started work on a shelter there. But when Hurricane Irma hit in 2017, the facility was destroyed.
Whatever money the shelter saved up until that point was put into restoring the existing shelter in Johnsons Ghut.

“We were hoping to start breaking ground in early 2020: Then we got hit with the pandemic and that was a setback,” Mr. Bissoondutt said. “We have to go back to the drawing board and make a few changes.”

The organisation specialises in animal welfare and responds to situations to help animals in distress. The shelter, however, doesn’t have the authority to respond to many calls of neglected animals.

“We don’t have the ability to remove an animal if it’s being neglected or abused un- less it’s approved by the owner,” Mr. Bissoondutt said. “If there are animals in dis- tress, we will try to assist and help them.”

He said the Humane Society is working with government to advocate for stronger legislation designed to deter animal cruelty. Mr. Bissoondutt added that there are laws in place, but they aren’t typically enforced.

The shelter offers microchipping, boarding, grooming and bathing. Stray animals taken there are rehabilitated: First, they are taken to a veterinarian for examinations; then they are neutered or spayed before being put up for adoption.