Although samples of whale tissues have been collected to try to determine the cause of a mass stranding on July 2 in Anegada, they may not give a definitive answer, …

END_OF_DOCUMENT_TOKEN_TO_BE_REPLACED 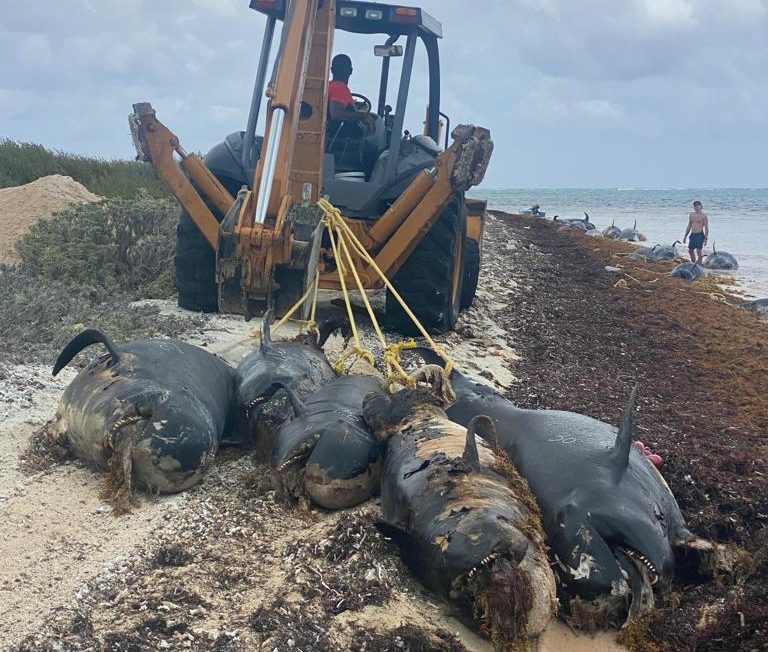 An excavator pulls pilot whale carcasses across Anegada after a mass stranding left more than 50 of the mammals dead along the shores and in the water this month. (Photo: BEYOND THE REEF)

Although samples of whale tissues have been collected to try to determine the cause of a mass stranding on July 2 in Anegada, they may not give a definitive answer, Association of Reef Keepers Managing Director Dr. Shannon Gore said on Monday.

Dr. Gore collected samples on July 4 and said that specialist Dr. Antonio Mignucci from the Caribbean Stranding Network in Puerto Rico will come to pick them up.

“Chances are [the Caribbean Stranding Network] may never find out what happened,” Dr. Gore said. “[Strand- ings] are common if there’s any kind of [military] blasting or acoustics going on that disrupt [the whales’] echolocation.”

Though community members expressed concerns over a survey ship that has been mapping the seafloor in recent weeks, Dr. Gore said the ship wouldn’t have caused the stranding. A more likely culprit is the shallow waters and complex reefs around Anegada, which may have combined with shifting shoals of sand and strong currents — factors that have caused pilot whales to strand recently in other places including Cape Cod, Massachusetts.

More than 50 pilot whales were found dead or dying along the shores of Anegada and in the shallow mangroves earlier this month. Though volunteers gathered the next day managed to rescue two whales, the rest perished and were buried last week, according to Chris Juredin, founder of the Virgin Islands-based non-profit Beyond the Reef International.

“I buried 38 whales [last] Monday or Tuesday, then we subsequently buried another five this week that showed up inside the mangrove systems,” Mr. Juredin said. “The total is over 50 now; it’s either 52 or 54 that we’ve disposed of.”

Government officials, after assessing the situation on July 4, decided to bury the whales in order to keep the waters around eastern Anegada safe for fishers and tourists.

“That site is where people dive for conchs,” Mr. Juredin said. “There were sharks everywhere when we were burying them.”

He added that an excavator was used to bury the whales.

“We ran behind dunes and between the ponds and made sure we didn’t roll over any turtle nesting areas,” he noted.“We broke down twice and overheated twice.”

Dr. Gore said she learned about the whales on Anegada when someone showed her a video of whales swimming near the island on July 1.

“I thought they would strand, because that’s not where they’re supposed to be,” she explained. “I’ve seen strandings before but not to that extent.”

She recalled a similar whale stranding in the 1990s, when at least a dozen whales were beached in Anegada.

Once she was aware of the stranding this month, she gathered supplies to collect samples, including ethanol donated by local distillery BVI Gin. Dr. Gore made her way to Anegada two days after the initial stranding sighting and began collecting samples.

“For each whale, we gave it a number, measured it, [determined its sex], took a sample of the dorsal fin and two teeth from the lower jaw of 36 whales,” she said. “We were able to get measurements from 38 whales.”

Meanwhile, she told volunteers that they could rescue any living whales if they were able to, but to remain wary. “We don’t have marine mammal stranding specialists or scientists here, so who’s to say if it’s a healthy whale or not,” she explained. “You could be pulling a sick one back out or injuring it even more.”

The Beyond the Reef team managed to free two pilot whales during their efforts on July 3, they announced. Now, nonprofit organisations, government ministries, and other residents are coming together to create a stranding network within the territory.

“We have enough to warrant a stranding response team for marine mammals, sea turtles, sea birds, etcetera,” said Deputy Chief Conservation and Fisheries Officer Mervin Hastings. “Nothing has been set yet.”

Dr. Gore added that with a stranding network, action can be taken more quickly in the future. For now, she gave a word of advice.

“If anyone sees whales on the inside of the reef, contact someone immediately, because that’s not where they belong,” she said.