After three false starts that drew ire from residents and tourists alike, Virgin Islands seaports reopened to international ferries on April 15 following a 13-month closure due to the Covid-19 …

END_OF_DOCUMENT_TOKEN_TO_BE_REPLACED 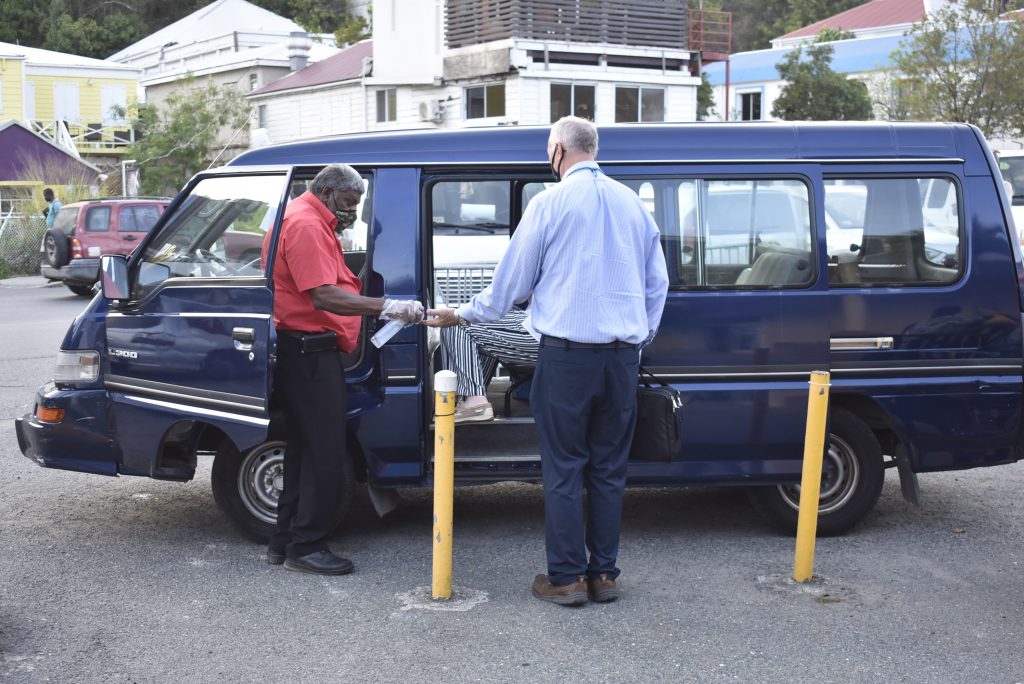 A passenger sanitises his hands as he boards a taxi after taking the Bomba Charger on Monday from St. Thomas to the Road Town ferry terminal. The facility started admitting international visitors on April 15 after shutting them out for more than a year due to the pandemic. (Photo: JOEY WALDINGER)

After three false starts that drew ire from residents and tourists alike, Virgin Islands seaports reopened to international ferries on April 15 following a 13-month closure due to the Covid-19 pandemic.

The reopening came on the last day of the tourism season, but in the House of Assembly Premier Andrew Fahie hailed the measure and other initiatives as evidence that brighter days lie ahead for the struggling marine industry.

On Friday, Mr. Fahie doubled down, proclaiming that the entire VI economy is soon to enter “overdrive” during a growth period buoyed by increased investment in tourism and other established industries as well as new initiatives such as medical marijuana businesses and open satellite campuses for international medical schools.

But with roundtrip visits to St. Thomas costing more than $500 including testing and travel fees, at least one ferry operator has had trouble filling seats, and she sees little reprieve for her struggling business as ongoing travel restrictions discourage the visitors on which her business relies.

“I’m very worried about how this looks for the VI,” said Marjorie Smith, one of the owners of Smith’s Ferry Services. “At the end of the day, they’re making it so expensive for people to travel to the VI.”

Though she said the price of doing business has been rising for years — she offered as an example the $4,000 cost to register the Bomba Charger in the territory — the pandemic shutdowns forced the business to effectively go dormant.

It is now starting to wake up, but she said the process has been very slow.

As a social distancing precaution, government set a limit of 50 people allowed on international ferries, but Ms. Smith said she has yet to book a ferry with more than 20 passengers.

To keep the business afloat, she has been forced to hike ticket prices to $100 one-way, but when the various testing, departure and ports fees are added in, the cost rises to about $565 for a round-trip to St. Thomas, she told the Beacon.

Thanks to the pandemic, the days of selling roughly $60 round-trip tickets are probably over, but if the territory “throws the door open” by June — when Mr. Fahie has said he plans a full reopening — she hopes to offer a $75 roundtrip rate, she said.

In his speech during the April 15 HOA meeting, Mr. Fahie pointed to a slew of initiatives intended to ease the burden on marine-based businesses like Ms. Smith’s, including an extension in the reduction of licensing fees until October and new protocols that welcomed mega yachts back to VI shores in November.

He also has set his sights on welcoming back the cruise industry, saying that his administration is championing amendments to the Cruising and Home Port Permit Act that will allow cruises to be based in the VI.

As the seaports reopen to international travel, known active cases of Covid-19 fell by more than half last week before rising again.

As of April 15, the number of cases had dropped from 10 to four, according to the territory’s Covid-19 Dashboard.

But by Tuesday, the numbers were back up to 10again, with five cases on vessels and five on Tortola.

Meanwhile, the effort to reach herd immunity through inoculation continues, and health officials are still giving jabs to anyone who wants them.

By Tuesday, 9,375 first doses and 98 second doses of the AstraZeneca vaccine had been administered, according to the Ministry of Health and Social Development.

But health officials have cautioned in recent weeks that public interest in taking the vaccine appears to be waning, and the stockpile donated to the VI may soon expire.

On April 14, Medical Officer Dr. Ronald Georges declined to say how many doses might expire next month, but according to Friday’s MHSD press release, government is working “to fully vaccinate17,000 qualifying adults before the shelf life expires.”

On Monday afternoon, the vaccination centre at the St. William’s Catholic Church in Road Town was nearly deserted, though on her way out Jana Barry said she “was thinking about her family” when she decided to get vaccinated.

Though she had heard that international health officials had linked a very rare blood-clotting condition to the vaccine, she said she wasn’t concerned about taking it herself and hadn’t experienced any adverse effects so far.

Rita Godfrey-Delville, who has diabetes and hypertension, had no qualms about taking the vaccine, and she reported no negative effects.

Ms. Godfrey-Delville, who runs Rita’s Restaurant out of  the back of her car, was hopeful that the government will achieve its goal of vaccinating 70-80 percent of the population, although she suspects some people are waiting to see the impacts on others who have already taken the jab. “Some people have doubts and some people have all kind of talk about it,” said Ms. Godfrey-Delville, adding, “At the end of the day, life is a risk, life is a chance, and if you don’t take them, how are you gonna know if you will be okay?”