Yacht Shots photographer Dan States depends on a dinghy to get back and forth between his home on Great Camanoe Island and Trellis Bay. But lately, he’s been finding it …

END_OF_DOCUMENT_TOKEN_TO_BE_REPLACED 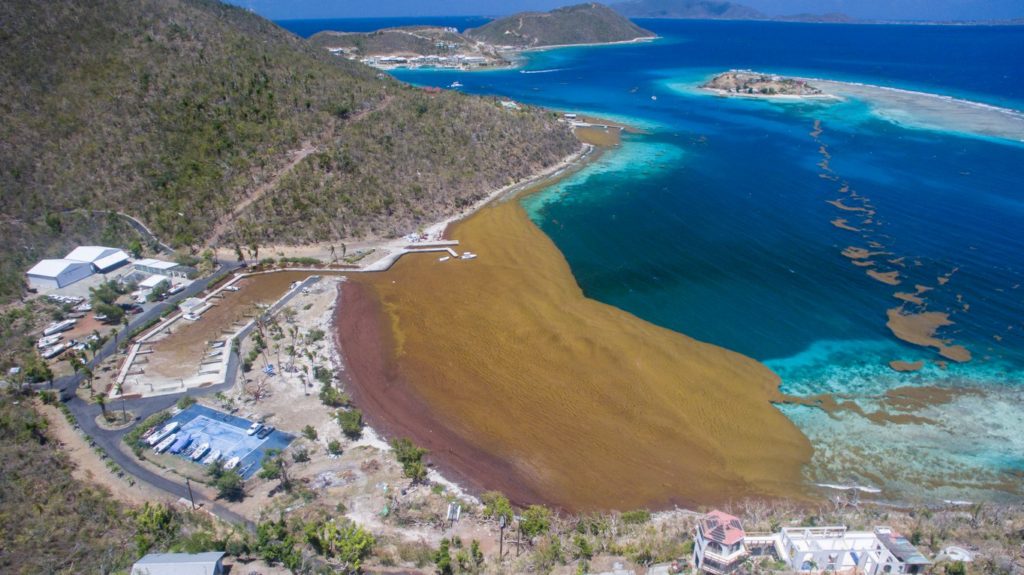 Massive amounts of sargassum have accumulated near Great Camanoe Island (above) and other shorelines. (Photo: YACHT SHOTS BVI)

Yacht Shots photographer Dan States depends on a dinghy to get back and forth between his home on Great Camanoe Island and Trellis Bay.

But lately, he’s been finding it a much smellier and more difficult trip, thanks to the decaying sargassum seaweed that’s clogging the propellers and sending up a sulphurous stench on beaches.

“This is the worst I’ve seen,” he said. “It gets tangled in the propeller and makes it hard to navigate through,” he said. “And we definitely get the smell too.”

Still, as long it seems to be affecting only a small number of residents he doesn’t expect much to be done about it.

“It’s only affecting those of us who live around here,” he said.

Meanwhile, at Nanny Cay, General Manager Miles Sutherland-Pilch has taken the problem into his own hands.

“It’s certainly not easy,” he said. “It wants to go wherever you don’t want it. What we try to do is keep it moving more than anything, [because] once it dies is when it starts smelling.”

The staff at Nanny Cay uses various tools to keep the weed moving, including sweeping it along with booms and running small boats in the outer marina that keep it agitated.

Mr. Sutherland-Pilch added that the weed can also get sucked up into boats’ air conditioners and other systems.

“These are cooled with salt water, so they’re pulling water up from the sea and the strainers are getting plugged,” he said.

This time of year, much of the territory’s coast often is affected by sargassum, a type of floating algae that takes its name from the Sargasso Sea, a region in the North Atlantic Ocean.

Sargassum is common on tropical beaches worldwide, and undergoes seasonal cycles of growth and decay. Scientists think that the current influx of the seaweed in the region is derived from large blooms off the Brazilian coast.

He added that high water temperatures likely play a role, as do nutrients in the water from people releasing more fertiliser into the oceans.

According to a March 1 report by the University of South Florida Optical Oceanography Lab, January and February showed the largest bloom in the central West Atlantic when compared to that period measured in previous years.

“Therefore, there is a high chance that 2018 will be another major bloom year for the Caribbean,” the report read.

According to Mervin Hastings, acting deputy chief conservation and fisheries officer, sargassum has become a routine fact of life in the Virgin islands each spring and summer.

“You’re going to get sargassum every single year. The main negative is the smell when it’s decomposing,” he said, adding that the chemical that causes the stench, hydrogen sulphide, can irritate sensitive noses.

Mr. Petrovic recalls that a few years ago, residents near Sea Cows Bay were so overwhelmed by the odour that it was even permeating their laundry.

However, despite such concerns, Mr. Hastings said it is important to remember that sargassum has its uses. Before it decomposes, clumps of the weed provide a floating nursery for move than 120 species of fish, turtles and invertebrates, and prevent coastal erosion in the same way as mangroves, he explained.

That’s why he said that it doesn’t pay to clean the sargassum as soon it appears, as that could mean disturbing the homes of young marine life.

So even though the influx might have people thinking about organising cleaning efforts, he advises against it for now.

“Usually I only recommend major cleanups if it’s impeding ferries and boats coming in and out,” he said. “If it gets to be that thick, then you want to clean up to prevent damage.”

But cleanups too early are often a waste of time, according to Mr. Hastings. “You can spend a lot of money and then you can go back the next morning and more is there,” he said.

Plus, Mr. Petrovic added, “A certain amount of sargassum is natural and actually good for beaches. Cleanup can be expensive and damaging to the environment. Backhoes can destroy turtle nesting beaches and crush the eggs.”

The cost of removal is also high.

“The bottom line is it’s an economic question,” he said. “You can get rid of the sargassum, but what’s it going to cost you?”

When it does get collected, the seaweed can be turned into fertiliser and mulch.

“[But] on a small island, disposing on land large quantities of sargassum can be a problem,” Mr. Petrovic said. “Scientists and marine biologists will be working on it.”

He suggested that one solution might be to “scoop it up on a barge or something, like a kitchen garbage disposal. Take the sargassum and liquefy it and pump it out to sea where it could disperse.”

In the meantime, the weed still presents a pungent nuisance for residents and visitors alike.

“It likely is going to become an annual event — we have not reached peak,” Mr. Petrovic said. “Most people predict that the quantities will increase. If tourism is going to survive this onslaught of sargassum, we’re going to have to find ways of dealing with it, scooping it up, fertiliser, making various products with it.”

He added that with government overwhelmed and underfunded, especially after Hurricane Irma, the solution will likely lie in the private sector.

Sir Richard Branson had the same idea. In March 2016, he invited private and public sector leaders to Mosquito Island to brainstorm possible uses for the seaweed, which included food, fuel and fertiliser.

At the conference, St. Lucia-based Algas Organics demonstrated a way to produce seaweed-based agriculture products, and a French startup called Algopack showed how the plant could be used for bioplastic production.

“But those are all small-scale,” Mr. Petrovic explained.

Until that changes, Mr. Hastings said, “We’re going to have to deal with it; educate people about the uses of sargassum and not to get scared about it.”

Mr. Sutherland-Pilch suspects that the recent influx is just the tip of the sargassum iceberg.

“We used to get bits in the summer from the Sargasso Sea,” he recalled, adding that the current crop is something different — and larger. “I think it’s going to be with us for a very long time.”