Fresh off their diplomatic travels to Europe last month, government leaders explained their progress on planning for the future of environmental management, national security, marijuana legalisation, and greater self-determination. During …

END_OF_DOCUMENT_TOKEN_TO_BE_REPLACED 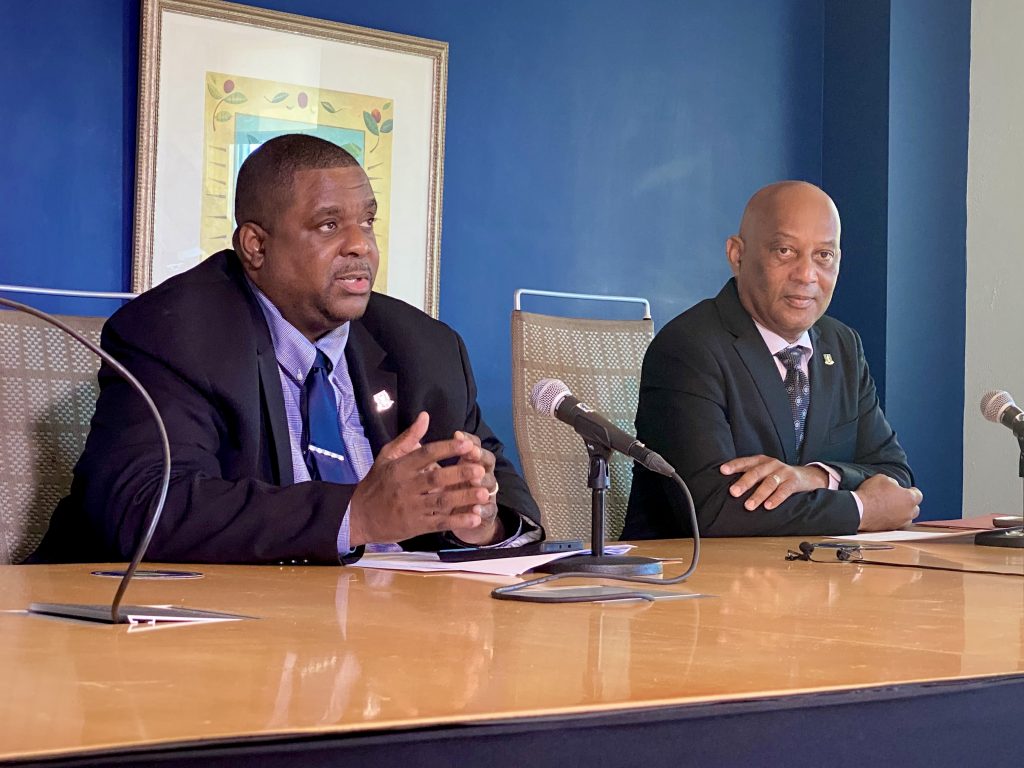 Fresh off their diplomatic travels to Europe last month, government leaders explained their progress on planning for the future of environmental management, national security, marijuana legalisation, and greater self-determination.

During a press conference on Nov. 26, Premier Andrew Fahie and Natural Resources, Labour and Immigration Minister Vincent Wheatley recounted their diplomatic work abroad with the Joint Ministerial Council in London and the 26th Conference of the Parties in Glasgow.

Mr. Fahie said satisfactory progress was made toward re-establishing “a modern partnership” with the United Kingdom, and he credited Governor John Rankin for his professionalism in filling his post since the beginning of the year.

Meetings with Foreign Secretary Elizabeth Truss, Minister for Overseas Territories Amanda Milling, and other UK ministers proved fruitful, according to the premier. He said they discussed the territory’s future, and he stressed the need for a new white paper that better outlines the territory’s partnership with the UK.

The premier said both parties have improvements to make in observing their constitutional responsibilities.

“I believe we can work together constructively to strengthen self-governance in a manner that supports our aspirations for greater self-determination,” Mr. Fahie said.

He added that he remains neutral about pursuing self-determination or independence and said that any decisions about the future leadership of the territory would have to be made by citizens. He did, however, encourage community members to educate themselves about their options.

The subject of self-determination arose when the House of Assembly passed a motion in July 2020 to establish a formal Constitutional Review Committee. The Constitution was last updated in 2007.

“When that constitutional review starts, there will be discussions with the people at all levels, and the people’s voice will be heard,” Mr. Fahie said.

Another area he discussed with UK leaders was legalising marijuana, he added.

The House passed two bills aimed at decriminalising and legalising medical marijuana in the territory in June 2020, but then-Governor Gus Jaspert said the legislation hit a roadblock with UK leadership.

A main concern was transferring licensing responsibilities from the UK’s Home Office to a new authority in the VI that would need to comply with international narcotics regulations.

On Friday, Mr. Fahie said progress is being made.

“I am pleased to report that coming out of our JMC meetings, the UK and BVI have agreed to move forward with discussions on advancing medical marijuana,” he said. “In fact, follow-up meetings have already begun. I look forward to updating you in due course on the progress.”

Given the delay in legalisation, Mr. Fahie said talk has fallen by the wayside with an unnamed potential investor who expressed interest last year. However, the premier was optimistic about the market’s potential once all the structures are in place.

Mr. Fahie said that while medical marijuana has the potential to help diversify the territory’s economy, efforts would need to be made to ensure that national security remains strong.

“As I made clear at the JMC, unfortunately, the region is a transit point for illegal contraband as organised crime seeks to exploit the vulnerabilities of so much open maritime space,” the premier said. “Your government continues to be supportive of the efforts of the governor and police commissioner to strengthen the police force and improve security.”

In the upcoming budget, Mr. Wheatley said the government hopes to include funding for the construction of a new detention centre. He said the current procedure of using hotels and private security to hold detainees during the pandemic is proving “incredibly expensive.”

World leaders focused much of their efforts on addressing the pandemic, Mr. Fahie said. The VI learned what effect mass unemployment has in the community, and he said planning is under way to guard against it.

“We recognise the need for a permanent unemployment scheme to provide a financial and social safety net in the event of a disaster or catastrophic event,” he said on Friday. “We would welcome the UK’s technical input on how to implement this for the Virgin Islands.”

He and Mr. Wheatley said the programme would focus not only on monetary support, but also provide job training for upcoming industries so Virgin Islanders are in a better position to fulfil entrepreneurial and upper management roles.

Though efforts stagnated during the worst of the pandemic, Mr. Fahie announced his intention to revitalise the “1,000 Jobs in 1,000 Days” initiative designed to match employers to prospective employees with relevant skills and interests.

Asked about current efforts to assess unemployment rates and how they compare to the beginning of the pandemic, Mr. Wheatley said government is exploring ways to keep track of employment for both work-permit holders and belongers through an all-inclusive register.

Considering the territory has spent between $150 million and $200 million on pandemic-related expenses by Mr. Fahie’s calculations, funding for certain programmes and building projects will be tight next year, he said.

Unlike other countries, however, the territory has managed to avoid a large deficit, he said, and spoke to several planned projects, particularly for schools.

“Right now, we have allocated a huge portion of money toward getting educational facilities and the system back up to par,” Mr. Fahie said.

Within the coming weeks, he added, he expects demolition and repair work on the old Elmore Stoutt High School to commence.

“That’s going to cost us quite a bit of penny,” he said, noting that other facilities are awaiting extensive work. “When you weigh that against some of the other areas, it’s a matter now of prioritising.”

Efforts to remove mould from schools throughout the territory are also ongoing, Mr. Fahie said.

In a “radical departure from the norm” at COP 26, Mr. Wheatley noted that five different overseas territories were approved to attend the conference and given greater abilities to collaborate on climate change-related issues.

He said this progress proved especially valuable given their vulnerability to extreme weather events.

Representatives, he added, discussed the best ways to continue making progress on adapting to and mitigating the effects of climate change. OTs explored additional funding avenues that could replace the sources lost after the UK left the European Union.

“The advent of Brexit has presented an unprecedented challenge to overseas territories, as all EU funding and access to markets has been jeopardised,” he said. “The loss of funding is estimated to be in the range of several hundred million over the next few years.”

While in Glasgow, Mr. Wheatley did help negotiate funding for restoring the VI’s mangroves.

He was told that nurseries would have to scale up their efforts for the territory to benefit from “blue carbon” initiatives. The minister said funders expressed interest in the future of mangroves and seagrass grown here.

“They’re very much interested in helping us turn those natural assets into a new economy that can generate income for the BVI,” he said