Seniors from across the territory marched around the A.O. Shirley Recreation Grounds to the beat of a drum on Friday during the Senior Games 2022. Then they kicked off a …

END_OF_DOCUMENT_TOKEN_TO_BE_REPLACED 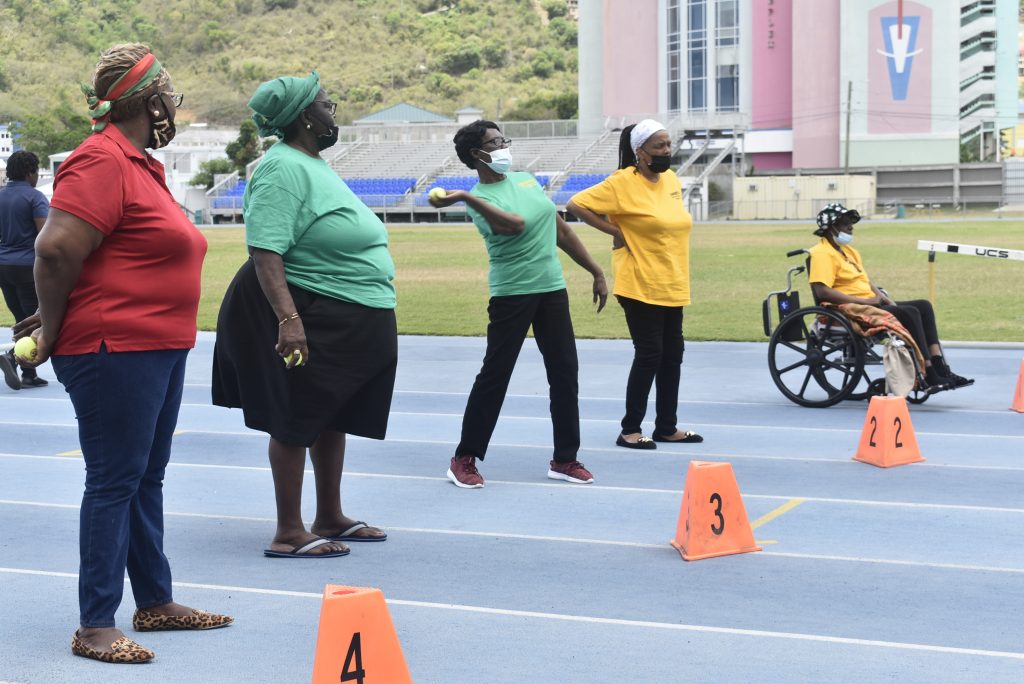 Seniors take part in a game where they throw a ball as far as possible. The activity was one of many during the Sen- ior Games on Friday morning as part of Senior Citizens Month. (Photo: ZARRIN TASNIM AHMED)

Seniors from across the territory marched around the A.O. Shirley Recreation Grounds to the beat of a drum on Friday during the Senior Games 2022.

Then they kicked off a morning of physical activity as they showed off their colours: red for the East End/Long Look Rising Sun team, and yellow and green for the Carrot Bay Senior Engagement Programme team.

All told, about 40 seniors took part in events including a fast walk, a fast run, a lime-and-spoon race, a wheelchair race, a cane race, a fetch-and-carry race, and a “late-for-church” race.

“I think it went well. It was fun,” said organiser Junelle Victor from the Social Development Department.“Carrot Bay seniors, they came out the winners.”

Students from the Althea Scatliffe Strikers Band helped with the march, leading the seniors along the track at the start of the games. Other students led the territorial song.

Newly appointed Health and Social Development Minister Marlon Penn, whose mother-in-law participated in the games, spoke a few words during the event.

“You have my commitment … that there’s sufficient funding to support you, the seniors,” he said. “I just want to say to you, have fun and continue to do your activities.”

Ralstan Henry, president of the BVI Athletics Association, also spoke during the event.

“What we are pushing for is sports for life,” he said. “You are the pillar of where we are today. If it wasn’t for you, we wouldn’t be where we are in sports.”

He promised to make the games bigger in the coming years and to fill the stands with people cheering the seniors on.

The games wrapped up a month of activities for seniors, which also included a church service and a tea party.

“[The games are] kind of our annual event that we usually hold for Senior Citizens Month. Last year it was held in Carrot Bay at one of the senior’s backyard. They had a culture fair as well,” Ms. Victor said. “This year we decided to make it a bit more competitive and fun.”

She added that during 2020 and 2021, the department was unable to host its regularly scheduled events for the annual observance.

“We were quite excited that we were able to have a few activities this year given the circumstances of the past,” Ms. Victor said. “And the seniors themselves enjoyed the events.”