High Speed coach Brian “Bash” Brewley told his team to put the playoff games that they had lost behind them and focus on game four. His Division C team went …

END_OF_DOCUMENT_TOKEN_TO_BE_REPLACED 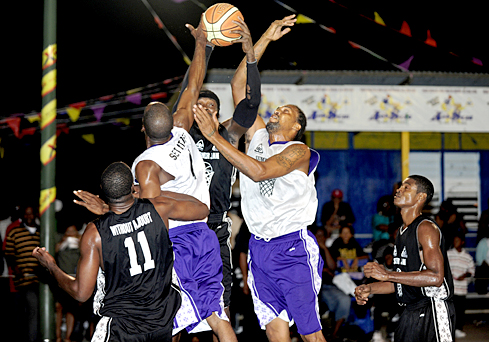 High Speed coach Brian “Bash” Brewley told his team to put the playoff games that they had lost behind them and focus on game four. His Division C team went undefeated in the regular season and was facing elimination from the championship finals two weeks ago.

His advice worked and the team would push the series to a game five.

“We finished the season undefeated and I told them those games don’t count, unless we win,” Mr. Brewley said. “You either win or go home.”

The coach added that Come to Defend was tight competition and didn’t give up throughout the series. His team trailed early in game four, but High Speed managed to come back to win it and keep the series alive. Mr. Brewley said defense helped win the game by playing man-to-man and boxing out.

“We went to the books and changed the defense,” Mr. Brewley said. “And they didn’t adjust to it.”

Come to Defend also struggled at the free throw line and turnovers plagued the team.

With the series tied, the deciding game was played on Saturday night at the Jeffery Caines Memorial Arena in Virgin Gorda. Again, defense would play a pivotal role in securing the championship for the Tortola team.

High Speed walked away with the title after being Come to Defend.

“We tried everything,” Mr. Brewley said. “I put my best defender on their main scorer. Although he had the height advantage, the little man did well.”

Traveling to Virgin Gorda to compete in the league had its challenges, like expenses but the coach said the experience was invaluable for the junior players.

It was Mr. Brewley’s second year coaching in the VG Summer Jam League. He took second place in the C division last year.

“You have to mold the youth,” Mr. Brewley said. “This is who will be the replacements. My main focus is on the youth.”

However, during the Division A championship game Mr. Brewley had an interest in the  senior players. He sat at the scorers’ table giving pointers to Set it Off players in between plays.

The final championship game got under way with Set it Off trailing by as much as 20 points early in the first half. But as the second half started the team cut the lead to 10 points and started its comeback.

With just minutes left in the fourth quarter, rain started to fall and players began slipping on the court. The game would be delayed for more than an hour just as Set if Off took the lead. After the rain passed, organisers and volunteers mopped and squeegeed the court dry. The game would resume shortly after 1 a.m.

Returning to the game was a challenge for the players.

“It was really hard,” Set it Off’s Kitwana Rhymer said. “Your body gets cold and you have to warm up.”

Mr. Rhymer said the night started a little slow, but they continued to focus on defense.

“As a basketball player I know you have your ups and downs,” Mr. Rhymer said. “I had to try to charge myself up in order to charge up the team.”

He said his team’s comeback started when he missed a dunk.

“It charged my teammates and the fans,” Mr. Rhymer said. “I started getting riled up and angry. I didn’t score, but they saw that I was taking action.”

He added that his teammates remained focused and they “combined all the team’s talent as one.”

Set it Off would win the championship, 71-70. It was the team’s fourth championship and its second consecutive title. Winning was important to the team, according to Mr. Rhymer.

“It gives the team more confidence to know that we can achieve something like this — winning a championship back to back,” he said. “It shows perseverance; it shows pride and that we have heart.”

After the game, awards were handed out to division leaders in serveral different categories. (See list to the right.)

The Young Gunners won the B division during the previous week.

Players and coaches will now focus on the league in Tortola, which will start next year.

On Dec. 19-23, the BVI Hoop It Up Foundation will host a Christmas camp with coach Mike Nalls from Delaware on VG and Tortola. For more information call 544-0480.

“It is a very competitive league and we had a lot of fun,” Mr. Brewley said. “I am glad these guys grasped the opportunity to go home with a championship.”