Though the dumpsite fire in Coxheath has become the main air quality concern for residents over the past two months, the Pockwood Pond incinerator has been spewing largely unfiltered gas …

END_OF_DOCUMENT_TOKEN_TO_BE_REPLACED 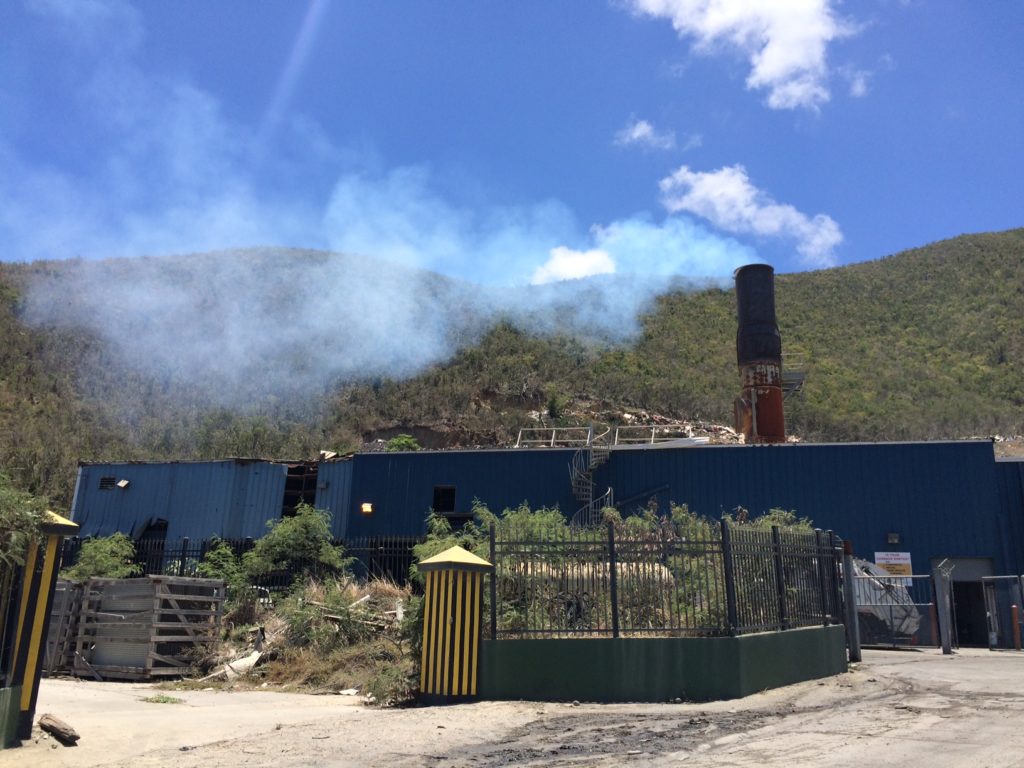 Tortola’s incinerator, which has been operational for seven years, does not have a scrubber to control air pollution. (Photo: AMANDA ULRICH)

Though the dumpsite fire in Coxheath has become the main air quality concern for residents over the past two months, the Pockwood Pond incinerator has been spewing largely unfiltered gas emissions into the sky for the last seven years.

In spite of leaders’ repeated promises, the facility still does not have a scrubber, a standard air-pollution-control device designed to remove particulates and gaseous pollutants from emissions.

Without it, exhaust from the incinerator could currently contain chemicals including dioxins, a type of highly toxic pollutant that can cause reproductive and developmental problems.

Petrona Davies, permanent secretary for the Ministry of Health and Social Development, told the Beacon last week that government signed a roughly $1 million contract with the Virginia-based company Consutech Systems LLC in 2015 to manufacture the device. There will be further costs to install the system and operate it, Ms. Davies added.

But three years later — after government has already sent some $500,000 to Consutech in the form of a deposit and other payments, according to Ms. Davies — there is still no timeline for when the scrubber will be completed, and neither Ms. Davies nor HSD Minister Ronnie Skelton could provide a date for its arrival.

Government officials have pledged for at least a decade that a scrubber system would be installed at the current Pockwood Pond incinerator.

Those officials have also given a wide range of reasons for the scrubber’s delay.

In 2011, for instance, they cited “ongoing land negotiations” and in 2016 they said that government had been busy implementing the new National Health Insurance programme.

“I have no idea. It’s not a quick manufacturing piece of equipment. You can’t just buy it off the shelf, you know,” he said, referring further questions to his permanent secretary.

Ms. Davies explained the delay was not on government’s end, but that Consutech has encountered obstacles in the manufacturing process.

Some of the vendors the firm typically worked with have gone out of business, meaning the company had to find new ones, she said.

“So it has created some challenges,” she said. “But they claim to have overcome those challenges.”

The permanent secretary also used the same terminology as Mr. Skelton to explain the three-year setback, reiterating that the scrubber “can’t be bought off the shelf.”

“It is designed specifically for each case: You have to come up with engineering drawings and create it. If it were that easy to get, we would have gotten it already,” she said.

Nevertheless, Ms. Davies said her ministry is in “constant communication” with Consutech and “continues to press them.”

In the 1990s and early 2000s, open trash burning and spontaneous garbage fires in Pockwood Pond were commonplace, partly because the incinerator at the time couldn’t properly process the large volumes of waste the island was producing.

In 2004, government signed a $4.5 million contract for a new incinerator, and said the facility would likely be up and running within 15 months.

About five years later, the incinerator was installed, but it lacked a scrubber system and didn’t start functioning right away.

In 2009, then-Deputy Premier Dancia Penn, who was also HSD minister at the time, said that getting a scrubber was “absolutely very high” on the government’s agenda.

About two years later, the incinerator came online for the first time, but still without a scrubber. Ms. Davies commented at the time that the system could not be installed until completion of “ongoing land negotiations.”

In 2012, Mr. Skelton announced that manufacturers were preparing to ship the scrubber. It never came.

In March 2016, the minister again promised imminent arrival of the device.

The following month, he told the Beacon that it would be about six to seven months before the scrubber arrived.

He added that the device had been delayed because he had struggled to find funding and, in the midst of tackling the NHI programme, didn’t push for it enough.

In 2015, however, government had approved $1.2 million for the design, manufacture and purchase of the scrubber. In the 2016 budget, another $750,000 was allocated to the project.

Last year, Mr. Skelton had similar comments for the Beacon about the status of the pollution-control device. But this time, he didn’t have a timeline for its arrival at all.

“The process is a little more tedious than just saying: ‘We ordered it; it’s coming,’” he said at the time.