The final emergency shelter list issued for this year looks fairly different than usual: There are fewer shelters included, with no building listed for the Road Town area, and two …

END_OF_DOCUMENT_TOKEN_TO_BE_REPLACED 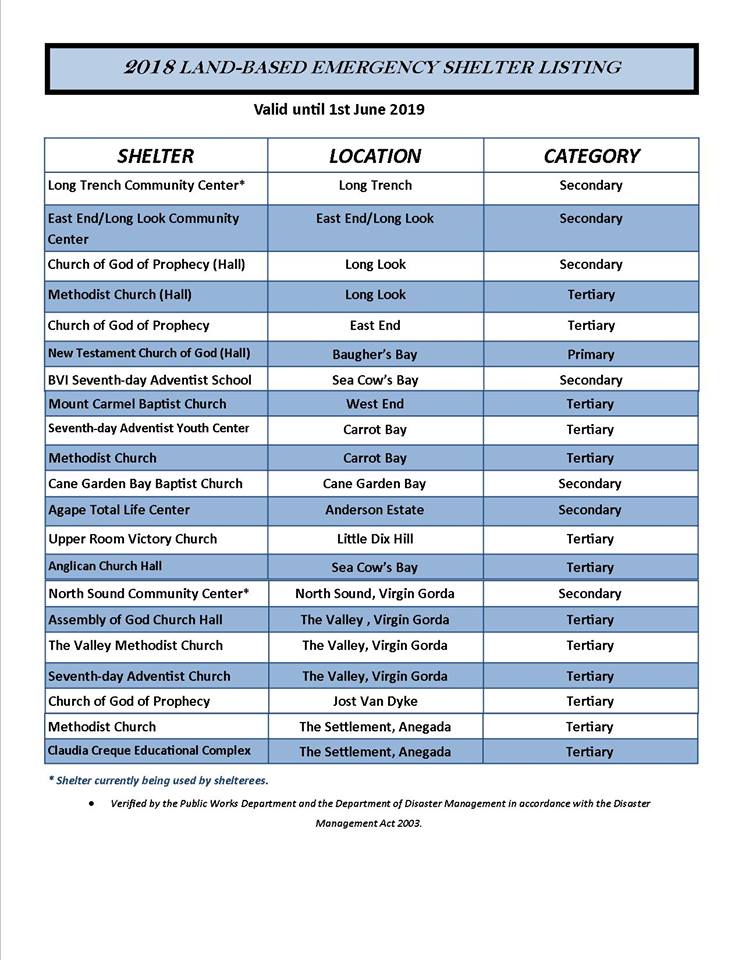 The final emergency shelter list issued for this year looks fairly different than usual: There are fewer shelters included, with no building listed for the Road Town area, and two of the centres are still housing residents who have been homeless since Hurricane Irma.

The Department of Disaster Management, which is responsible for verifying the master list alongside the Public Works Department, released an “interim” listing of shelters in early June that was intended to be valid through July 31.

The new list, however, is the same except for the addition of two more buildings — the Upper Room Victory Church on Little Dix Hill and the Anglican Church Hall in Sea Cows Bay — and the substitution of the Church of God of Prophecy in East End for the East End Seventh-day Adventist Church.

During a meeting of the Standing Finance Committee early this year, DDM Director Sharleen DaBreo told legislators that she hoped the number of designated buildings would remain at 30 or above.

But the final 2018 list includes 21 buildings: one primary shelter, seven secondary shelters
and 13 tertiary locations. According to the 2015 DDM Emergency Shelter Manual, the last category — which is the designation given to more than half of the buildings on the final list — “would generally only be occupied after the [emergency] event.”

Secondary shelters, which are often school buildings, are also supposed to be structurally sound and equipped to provide safe refuge, but do not have all the facilities listed above, the manual explains.

In comparison, the 2017 land-based emergency shelter list featured 30 buildings that could be used in the event of a disaster, including six primary shelters and three located in Road Town.

Ms. DaBreo wrote in a message to the Beacon earlier this month that shelters in Road Town were “not ready” to be put on the list, and that shelter repairs are being conducted through the Ministry of Health and Social Development.

During the FSC meeting in March and April, Ms. DaBreo reported that 13 out of 30 shelters could be usable again this year if some “emergency repairs” were made.

The DDM and the Ministry of Health and Social Development marked the community centres as a priority for that restoration work in 2018, she said.

The cost of basic repairs will come to $281,000, excluding the Brewers Bay Community Centre (included on last year’s list but not for 2018), which would require more than $33,000, the director reported.

However, to bring the damaged buildings to a “build-back-better standard,” almost $1 million more in funding was needed, according to the SFC report.

Ms. DaBreo also said in April that five shelters were specifically recommended for removal from the list: the Seventh-day Adventist Church in Road Town; the Church of God of Prophecy in Hope Hill; the Jost Van Dyke Primary School; the Brewers Bay Community Centre; and the North Sound Methodist Hall on Virgin Gorda.