Deverson Williams, 38, a native of St. Vincent, was shot dead in his car in broad daylight in Fish Bay Tuesday afternoon, the latest casualty in a string of at …

END_OF_DOCUMENT_TOKEN_TO_BE_REPLACED 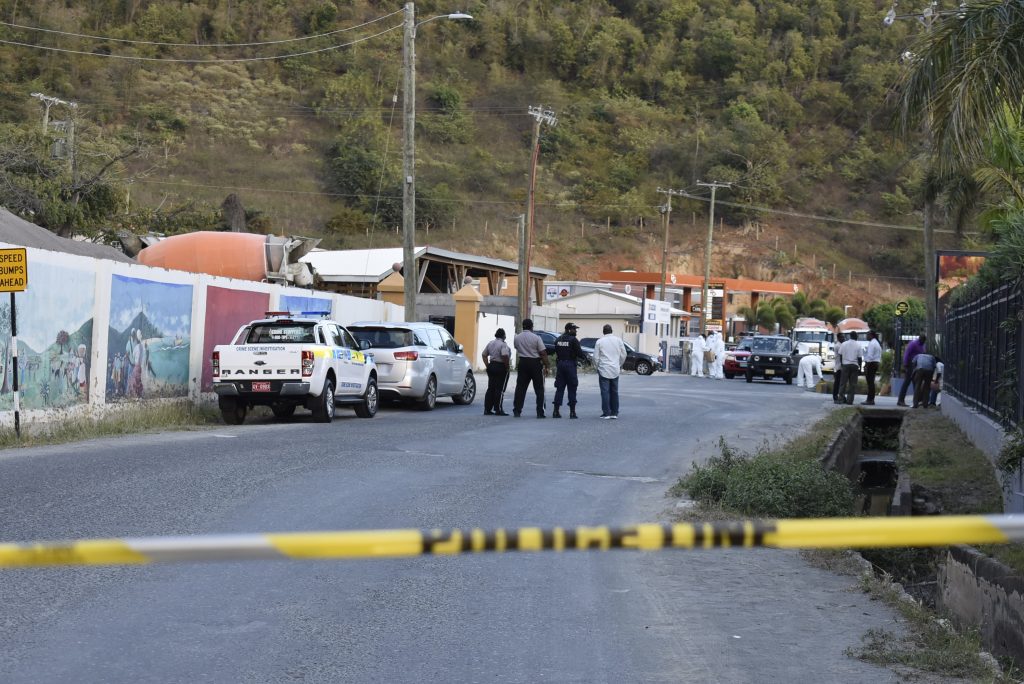 After a man was gunned down in Fish Bay on Tuesday afternoon, police worked behind caution tape to photograph the crime scene while other offices stood ground. The shooting was the fifth violent or unexplained death reported by police since February. (Photo: JOEY WALDINGER)

Deverson Williams, 38, a native of St. Vincent, was shot dead in his car in broad daylight in Fish Bay Tuesday afternoon, the latest casualty in a string of at least five violent or unexplained deaths over the past six weeks.

Police have been tight-lipped about all of these cases. After the Tuesday shooting, which left the victim’s vehicle riddled with bullets and damaged the nearby International Motors building, police executed a search warrant in Tortola, arresting two people and seizing a loaded firearm and ammunition, police announced yesterday.

Images of the deceased slumped over in the driver’s seat of a grey Suzuki jeep began circulating on social media soon after the shooting, but by 6 p.m. police had closed off the road to most through traffic and the business area was quiet as law enforcement officials dressed in white Hazmat suits photographed the crime scene.

Also behind the police tape cordoning off the crime scene, which this reporter was not allowed to pass, investigators in street clothes watched alongside officers in uniform.

One wore a bulletproof vest and carried a gun slung over his shoulder.

Tuesday’s shooting is the latest in a surge of violent deaths that has alarmed residents as four bodies were discovered throughout February.

A woman who lives in Fish Bay but wasn’t home when the Tuesday shooting took place said that the recent violence has reached such a pitch that she has become fearful, especially for the safety of her children.

“Myself and all, we frightened because we don’t know who next tomorrow, who next tonight,” said the Vincentian, who spoke on condition of anonymity, adding, “A lot of things happen and they getting away with it, because police [are] not doing enough.”

Government officials, too, have been shaken by the swelling crime.

During a Tuesday night broadcast on Virgin Islands Party Radio, government ministers denounced the violence, urging unity from the public and promising to address the violence through law enforcement and legislation.

“We need to nip it in the bud: We got to understand what is taking place and the effect it could have on this territory,” Transportation, Works and Utilities Minister Kye Rymer said.

He added the government is planning to introduce legislation that will help accomplish this goal, though he did not name specific laws.

The minister also floated the idea of offering money to anyone who supplies police with information leading to the arrest of the perpetrators.

“Maybe we need some incentives for persons to come forward to say what they know,” Mr. Rymer said.

“As our loved ones continue to reel from one crisis to another, I call on the government of the Virgin Islands and the National Security Council to prioritise the safety of its citizens, and to take strong and urgent action that will act as a deterrent to every element of criminality, ensure our wellbeing, and protect our economy,” Mr. Penn wrote.

While he did not provide specific recommendations for the NSC — which includes Governor John Rankin, Premier Andrew Fahie and Police Com-missioner Michael Matthews — he prodded the government to give police “whatever resources” they need to keep residents safe.

Before the man was gunned down Tuesday afternoon, violent and unexplained deaths pockmarked the month of February.

On Feb. 19 a body floating in the ocean near the Sea Cows Bay Community Centre was identified as Waleid Kacchour.

Though police provided scant information about this death, they said it was being treated as a suspected homicide and that the body’s hands and feet were bound.

Mr. Kacchour’s body was found ten days after Earl “Bob” Hodge was shot and killed in his Hannahs Estate home, and two weeks after Rodney Simmonds Sr. and Andrew Skerrit were found dead in their respective Threadfall and Carrot Bay homes on Feb. 5.

Police initially said homicide detectives responded to the deaths of Mr. Simmonds and Skerrit, but they have not provided further information after that.

On Feb. 24, Ms. Drayton said that the investigations into these three deaths were “very much alive,” but she did not provide any more information, and police have yet to release any additional updates.