During a normal tourism season on Anegada, Liston Potter’s restaurant Potter’s by the Sea is a popular hangout. But like other hospitality businesses, it was shut down by the coronavirus …

END_OF_DOCUMENT_TOKEN_TO_BE_REPLACED 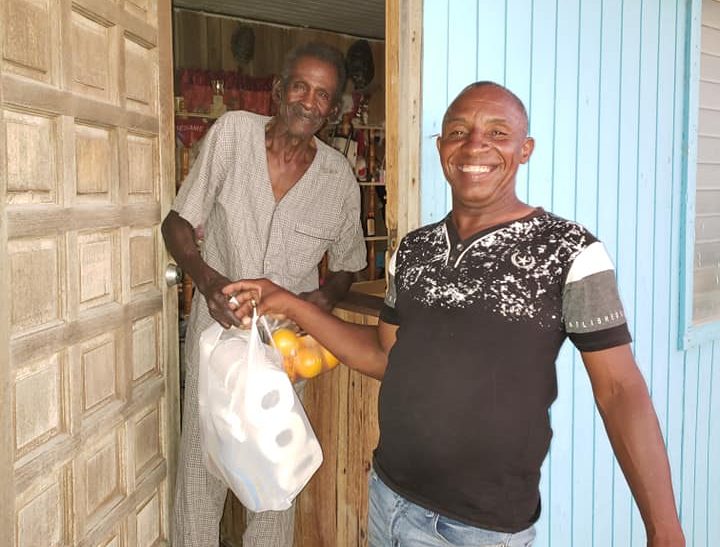 Members of the Anegada Resilience Team, in collaboration with District 9 Representative Vincent Wheatley, distribute essential food supplies to seniors in the community during the Covid-19 curfew. (Photo: PROVIDED)

During a normal tourism season on Anegada, Liston Potter’s restaurant Potter’s by the Sea is a popular hangout.

But like other hospitality businesses, it was shut down by the coronavirus pandemic.

“I never think in my lifetime I will see or experience anything like this,” Mr. Potter told the Beacon, adding, “It is not an easy situation, because many of us have to go back into the old way of living, such as fishing and farming, to make ends meet.”

The pandemic has battered the economy across the territory, but it has dealt a particularly hard blow to the sister islands because of their outside reliance on tourism and their physical distance from Tortola.

Meanwhile, Mr. Potter and other business owners still have to pay their monthly bills, which he said is increasingly difficult in the face of so much uncertainty.

Sister island communities have come together to respond much as they did after the 2017 hurricanes, but their workforces are struggling, according to Natural Resources, Labour and Immigration Minister Vincent Wheatley.

“The economy is primarily tourism based,” Mr. Wheatley (R-D9), the representative for VG and Anegada, told the Beacon. “With our borders being closed, what’s going to happen there? The local economy will have to change a bit.”

As long as resorts remain closed and tourists are banned from visiting the territory, the minister said, unemployment will remain very high in the sister islands.

And even after such businesses reopen, tourism might not recover quickly: Recent reports, he explained, predict that travellers will likely take fewer, but longer, vacations in the future.

Rather than taking three or four trips in a year, for instance, they may take only one or two but spend more time in those locations.

Since the VI has had relatively few lab-confirmed Covid19 cases, he hopes it will be in a good position to be one of those top destinations.

“As a government, our responsibility is to keep the BVI as Covid-free as possible,” he said. “We want to build the reputation as a place that acted quickly and therefore is a safe place.”

BVI Tourism Director Sharon Flax-Brutus, who also lives on VG, said one encouraging sign is that many visitors postponed their travel plans rather than cancelling them outright.

She and Mr. Wheatley agreed that the future probably won’t be easy for the sister islands, but they said recent community efforts help provide a roadmap for the way forward.

On VG, a unified response was key in meeting the needs of everyone during the recent round-the-clock lockdown. Residents who sought assistance through the government’s food programme received packages with the help of volunteers who operated much as they did after the 2017 hurricanes.

“We put a lot of systems in place on Virgin Gorda — and it’s a continuous process — to make sure if anything happened like what happened with Hurricane Irma and Maria, that we wouldn’t need as much external assistance,” Mr. Wheatley explained.

Mr. Wheatley said they helped start a hot-meal programme separate from the government-funded food assistance to support Virgin Gordians. They started serving 150 meals weekly; as it became clear people would need more assistance and more people contributed, the programme expanded to four days a week. Volunteer businesses prepare the meals on a rotating basis, and the crisis response team helps deliver. Mr. Wheatley said the programme is designed to run for months if needed.

One key element in its success is a clear understanding of the community’s needs, he said, adding that the team developed a database of people requiring assistance.

Mr. Wheatley said residents are also ramping up fishing and farming, with some taking advantage of the government’s $2 million stimulus for the industries.

“Food security is a very important thing for us to be considering right now, because we’re not sure where this whole pandemic is going to lead,” he said. “We saw earlier where America confiscated some medical supplies. It’s a matter of time before food becomes an issue.”

Opportunities to expand agriculture don’t end at the border. Government, he added, is considering leasing land in Guyana and other areas in the Caribbean for farming. The employees working at the farms would likely include residents from both the VI and Guyana, he said.

Many sister island residents are also taking matters into their own hands. Ms. Flax-Brutus, for example, has planted chives, soursop, lettuce and other produce in her garden since the start of the Covid-19 lockdowns.

Residents noted that such efforts are more than a way to pass the time: They mark a return to self-reliant farming that is necessary as the particularly vulnerable sister islands face economic uncertainty.

Construction projects are also in the works on VG, and staff laid off from resorts and other tourism-based facilities may be able to find work rebuilding roads and completing capital projects, Mr. Wheatley said.

“Recreational grounds will be high up on that list of things to do,” he said.

Government also recently launched hurricane-recovery projects on the island, including $1.8 million in contracts for reconstructing administration buildings and a $1.7 million contract for the third phase of repairing the Bregado Flax Educational Centre.

Mr. Wheatley said such employment initiatives are especially important on VG because it has a larger population, of some 4,000, compared to a few hundred each on JVD and Anegada. He added that the projects will help achieve the difficult balance between public safety and economic health.

“Until there is a vaccine, there is going to be a great amount of anxiety in every single economy in this world,” he said. “We’re going to be in for a very uncertain time for the foreseeable future.”

On Anegada, the community has responded in a similar manner as on VG.

A group known as the Anegada Resilience Team worked to identify vulnerable individuals during the lockdown, and it plans to continue looking out for them heading into hurricane season, according to ART President Lorraine Wheatley, owner of the Anegada Reef Hotel.

Ms. Wheatley also said life on the island has been slowly returning to a sense of normalcy.

“The hardest part of the lockdown was in the beginning, when the fishermen were not able to go out,” she said.

Now that businesses are reopening and the ferries are back in service, Ms. Wheatley said residents can at least get to Tortola for groceries and banking.

While everyone works out the kinks of reopening, Ms. Wheatley said she hopes Tortola residents understand some of the limitations faced by their counterparts living on sister islands.

Anegada residents have only a few hours to run errands in Road Town in order to catch the return ferry in time to be home for the evening curfew. She said those who get the chance to move up in line at the bank do so because of these added restrictions, and she asked that people be patient.

Residents on tourism-dependent Jost Van Dyke face similar challenges, and they are responding with similar solutions.

JVD resident Susan Zaluski, director of the Jost Van Dykes Preservation Society, said one particularly useful tool is a group WhatsApp chat with many VI leaders, including the premier and ministers, and about 100 JVD residents.

This channel of communication has been helpful to those with an internet connection, especially during the recent lockdowns.

“When they extended the lockdown for the extra seven days, [government] actually provided food,” she added. “That was one of the major concerns, because if you live on Jost Van Dyke … everyone was concerned about trying to get through to the different food purveyors. Then the problem arises that even if you could find a delivery driver, you didn’t have any way to get cash to them because you were on a different island.”

Ms. Zaluski said grocers and Christine’s Bakery facilitated deliveries. Adam Turbe, a JVD-based fisherman, also provided fresh fish and lobster deliveries to homes. With the island’s relatively small population, she added, these individual efforts were essential, and it was a tough blow when fishers weren’t allowed to go out during the earlier part of the curfew.

“Because Jost Van Dyke was in a disadvantaged position, [government] gave out food to pretty much every household,” she said, detailing how volunteers distributed 160 food packages. “I think the only time that Jost Van Dyke had a really difficult time was being told that we couldn’t go out to get our own resources.”

The cost of taking the ferry to Tortola and securing transportation to make a grocery run can add up, placing an additional burden on residents as everyone in the territory worked to stock up for the lockdown on short notice.

Thomas Warner, a manager at White Bay Villas on JVD, has been using social media to prompt discussion about plans for gradually reopening the tourism industry.

The VI has not announced a date when tourists will be allowed to visit again, though belongers and permanent residents are slated to be allowed to return beginning June 2. As a stopgap measure, Mr. Warner proposed at least allowing chartered yachts to start operating soon under restrictions.

Since most yacht guests stay on their boats, he explained, the industry has a built-in mechanism for social distancing.

Mr. Warner said the number one priority is ensuring safety, and he admitted that not everyone is sold on reopening as quickly as he would like. But he added that having a flexible plan in place could help tourism businesses plan for the future.

Many, he pointed out, need to decide soon whether to tighten their belts and maintain their staff numbers for now, or to advise work-permit holders to return to their home countries until the borders open.

Either way, he noted that competition for tourism dollars in the Caribbean is about to get tougher, and it will be important for business owners and government to collaborate on how to protect the livelihoods of residents.

Though many challenges remain, especially with so many unknown factors at play, Mr. Wheatley encouraged residents to explore ways to build new skill sets if they have any downtime. For example, the minister pointed to Harvard University’s recent decision to offer 67 free online courses, with subjects including programming, health and medicine, computer science, business and humanities.

“I urge persons to take advantage while you’re at home to retool yourself,” Mr. Wheatley said, emphasising the importance of learning basic computer skills as businesses shift online.

The government, he said, is learning too.

“In this pandemic, we are all in this together,” the minister said. “We’re all learning and taking copious notes as we go along. In case it should happen again, the persons behind us will know what we did. We made some very difficult decisions.”