What started as a temporary test run around the holidays a few years ago has turned into a free, regularly scheduled public shuttle service for Road Town. Leaders stepped aboard …

END_OF_DOCUMENT_TOKEN_TO_BE_REPLACED 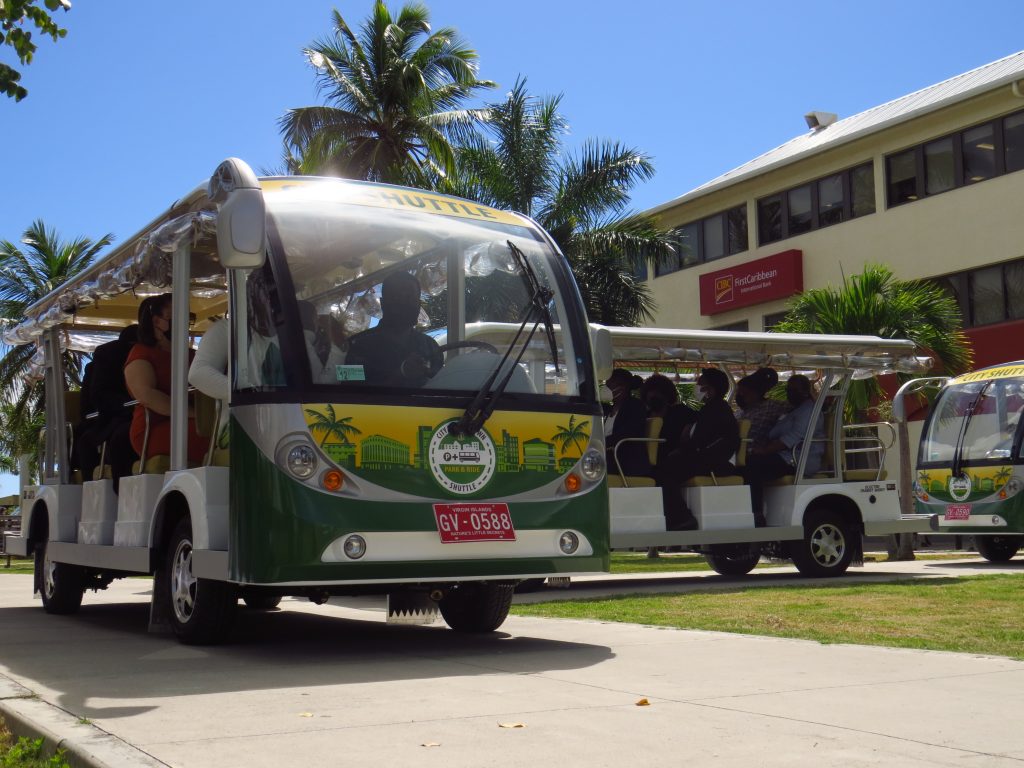 The government launched a fleet of six new electric shuttles — decorated with blue, green and yellow cityscapes in honour of the Virgin Islands flag — to serve Road Town on weekdays. (Photo: DANA KAMPA)

What started as a temporary test run around the holidays a few years ago has turned into a free, regularly scheduled public shuttle service for Road Town.

Leaders stepped aboard the six new electric shuttles that will be serving the downtown community during a launch ceremony Feb. 3 at Noel Lloyd Positive Action Movement Park.

Residents and tourists alike will be able to ride the six shuttles, two of which are enclosed and air-conditioned.

The cost for the whole fleet came to $178,000, according to Transportation, Works and Utilities Minister Kye Rymer.

He said the service “is just one component of a comprehensive initiative to improve the city.”

“This project will provide central transportation services within the Road Town community,” the minister said, adding that the effort will be ever more important as the capital grows with limited land space available.

Steady increases in the number of cars registered in the VI have challenged city planners to be innovative, Mr. Rymer added.

Surveys conducted in the summer of 2019 showed that the 2,000 respondents saw a need for public buses, prompting government to run a pilot project later that year.

Mr. Rymer said the seven-day trial drew “great reviews” from passengers, averaging about 70 people per day. When government executed a stimulus for taxi drivers on Tortola and the sister islands at the beginning of the pandemic, he said average daily ridership rose to 200.

Each battery-powered shuttle can carry 15 passengers, runs off electricity, and is capable of travelling 50 miles on a full charge, officials said. Mr. Rymer added that the shuttles won’t travel faster than 25 miles per hour.

Parking by Dr. D. Orlando Smith Hospital and the Festival Village Grounds will remain free for now, he said, but in the future paid parking might offset the cost of maintaining free public transportation. Future plans also include the installation of charging stations.

Mr. Rymer said he hopes the availability of such stations combined with the recent suspension of import duties on sustainable products like electric cars may prompt more residents to consider making the switch from combustion engines.

“My team at the ministry and I continue to stand firm on our vision to provide a high standard of internationally accepted public infrastructure and utilities,” he said. “We remain committed to the growth and development of the Virgin Islands to support residential and business communities.”

Premier Andrew Fahie, who spoke alongside other ministers on Feb. 3, said now is the time to double down on green initiatives, both through infrastructure and legislation.

He added that priorities include passing a new waste management bill, legislation to reduce plastic containers, and a policy for disposing of fats, oils and grease to preserve the city’s sewerage system.

Also at the ceremony, Deputy Speaker Neville Smith implored the TWU Ministry to develop and execute a maintenance plan to keep the new vehicles in good shape. Health and Social Development Minister Carvin Malone stressed the importance of investments in improving sidewalks to make the city more accessible.

At the ceremony’s conclusion, Reverend Dr. Keith Lewis of the Methodist BVI Circuit blessed each vehicle before they rolled out of the park and onto the streets for a test drive of the new route.

The shuttles depart from the Ralph T. O’Neal Administration Complex and make 20 more stops along their figure-of-eight route through town before returning to the administration complex.

The stops include several major businesses, schools and the hospital.

The initial schedule runs from 7 a.m. to 6 p.m. every Monday through Friday, with departures every 15 minutes.