Over the past week, one new case of Covid-19 was confirmed in the Virgin Islands, and the number of residents being tested and quarantined continued to rise. But the newest …

END_OF_DOCUMENT_TOKEN_TO_BE_REPLACED 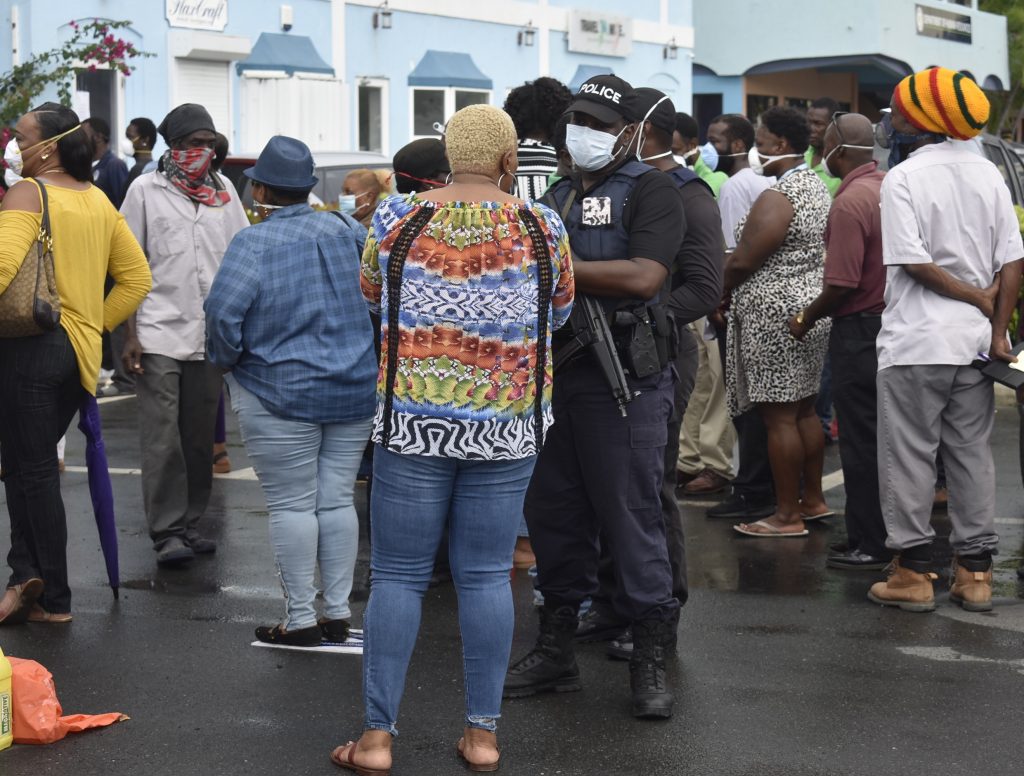 A police officer speaks with a woman in front of a Road Town bank on Monday. (Photo: JOEY WALDINGER)

Over the past week, one new case of Covid-19 was confirmed in the Virgin Islands, and the number of residents being tested and quarantined continued to rise.

But the newest batch of Covid-19 test results, announced Sunday, show that the Virgin Islands has not recorded any new cases since Friday, when it was announced that the sixth VI resident had tested positive for the disease.

Officials also said a resident was being isolated at the Covid-19 facility at the Dr. Orlando Smith Hospital.

According to a Sunday press release from the Ministry of Health and Social Development, ten samples tested by the Caribbean Public Health Agency all came back negative.

But as of Beacon press time yesterday afternoon, officials had not announced the results from five further samples.

Ten residents went into quarantine between Friday and Sunday, with the numbers jumping from 189 to 199, according to figures provided by the ministry.

Earlier this month, the number of quarantined residents had fallen to five, but this number skyrocketed when a 52-year-oldwoman was admitted to the hospital after displaying symptoms consistent with the disease on April 15, and the entire apartment complex where she lived was quarantined, said Deputy Premier Carvin Malone, who is also the minister of health and social development.

The woman, whose test came pack positive for Covid-19, died about three days after being admitted to the hospital.

With Sunday’s results, 114 people in the territory have now been tested for the disease, with 103 testing negative, six testing positive, and five still awaiting results, according to the press release.

Three residents who fell ill with Covid-19 have since recovered, and there are two active cases in the VI, the release noted.

The territory has more than 1,400 test kits at its disposal: 960 donated by Public Health England arrived in the VI the second week of April, on top of the 480 donated the week prior, Governor Gus Jaspert said on April 11.

As of Saturday there had been 2,893,729 cases globally and 10,402 cases in the Caribbean region, according to the press release.

In this region, the Dominican Republic has been hit hardest by the virus, with more than 6,000 total confirmed cases as of Tuesday and almost 300 fatalities, according to the Bing Covid-19 tracker.

While other large regional municipalities recorded caseloads breaking the thousands — including the United States territory of Puerto Rico, where 1,400 people have been infected and 86 have died — some of the smaller territories recorded single-digit figures.

In Anguilla, which as of 2018 had a population of less than 15,000, only three cases have been confirmed, and they have all since recovered, according to the Covid-19 tracker.

But it is unclear how quickly regional governments, even in countries that have been relatively unscathed, will be able to recoup the economic losses resulting from suppression efforts, according to a World Bank report issued this month, titled “Economy in the Time of Covid-19.”

“While a quick rebound cannot be ruled out, the magnitude of the disruptions created by the Covid-19 epidemic is such that effects could also be long-lasting,” stated the report, which examines Latin America’s and the Caribbean’s financial prospects post-coronavirus.

If enough firms collapse, they could initiate a chain of bankruptcies that amplifies the economic consequences, prompting households to increase their saving and reduce spending, and solvable firms to forego investments, the bank stated.

“A temporary freeze of the economy to slow down the spread of the Covid-19 epidemic could thus become a permanent shock, and instead of a quick rebound a protracted recession may settle in,” according to the report