After his previous contract expired last month, Claude  Skelton-Cline is still working as a government consultant, he said in a recent interview with 284 Media.  But Mr. Skelton-Cline, who has …

END_OF_DOCUMENT_TOKEN_TO_BE_REPLACED 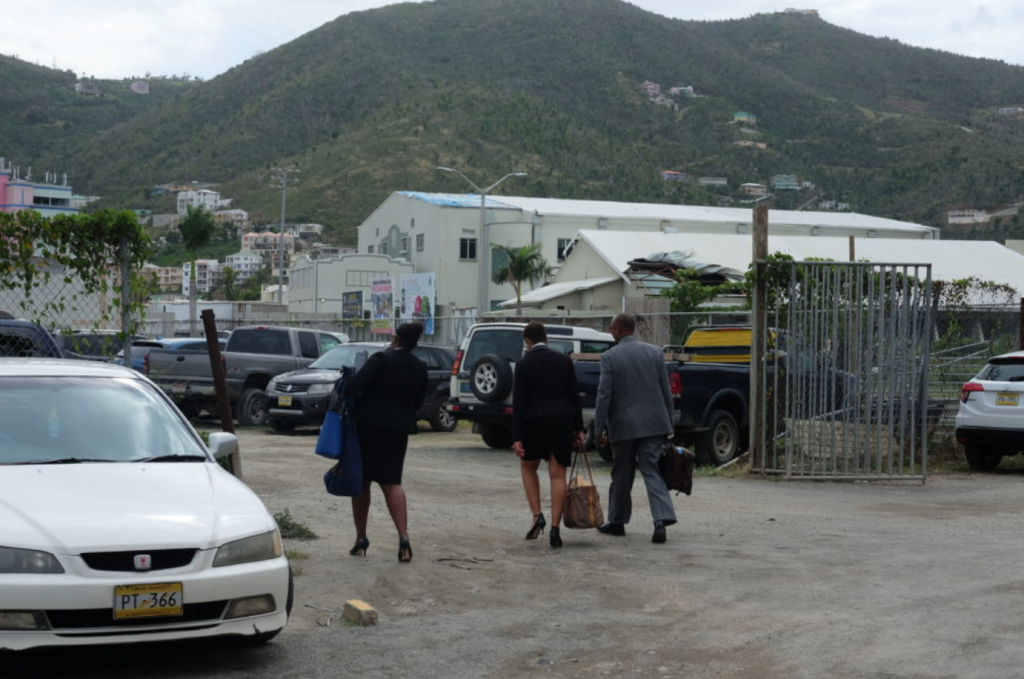 Claude Skelton-Cline and his attorneys leave High Court in 2018, two years after he sued government for not renewing his contract as acting managing director of the British Virgin Islands Ports Authority. (File Photo: AMANDA ULRICH)

After his previous contract expired last month, Claude  Skelton-Cline is still working as a government consultant, he said in a recent interview with 284 Media.

But Mr. Skelton-Cline, who has provided government consulting services since April 2019 and previously served as the acting managing director of the BVI Ports Authority, was tight-lipped about the details of his most recent contract.

“I do whatever [PremierAndrew Fahie] asks of me,” Mr. Skelton-Cline told 284 Media on Sept. 16, adding, “I am responsible for identifying new developments, new revenue streams, in terms of bringing new job opportunities, new entrepreneurial opportunities to the country.”

However, the consultant declined to provide details, explaining that he “cannot report with any specificity what we are working on. I can say there are two major projects … that are in tow right now.”

He also did not say when his contract was renewed or extended, nor how much he is currently being paid, and 284 Media anchor Jovan Krystal Wilson did not press him further on such details during the interview.

Mr. Skelton-Cline did not return messages from the Beacon, and neither did Mr. Fahie, government Communications Director Arliene Penn, or Chief Information Officer Desiree Smith.

Though Mr. Skelton-Cline’s previous two contracts were noted in weekly summaries of Cabinet meetings, the Cabinet Office stopped issuing such notices during the territory’s coronavirus outbreak, and Cabinet Secretary Sandra Ward said she was unable to provide further information even though her office is working to resume the regular summaries.

In April 2019, less than two months after Mr. Fahie’s Virgin Islands Party came to power, Mr. Skelton-Cline’s firm Grace Consultants was hired by government, which said he would work on a wide range of projects over a six-month period.

As part of this $98,000 no-bid contract — just shy of the $100,000 threshold that requires a tender process or a Cabinet waiver — Mr. Skelton-Cline was charged with advising on the creation of a “climate resilience and renewable energy unit;” leading negotiations on the development of Prospect Reef; establishing new terms of services from the territory’s telecoms providers and a new cruise line berthing agreement; and helping to execute the premier’s “1,000 Jobs in 1,000 Days” programme, government stated in a press release at the time, though the contract itself was never released.

Mr. Skelton-Cline was also enlisted  to serve as chair of a “Cruise Tourism Committee” and help launch a seaplane excursion initiative, according to the press release.

Upon awarding this contract to Mr. Skelton-Cline, Mr. Fahie promised a public report detailing his accomplishments once the contract’s term expired.

“When you sign a man with a contract, if the deliverables don’t come, he’s in trouble.”

But the promised public report never materialised. Meanwhile, Prospect Reef remains in tatters with no plan insight, and no comprehensive announcements have been made about new cruise line berthing rules, the climate change programme, new telecom terms, or the seaplane plan.

Although Mr. Skelton-Cline and elected leaders have publicly discussed the “1,000” days programme on occasion, no detailed report has been provided about how many jobs have been created or other details.

Nevertheless, toward the end of the initial six-month period, government handed Mr. Skelton-Cline another no-bid deal as a government consultant, this time from Sept. 18, 2019 until Aug. 17, 2020 at a rate of $12,000 a month.

This monthly fee would only be paid “upon presentation of invoices … accompanied with status reports of the promised deliverables,” according to a summary of a Nov. 22, 2019 Cabinet meeting provided by the Cabinet Office.

However, it was unclear exactly what projects Mr. Skelton-Cline was engaged to accomplish this time around, and no contract, reports or invoices have been released to the public.

Mses. Penn and Smith did not respond to requests for the status reports and copies of Mr. Skelton-Cline’s current contract.

While his exact engagements with government remain unclear, Mr. Skelton-Cline’s most visible public endeavour is his radio show “Honestly Speaking with Claude Skelton-Cline,” which airs Tuesday nights and often features conversations between the consultant and elected officials.

During his time in the public service, Mr. Skelton-Cline often found himself mired in controversy.

In 2016 he sued the government over its decision not to renew his contract at the BVIPA, though his case was eventually dismissed by the High Court.

Additionally, a government-contracted review of the project found that the BVIPA had repeatedly violated its own procurement procedures, which themselves did not fully accord with the law, and did not produce several of the documents that the reviewers requested.

Mr. Skelton-Cline, however, has repeatedly defended himself against accusations of impropriety, and continued to do so during his Sept. 16 interview with 284 Media.

“There are a myriad of contracts that’s issued in these Virgin Islands, and seldom do you hear anything about any of them,” he told Ms. Wilson.

“But when it comes to Claude Skelton-Cline, I understand that I can be a lightning rod given who I am and the voice that I lend to this country.”